Beatrice Valdez Ximénez, sculptor, was born in Graytown, Texas, on November 5, 1904, the youngest of five children of Juan and Josefa (Caballero) Valdez. She grew up in San Antonio and received no formal education. She married Pedro Ximénez in 1923, and the couple settled in Floresville, where they had one daughter and six sons. Beatrice Ximénez learned to work with cement while helping her husband produce and sell cement furniture fashioned to look like wood. In the 1930s Pedro Ximénez had learned the faux-wood technique from Dionicio Rodríguez and Sam Murray. In addition to furniture, the Ximénezes used the technique to make cement faux-wood buildings – including a store, a gas station, a dance hall, cottages, and a barbecue pit – on their Floresville property.

Eleven years after Pedro died (1956), with her children grown and having children of their own, Beatrice decided to use cement in a new way. Inspired by children's books, science fiction movies, and television nature programs, she began making creatures she called animales feos [ugly animals]. She made her first sculpture, a dinosaur, at the request of one of her grandchildren, and her grandson Johnny Verduzco frequently helped her with the more strenuous parts of the sculpture process. She started by fashioning a framework of metal reinforcing rods, covered with mesh fastened with wire. She then coated this armature with three layers of cement, mixed with sand and dyed a bright color through a secret process. Ximénez ornamented her figures with an imaginative array of objects: scallop shells became a monster's skin, jeweled earrings doubled as alligator eyes, and a cow's skull was transformed into a zebra's head. She completed about fifty life-sized figures over a twenty-two-year period, forming a yard-art installation that has been described as a "bizarre wild kingdom," which included an elephant, a giraffe, a tiger, a beaver, a deer, a monkey, a two-headed dog, and other animals wild, domestic, and imaginary.

Several of Ximénez's sculptures were included in Handmade and Heartfelt, a 1986 touring exhibition organized by Texas Folklife Resources, and in 1987 she presented a workshop on cement sculpture at the Guadalupe Cultural Arts Center in San Antonio. Only a few other Texas women of Mexican descent, including Consuelo González Amezcua and Alice Dickerson Montemayor, have established reputations as artists. Beatrice Ximénez died on June 26, 1989. Many of her sculptures are in private collections. 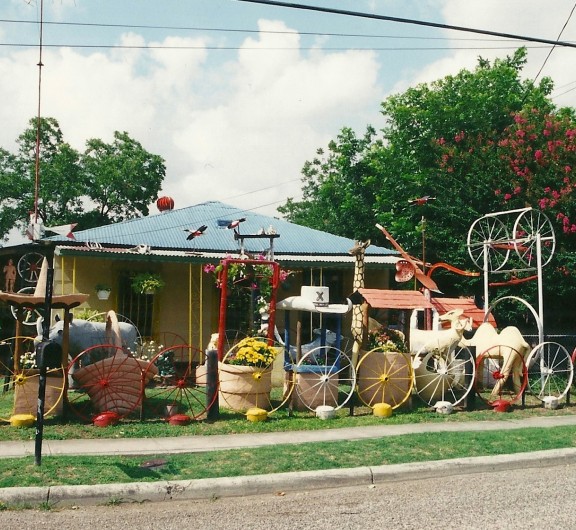