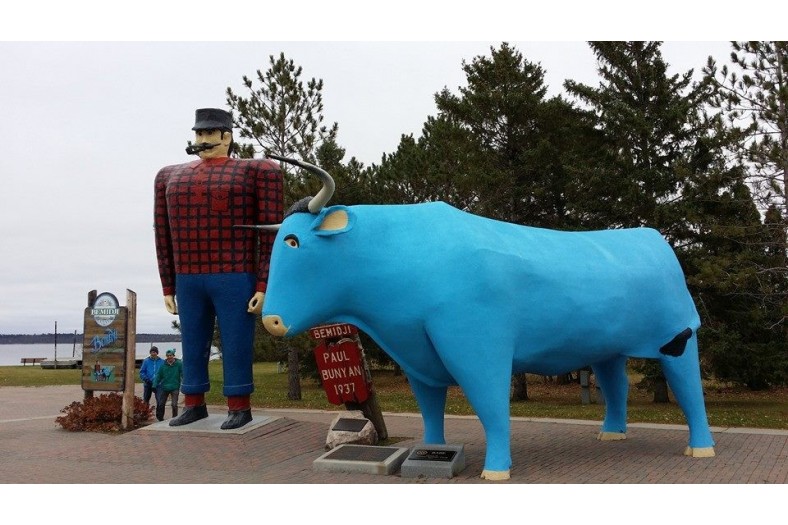 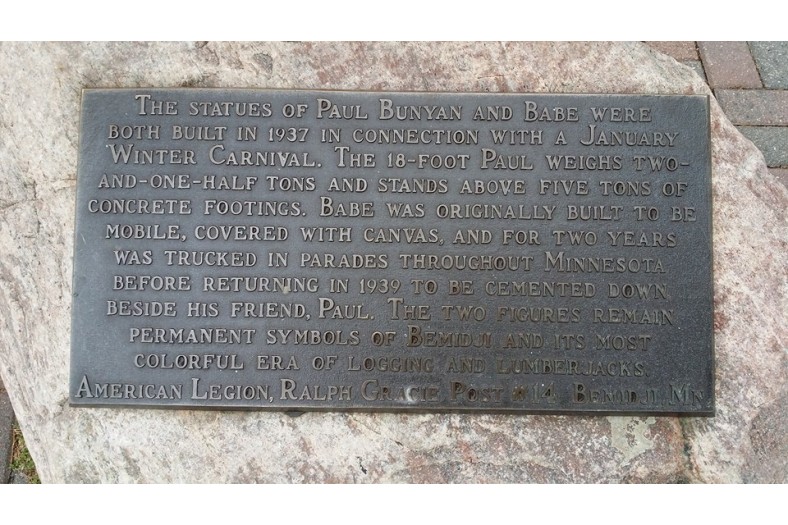 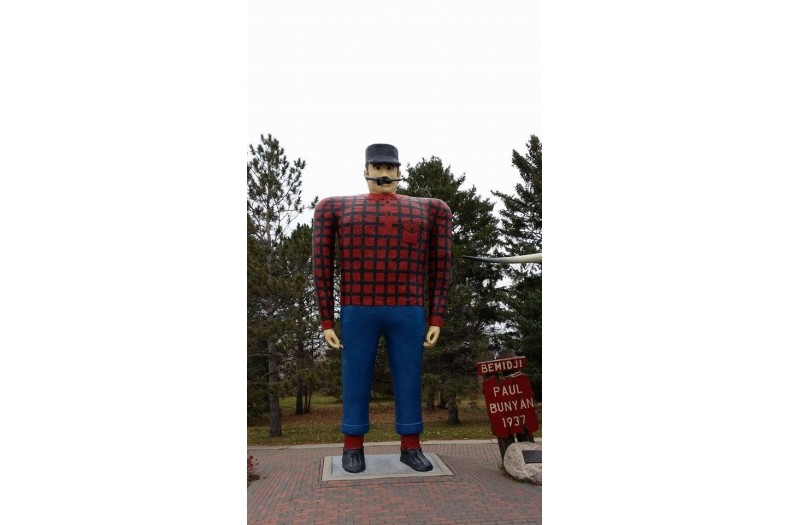 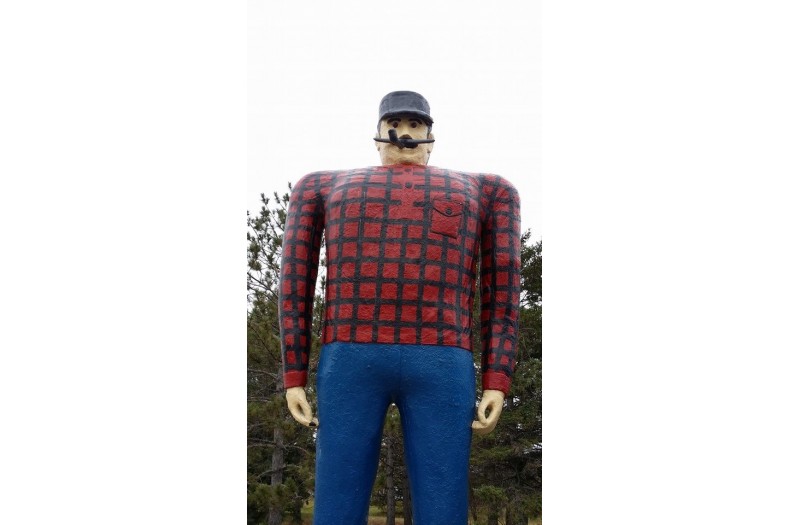 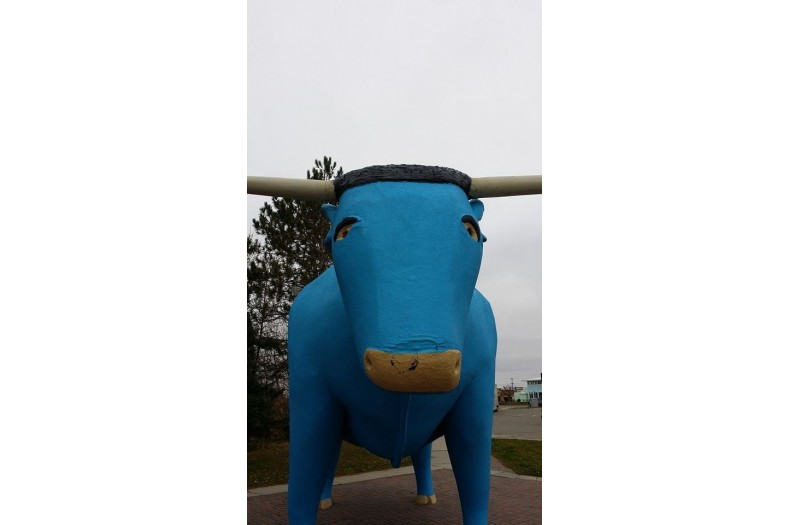 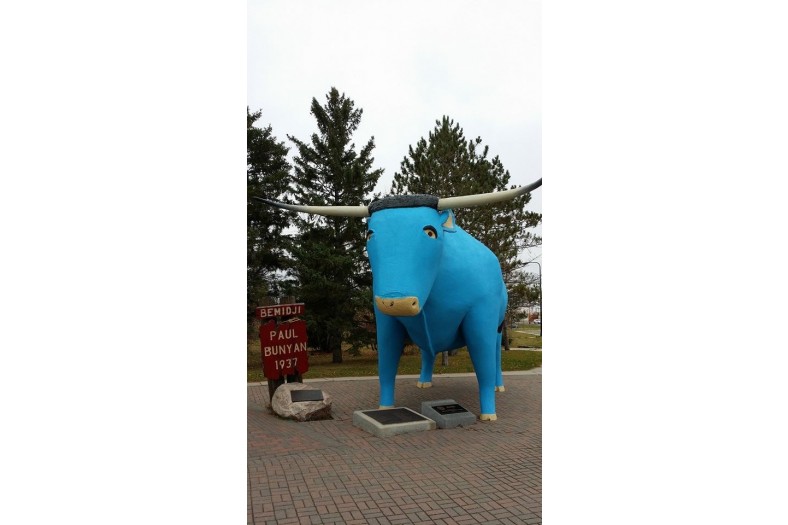 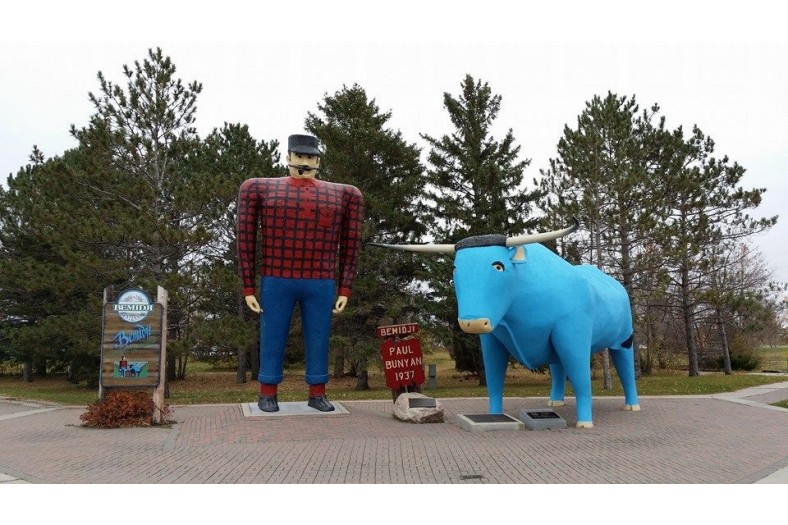 Two statues, designed by different artists, have been installed nearby each other since the late 1930s in order to pay homage to the legend of mighty woodsman Paul Bunyan and his monumental helper, Babe the Blue Ox. These folk heroes were chosen as the subject for Bemidji’s monumental public artwork given its early history as a center for logging and lumber production.

The figures were proposed in early 1937 as an accompaniment to Bemidji’s Paul Bunyan Carnival, itself an event organized to promote local tourism and take advantage of the dramatic increase in pleasure outings taken by new automobile drivers. Cyril Dickinson of the local Dickinson Construction Company was asked, as his part in organizing the festivities, to construct a figure of Paul Bunyan; he agreed to do so, using the figure of Earl Bucklen, then mayor of Bemidji, as his model. Choosing a site by the side of Lake Bemidji, 5 ½ tons of concrete footings below ground were used to anchor the figure, which was scaled up three-to-one from Bucklen’s measurements. Above the footings, the sculpture was constructed with a wooden infrastructure, with steel reinforcing bars forming the figure’s outline. Heavy steel laths were layered over the reinforcing bars, and then covered with concrete mortar. Steel bars reinforce the underground footings and continue up through the legs of the figure in order to resist the high winds sometimes found in this area. It is estimated that the weight of the 18-foot-high statue is 2 ½ tons (excluding the footings), and it was recorded that 737 man-hours were needed to complete construction. The mustachioed concrete figure, with overly boxy and broad shoulders, is painted annually prior to the summer tourist season; in the winter it is sometimes dressed in sweaters and funny hats.

The Bemidji Rotary Club was given the responsibility of creating the Babe sculpture; they delegated the construction to James Payton. Payton used a large pair of oxen owned by the administrators of a local logging camp as his models; as with the Bunyan statue, they were scaled up on a three-to-one ratio, although the distance between the front legs was increased so as to allow a truck to pass underneath and support the sculpture.

Babe was built on a wooden infrastructure and put together at a local boat company’s workshop. Wire lath was used to sheath the wooden ribs, and then the lath was covered by a fiber padding such as was used at that time to insulate refrigerators. It was finished off with a canvas covering. Babe’s horns, made of tin, measure 14 feet across; the eyes are automobile tail lights, connected to a battery so they can light up; and there is a pipe connected to the nostrils so that it looks like the animal is breathing heavily in the cold Minnesota air. Babe stands about 10 feet tall, is 9 feet wide at the front hooves, and measures 23 feet from nose to tail.

Babe was originally mounted on top of a truck and paraded through a variety of events to promote Bemidji’s tourism trade. However, this usage caused rather significant damage to the sculpture, so in 1939 the sculpture was “retired” and now is installed next to the Paul Bunyan statue. When this took place, the interior fiber padding and canvas coverings were removed, and were replaced with a concrete surfacing layered over the interior metal lath, then painted blue.

In 1988 both statues were added to the National Register of Historic Places. In 2006 the Rotary Club of Bemidji raised money to match a federal grant earmarked for conservation of the statues: most was to stabilize the footings so as to minimize the expansion and contraction caused by temperature shifts, but the work also addressed a 1-inch-wide crack in Babe’s back, which had been continuing to widen despite yearly caulking and repainting.

Although there are numerous Paul Bunyan statues stretching throughout the Midwest, the construction in Bemidji is said to be the first and the largest. The figures, installed in a public place, are always available for viewing. A webcam of the statues is set up on the Bemidji Chamber of Commerce website. 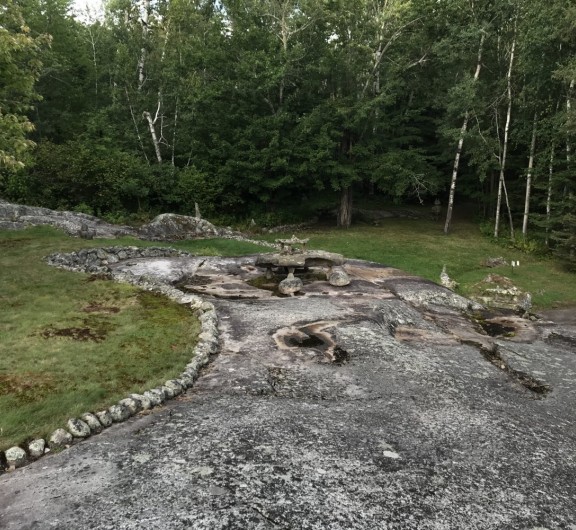