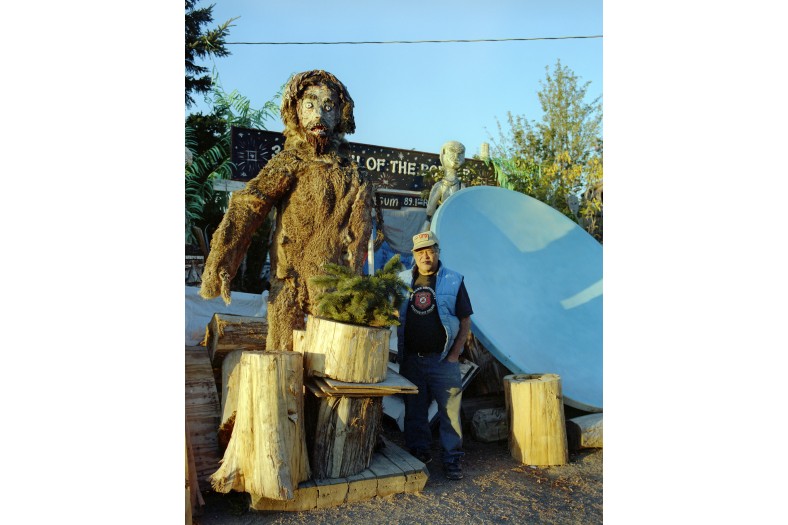 Behind a large wooden fence that was inspired by the movie Jurassic Park, Jerry Cardone crowded his ten-acre property with sculptures, signs, paintings, totem poles – and raw materials ready to be incorporated into more of the above. Representations of Native Americans, Christ, dinosaurs, and Santa Claus were common, but also well represented were works that focused on aliens from outer space.

Cardone, known to some as “The Dinosaur Man,” recounted that he died in 1984, but was ordered back to earth by God around 1995 in order to fulfill his destiny of making art. Yet he says that he was subsequently abducted by aliens; they first arrived because they were interested in a close-up view of his flying saucer observatory, installed on the roof of his home. Apparently they liked what they saw, and took him with them (although, rather inexplicably, they left Cardone’s constructed flying saucer behind). Cardone said he was abducted several times subsequently, and was even invited to permanently live with the aliens, but he declined.

Cardone’s creatures were made of a variety of found and recycled objects, including tires, animal skins and antlers, old car parts, tree trunks, and more. Many of his assemblages were colorfully painted, and some were fiercely aggressive in their appearance. The ten-acre property became so full that Cardone couldn’t drive his truck onto the property, nor could visitors walk through it without encountering obstacles. He commented at one point that he had to make his artwork look like junk so that it wouldn’t be stolen.

The town of Houlton did not approve of his work, however, and around 2005 took Cardone to court to address code violations. During several mediation sessions, he promised to clean up and clear the property, but he did not. Consequently, in 2010, Cardone was hauled into court again to address the same issues. When he admitted, during the trial on November 15, 2010, that most of the materials had decayed beyond the point of usefulness in creating art, Justice Allen Hunter ruled that the property was an automobile graveyard and junkyard under state statutes and a public nuisance under municipal ordinances. The ruling mandated that everything on the property, with the exception of one unregistered automobile, be cleaned up and cleared out by December 15 of that year, although they permitted Cardone to keep the existing artwork in a designated place on the property. Cardone, while removing twelve junked cars and other trash with help from neighbors and friends, apparently did not clean the property sufficiently to comply with the court’s ruling, so the town sent its employees to do the job, beginning in December and then, waiting for the snows to come and go, completing the cleanup in May, 2011. In total, it took them 427 hours, although the Houlton Town Manager, Doug Hazlett, made it clear that they didn’t use bulldozers, but carefully worked around Cardone’s artwork. However, the cost of staff time and the costs of removal were valued at $56,027, well over double the originally allocated budget of $25,000. Cardone will be expected to repay these costs; if he does not, a lien will be placed on the property and the funds will be recovered when he sells. Cardone did not try to hamper the cleanup efforts, and it has been reported that he is no longer living on site. 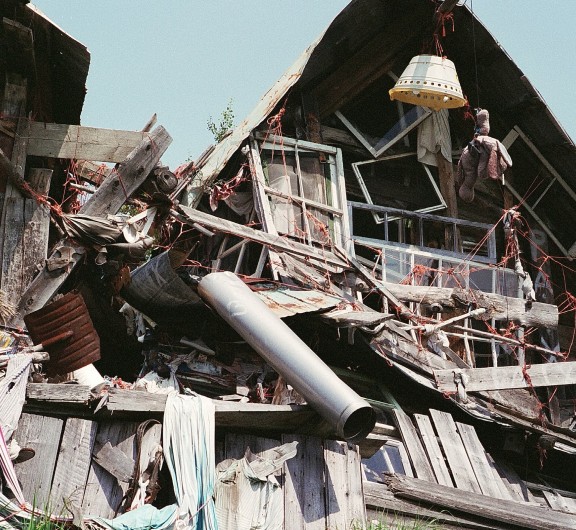