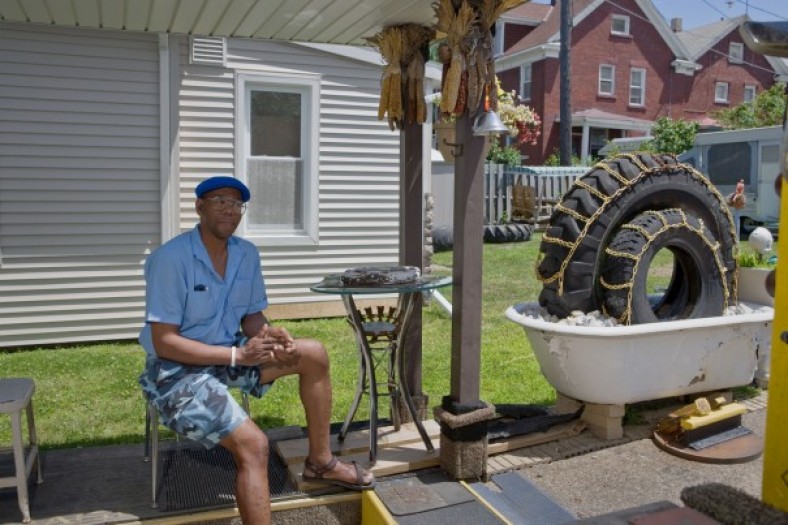 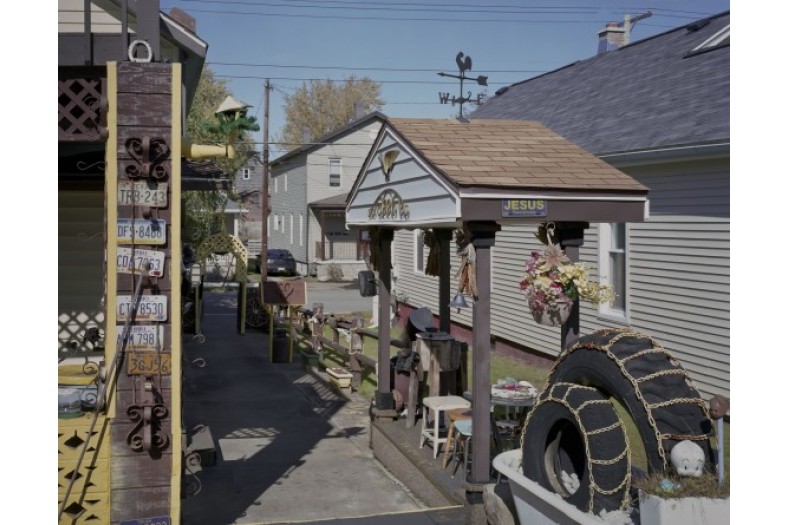 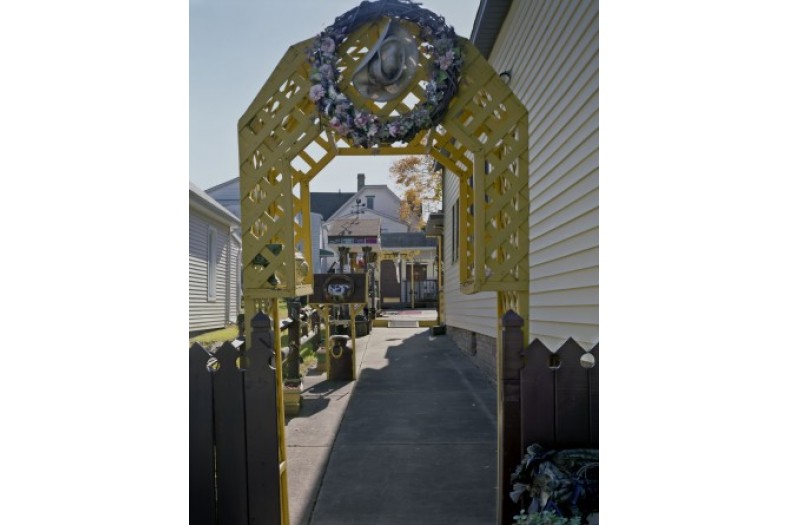 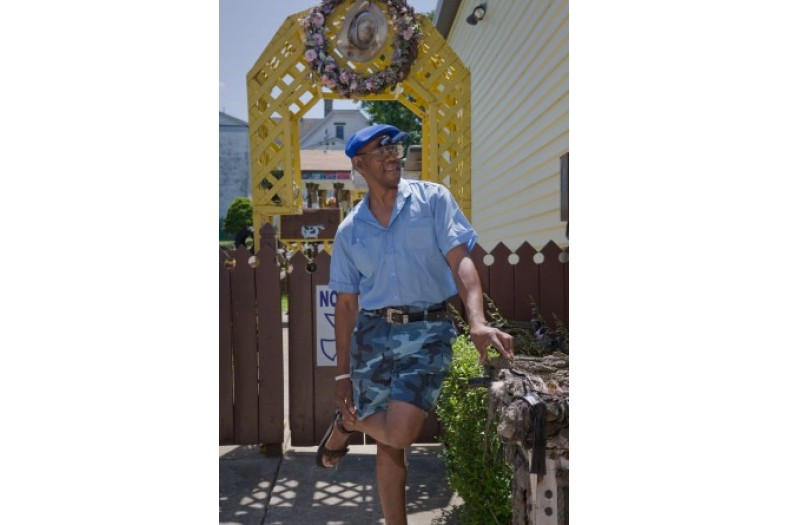 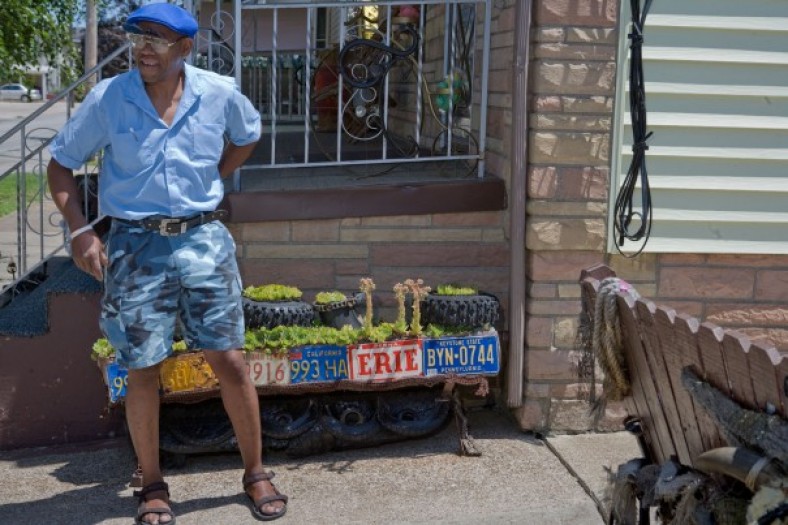 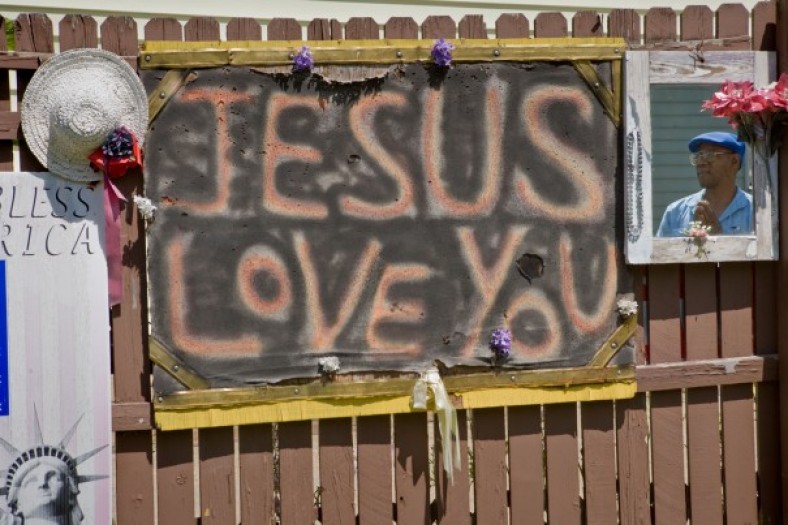 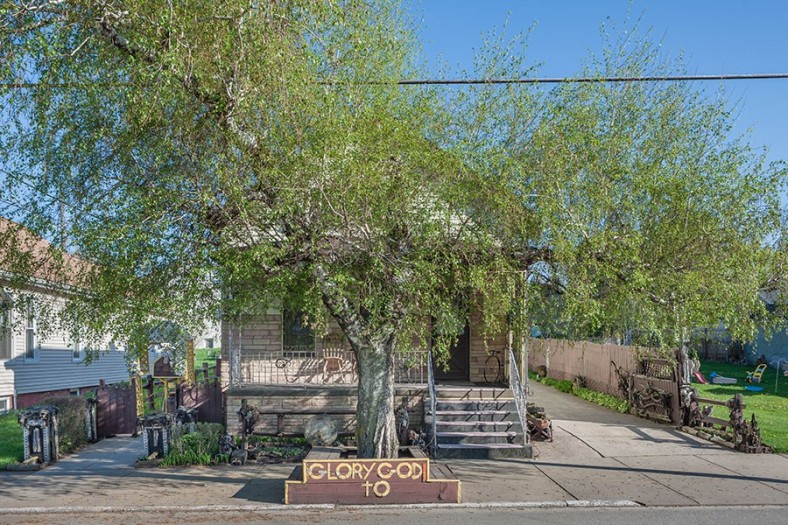 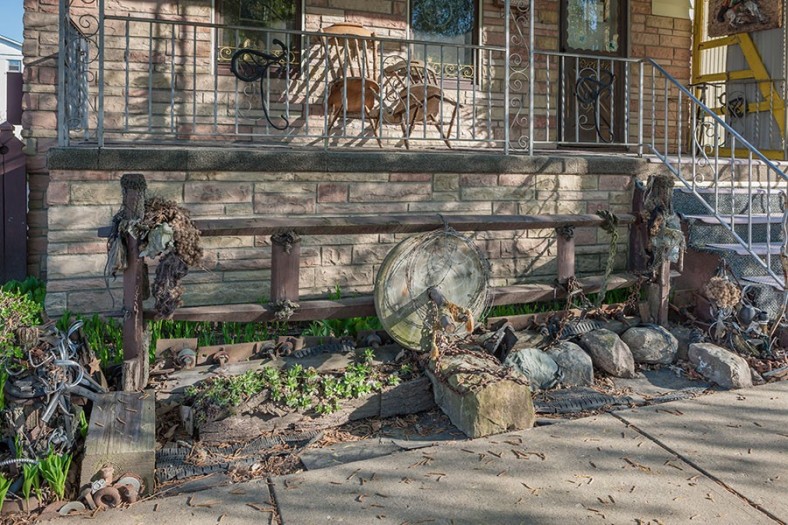 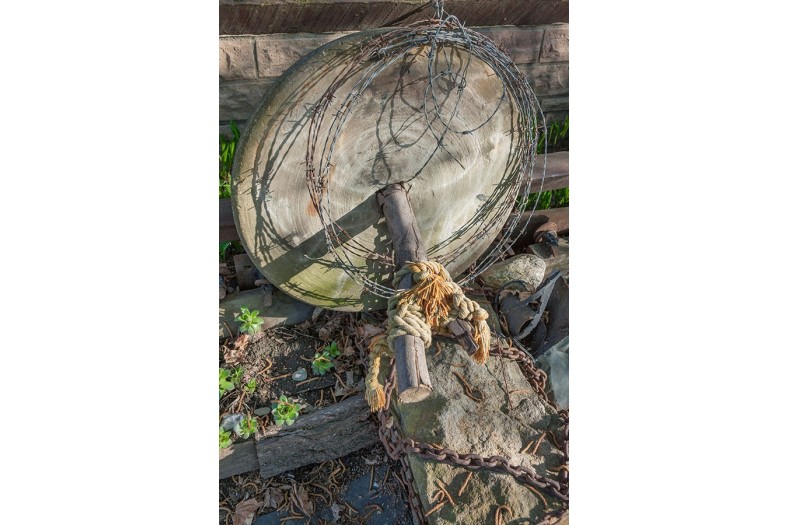 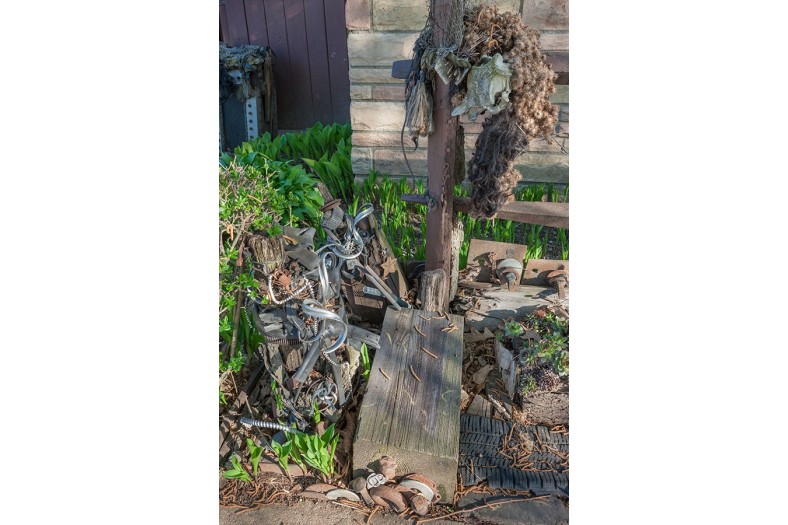 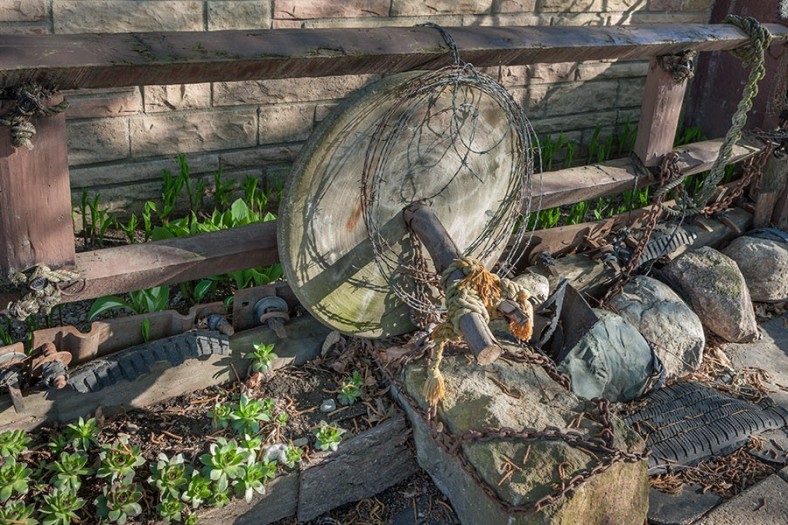 Willie Jordan has lived in Erie, PA since his birth in 1959. In the mid-1980s, he bought a house downtown on a somewhat secluded one-way street that ends nearby at another one-way street; he continues to live there today with his wife Marie.  After moving in, he began to decorate both the interior and exterior with discarded objects, offerings from friends, and his own personal collection of thrift store and yard sale finds. Intending to create an uplifting environment, he marked out his expanse of ‘good feelings for the world’ by painting the curbs in front of his property white to signify “purity—[as] there is so much evil in the world,” and he built an inviting public bench enclosure in front of his house that proclaims “Glory to God.” It surrounds his street’s only large sidewalk shade tree, encourages passersby to pause in his environment, and provides a place for “old people carrying their groceries on a hot day to sit and chill.” A framed mirror mounted on the outside of his property fence personalizes the message and overhangs a large hand-painted sign that declares: JESUS LOVE YOU. A three-meter-long latticework sign on the same fence proclaims HALLELULAH, next to a smaller vertical sign that reads Joy.

Jordan doesn’t own a car; he pedals gracefully down the street, banters with pedestrians, and often carries large bungee-corded loads on the back of his bicycle. A tech high school graduate with no art training, he made metal sculptures out of junkyard scraps as a teenager, and, as an adult, the blank inner and outer walls of his new house invited a fuller flowering of his art-making pleasure. He says he could have continued his education, but chose to take a secure job over an uncertain post-graduation future. He has worked almost thirty years in a truck rim forging factory, and his second shift schedule gives him daytime hours to work outdoors around his property.

In his later twenties, Jordan began to experience what he describes as “time transports.”  His mind goes back in history, and he feels his 21st century body to be present at past and distant events.  He has felt the power of ancient pyramids, but most often transports back to his more recent ancestors in the late 1800s. In front of an arched trellis he built over the sidewalk entrance to his property, short sections of railroad track at the base of rectangular steel-cornered markers are symbolic locators of an Underground Railroad stop [16, 18]. About one meter high, the tops of the markers are feathered with acorns, rope, fur, and twigs to suggest eagle nests [17], and Jordan saves food scraps to attract birds and animals to his site. On the opposite side of the house, two parallel wooden planks are secured to the ground by a series of railroad spikes and tie baseplates along the driveway entrance, and a hidden escape hatch entrance to the Underground Railroad is symbolized by a slight gap between the timbers [20]. Further up the driveway, a circular bark receptacle full of animal bones [22] symbolizes how “white people used to display the bones of black folks they had killed.” A few animal skulls are mounted in front, and Jordan laughs to recall one neighborhood lady remarking, “I know you’re a nice guy and all, but this looks like a Voodoo house!”

Back toward the garage, a large pair of black chained-down heavy equipment tires standing in a claw-foot bathtub full of white stones [02, 07, 08, 09, 10] symbolize “being stuck between a rock and a hard place—can’t escape, the state of the country....” Jordan refers to his visions of the 1800s as “my first life,” and a one-wheel antique tiller mounted off his garage in front of a weathered “scruboard” and above metal wash tubs [19] is an artifact from a life of manual labor planting the fields, as “we was too poor to have horses.” He patches parts of his milled property fence rails with scraps of bark [21]—rustic reminders of his “first life”—before the Great Migration of African-Americans from the rural South to urban factory jobs in Northern states in the early 1900s. The intensity of Jordan’s historical visions far exceeds everyday stream-of-consciousness or daydreaming; it appears somewhat analogous to a sleeping dream from which one awakes in a start, surprised to find that what seemed so real was just a dream, but Jordan’s travels occur while he is in a fully wakened state.

When he first entered a barrel vault installation space he had been offered at the Erie, Pennsylvania Art Museum, for example, he saw the presence there of escaped slaves passing through a section of the Underground Railroad. I was with him at the time and Jordan was visibly moved and shaken. He reports that the hair stood up on the back of his neck, and with no prior plans for that space, he created an installation based on that vision that hardly resembled anything he had ever done at his homesite [12]. Cut-out wood characters had individual names and stories, and, like events in real time, the installation charged and evolved as Jordan visited regularly over its approximately one year duration. Jordan’s installation at the Erie Art Museum has been his only public exhibition to date, and as a pure installation artist, he doesn’t typically make discrete art objects.  As he did for his installation at the Museum, he tends daily to his urban oasis home mixture of history, nature, neighborliness, and spirituality.

I first met Willie in 2009 after having just returned from visiting Leonard Knight at Salvation Mountain and gave him one of Knight’s postcard views of the Mountain. During my second visit Jordan remarked that he would coat the top of the mountain with glitter, and I was reminded of an Egyptian pyramid—the once polished-reflective white limestone shells topped with golden sun-reflecting capstones. Later he mentioned that one of his time travels had taken him back to the time of the pyramids. Recently Jordan added a two-sided, mirrored angel above the property fence at the sidewalk, hovering over the Underground Railroad hatch entrance [13, 14, 15].  Loud and clear, the silver trumpet-blowing angel reflects sunlight into the shadows of 17th Street and proclaims Jordan’s message of escape into spiritual enlightenment.

This site is on private property, but much of the installation is visible from the street.

Thanks to John Vanco and Kelly Armour at the Erie Art Museum for first bringing my attention to Willie Jordan’s site. 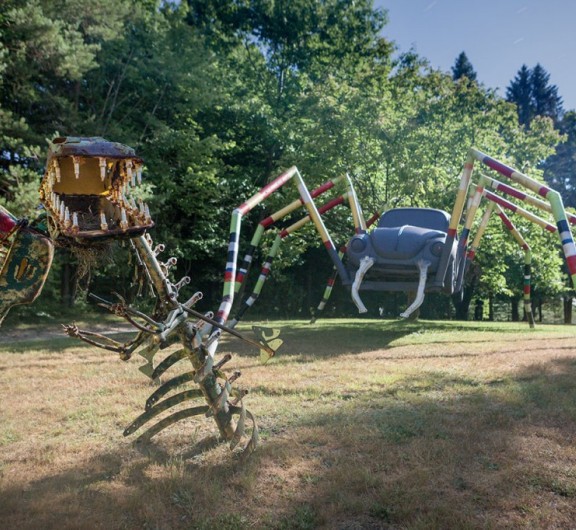 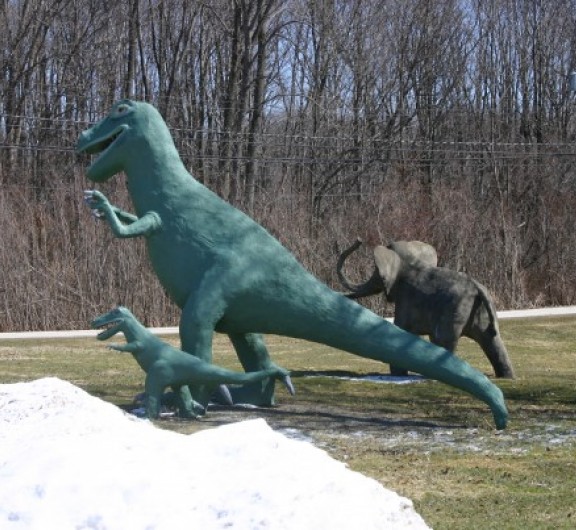 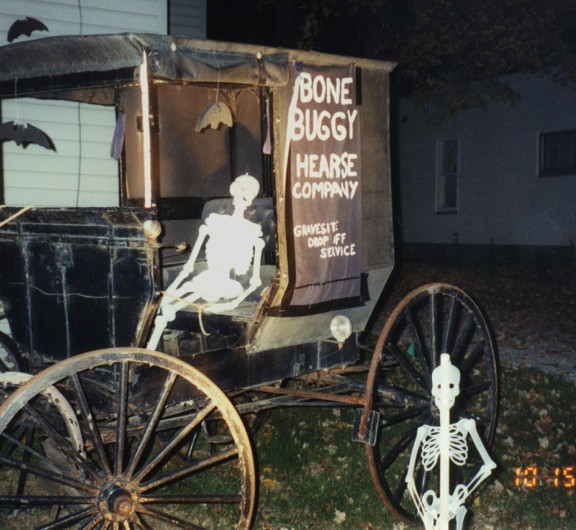 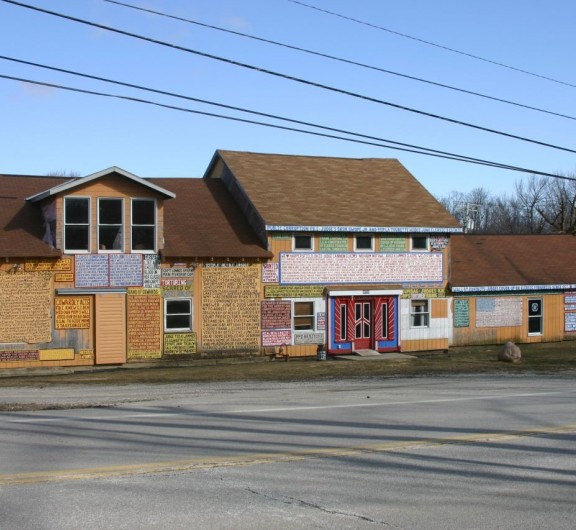 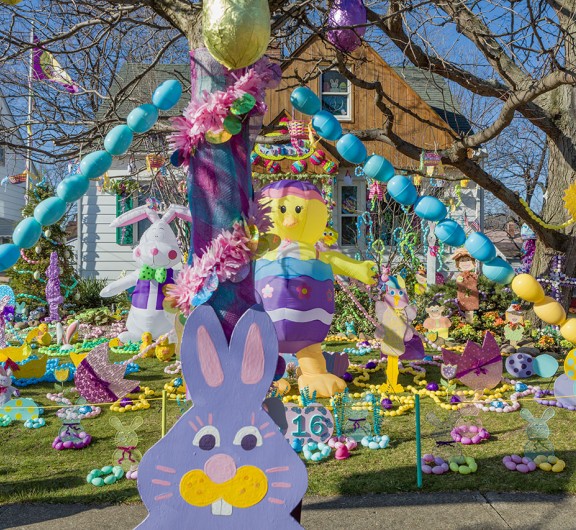 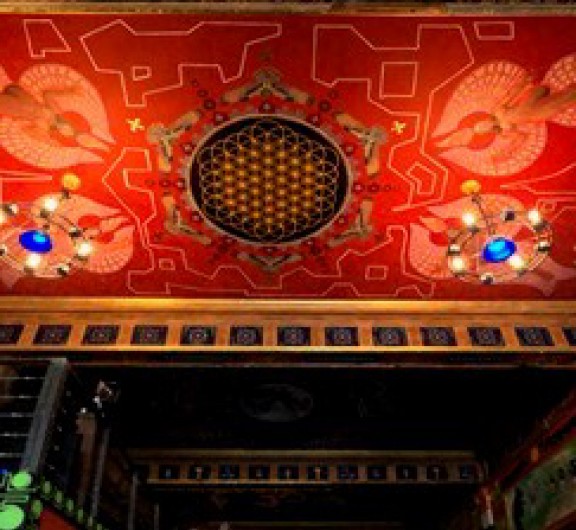