Art Environments That Almost Weren't... and One That Needs Help! 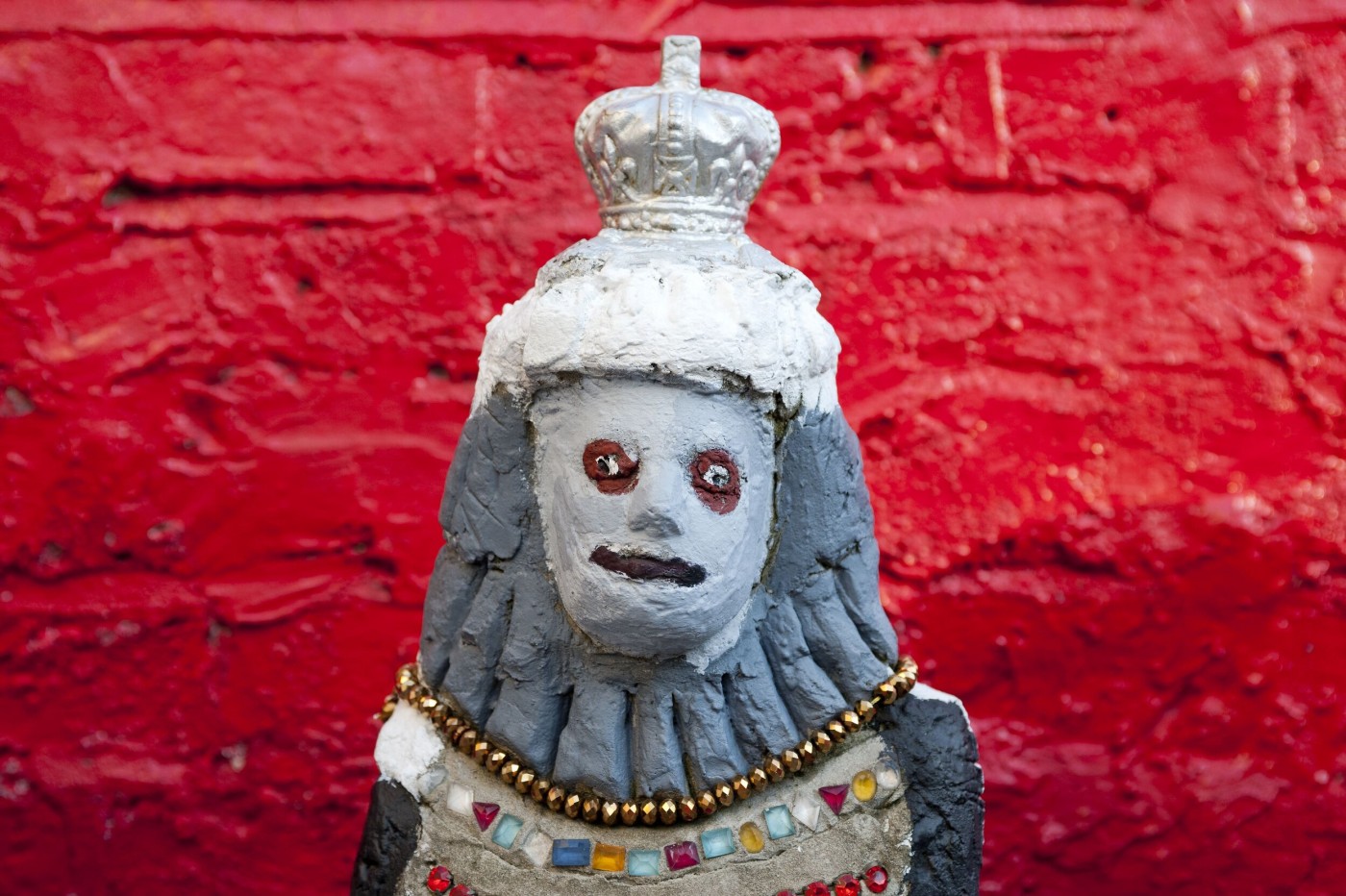 Art environment builders create works that encompass their entire homes, yards, and even beyond. But what happens when the creator passes away, moves, or loses control of the property? Many times, the in-situ site is dismantled, the original context lost forever. Any remaining works are then acquired by a gallery or museum collection and, in some unfortunate cases, discarded. As Lisa Stone notes “Like the mainstream historic preservation field, the history of the preservation of art environments is replete with heated political struggles, debates over methodologies, funding obstacles, ruinous “acts of God,” marvels of individual commitment and great collaboration, and the challenges of ongoing preservation.”

How can you help? Other than financially, these environments thrive on community support. In theory, city officials are beholden to their citizens, and a vocal positive community opinion can make all the difference.

The Watts Towers in Los Angeles was the first art environment to be listed in the National Register of Historic Places, added on April 13, 1977. The Watts Towers are also a National Historic Landmark, the highest landmark designation in the country representing significance “to all Americans.” 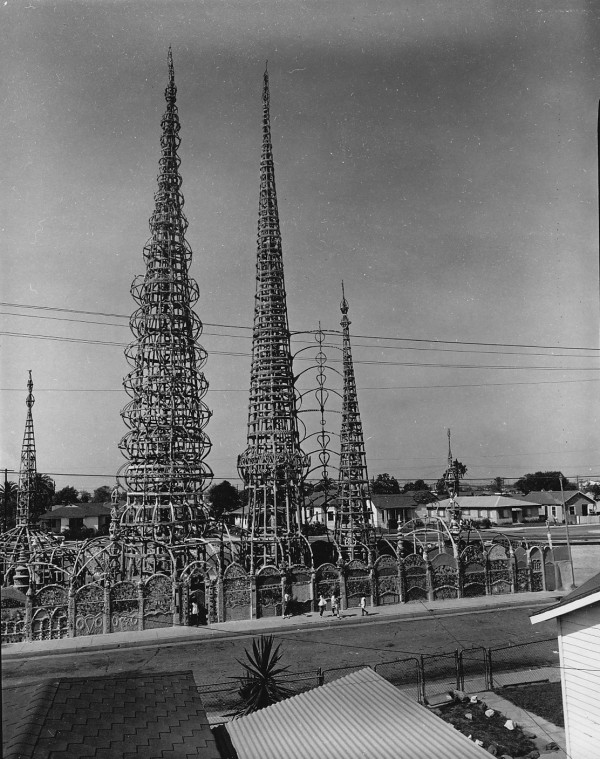 Surely, no one ever tried to dismantle this irreplaceable cultural resource!

In 1956, Los Angeles County Officials ordered the site to be razed. Activists, including SPACES Founder Seymour Rosen, formed the Committee for Simon Rodia's Towers in Watts and negotiated for an engineering test to prove the safety of the towers and save them from demolition. Following the successful test, some minor repairs were made and the towers were opened to the public in 1960 — where they still stand today, inspiring countless artists and giving the Watts community a landmark of their own.

Communities that embrace art environments can greatly benefit from these one-of-a-kind properties in many ways. Drawing visitors from all around the globe creates new opportunities for economic growth, and some communities are even structured around them.

One example of a town and an art environment developing concurrently is S.P. Dinsmoor's Garden of Eden in Lucas, Kansas.

“S.P. Dinsmoor moved to Lucas just one year after its founding and started building the Garden of Eden 16 years later, so Lucas as a community has grown up with art at its very core. With this long history of art as a part of everyday life, it set Lucas apart from other rural prairie towns from the get-go and established a long timeline of creativity. The building of Roy and Clara Miller's rock and mineral sculpture park in the 1950s, Florence Deeble's Rock Garden environment in the 1980s, the Grassroots Art Center (established in the 1990s), and the relocation of current practicing artists to this town of 400 is unlike most rural communities' stories. The Garden of Eden is at the core of the built-in acceptance of building things, making things, creating your own space with whatever skills you have, utilizing whatever materials you have, as an accepted method of telling your story.” — Erika Nelson, independent artist and educator 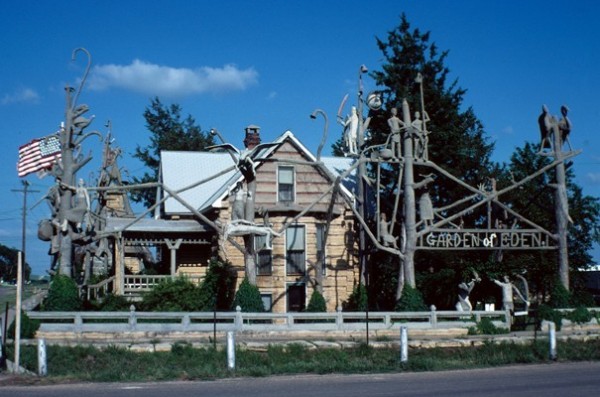 St. EOM’s Pasaquan in Buena Vista, Georgia, is another case of how the preservation of an art environment in situ can create opportunities for the community in which it exists. While St. EOM (Eddie Owens Martin) was alive, he welcomed visitors to his home to view his artwork and have their fortunes told. After his death in 1986, the site fell into disrepair and the subsequent local lore surrounding the environment was primarily negative. When Pasaquan became a preservation project of the Kohler Foundation, the conservators working on the site moved into the adjacent town of Buena Vista where they began forming relationships with community members and repairing the reputation of the site. Columbus State University, the steward of Pasaquan, has recorded the oral histories of Buena Vista residents, bussed in school children, engaged university students, and partnered with local restaurants and vendors. The site welcomes approximately 73 visitors from around the world every weekend (during its open months), many of whom stop in Buena Vista to eat or shop. The internationally recognized site is now celebrated locally as well and appears on the Visionary Odyssey, a “creative and artistic voyage through the heart of the Chattahoochee Valley,” — an important tourism opportunity for an area facing economic challenges.

Communities that embrace their environment builders while they are still living and working enjoy the additional benefit of creative partnership. Bishopville, South Carolina, the town adjacent to Pearl Fryar’s Topiary Garden, receives thousands of visitors from around the world annually because of Fryar’s environment — boosting the town’s economy. Recognizing Mr. Fryar’s work as an important cultural asset and an opportunity to revitalize their downtown, Bishopville leaders commissioned the artist to create and install his living work as a community centerpiece. 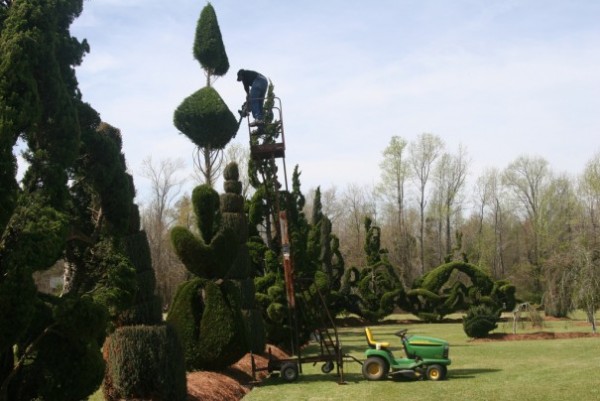 Pearl Fryar at work in his garden. Photo: Kelly Ludwig

The Vollis Simpson Whirligig Park in Wilson, NC even went so far as to include an Economic Development portion on their website!

Gerry Dalton, an Irish immigrant postal porter and factory worker, passed away in August 2019, after spending 30 years transforming his West London flat into Gerry’s Pompeii, a fantastical environment with intricate, miniature replicas of palaces and cathedrals, painted busts, and collages inside, with a massive collection of vibrant concrete statuary in the garden surrounded by a mosaicked mural that offers a blue burst of color in an otherwise monochrome neighborhood. 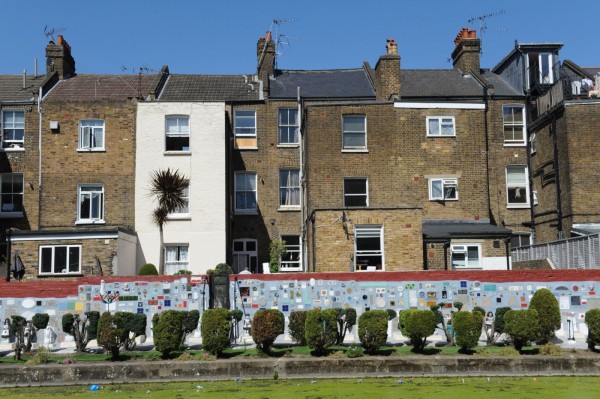 Gerry's Pompeii, as seen from outside. Photo: Jill Mead

Having no will, Dalton’s magnum opus was immediately in danger following his passing and neighbors quickly voiced their support, even gaining the attention and encouragement of museum/art professionals and celebrities. In 2020, a year later, site advocates are currently facing challenges as they fight to preserve the work. 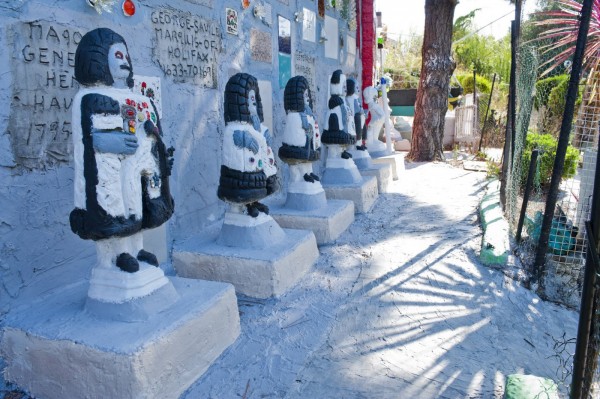 There are currently no sites similar to Gerry’s Pompeii in the UK. This site offers a unique opportunity to memorialize the artist, as well as offering the surrounding neighborhood a chance to elevate this site for economic, educational, and social gain. This is only possible with the blessing and support of the community, Dalton’s family, and the Housing Association. Many art advocates are trying to help save this site and have written letters of support, including Emily Smith, executive director of Philadelphia's Magic Gardens.

Gerry's Pompeii urgently needs your support as they are facing a September 7th deadline to save the flat from renovation!

Visit Save Gerry's Pompeii to find out more about how you can support this important cultural and artistic asset. 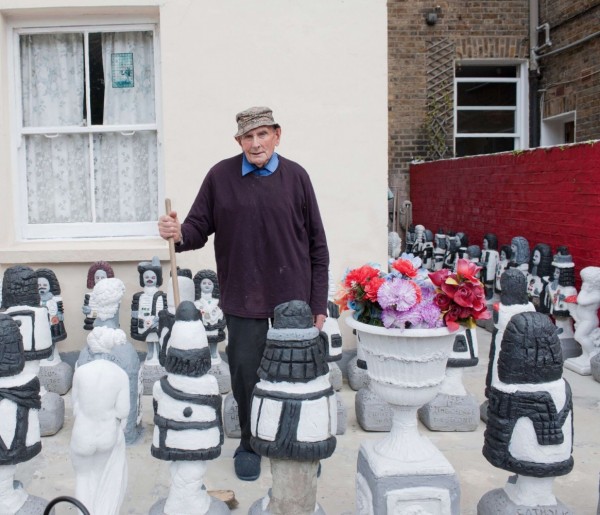 Gerry Dalton in his environment.