A Pilgrimage to the Shrine and Grottos of the Black Madonna 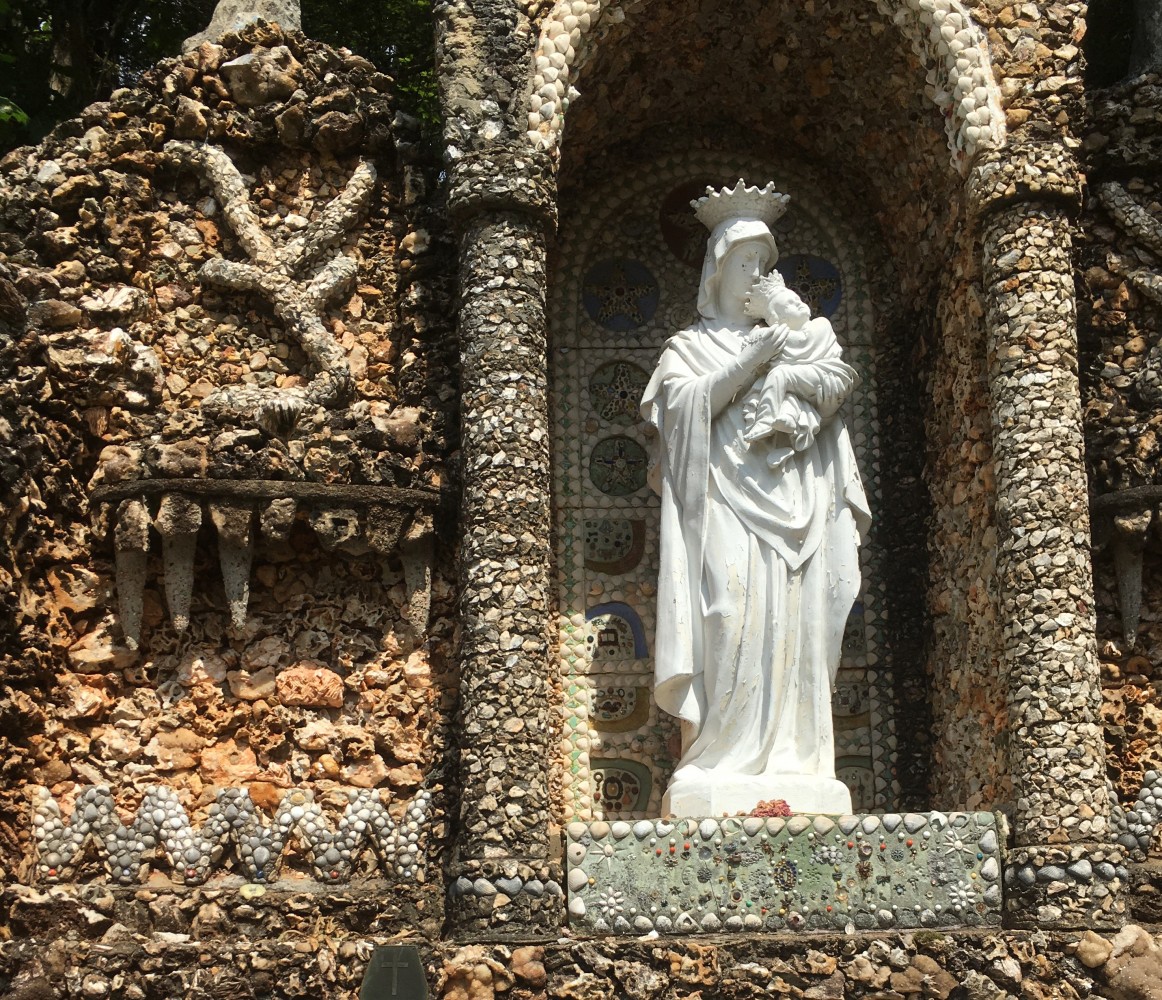 SPACES is happy to share this guest post from Gabrielle Christiansen on her recent visit to a grotto environment outside of St. Louis, Missouri. Christiansen is a Midwest-based art historian and museum worker who graduated from the Modern and Contemporary Art History Master's program at the School of the Art Institute of Chicago in 2020. 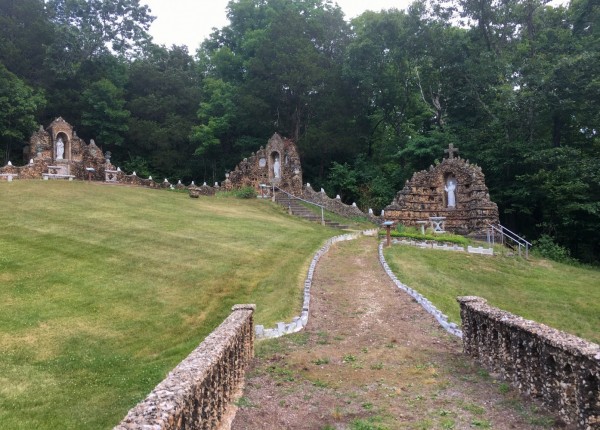 The Shrine and Grottos of the Black Madonna sit on a small plot of land on the outskirts of the outskirts of southwestern St. Louis, a region at the northern lip of the Ozarks where the plainland of central Missouri has just begun to buckle, swell, and furrow into the verdant highlands and jagged limestone bluffs of the state’s south. I visited the grottos early in the pandemic, remembering religious pilgrimages made in my youth and looking outdoors to replace the ill-advised ritual of art museum visits. The site––cleared of its thick native oak and hickory in the late 1930s by a lone Franciscan Brother, Bronislaus Luszcz––accommodates a chapel (which houses the eponymous madonna paintings) and a series of hand-built grottos along the property’s perimeter. Each of the seven grottos, connected by an intermittently paved trail, is dedicated to a different saint or biblical scene: St. Francis, St. Joseph, Our Lady of Perpetual Help, Our Lady of Sorrows, Gethsemane, the Assumption, and the Nativity. Their craggy walls are composed of materials both native to the region and distant in origin––cement-bound tiff rock, transported to the site in wheelbarrows from the nearby mining town of Potosi, is periodically encrusted by sea shells, costume jewelry, and ceramic objects brought to the site by visitors and sent by foreign missions. 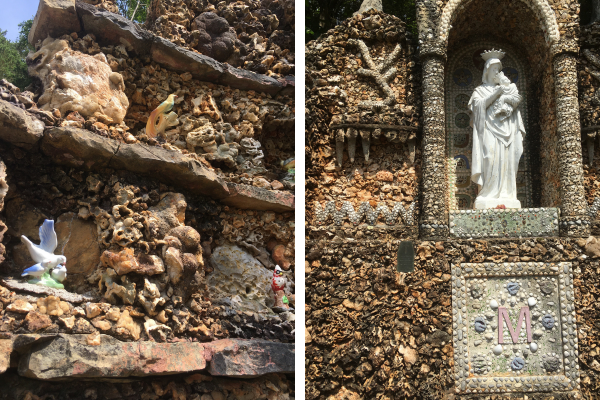 Similar in his resourcefulness to other rural environment-builders, Bronislaus also used salvaged material from his daily life as grotto ornamentation––columns of the Grotto of Perpetual Health were built from coffee cans, flower pots were constructed from gelatin molds, parts of an old monastery chandelier were painted and reused as flower stems, and expired lightbulbs filled with concrete were included as additional decoration. Though from a distance the rocky masses might pass as natural formations, the recycled, mass-produced, and gifted objects embedded within grotto walls provide a subtle, interwoven record of Bronislaus’ life at the infirmary, as well as a record of the many pilgrimages made to the site as the environment was built up piece by piece. As I felt my way along the enveloping walls of upturned earth and reclaimed detritus, I was reminded of poet John Gould Fletcher’s summation of the Ozarks: “It is a land of waste, where nature sprawls.” 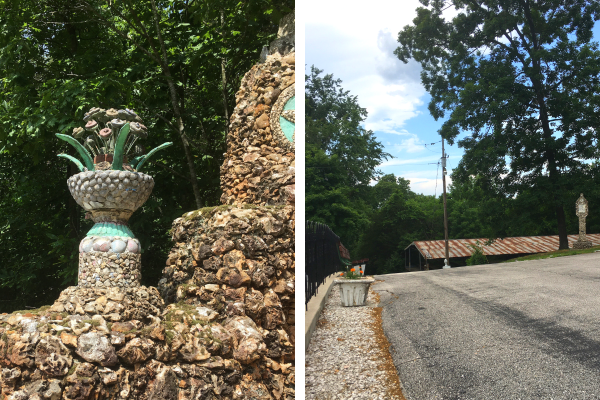 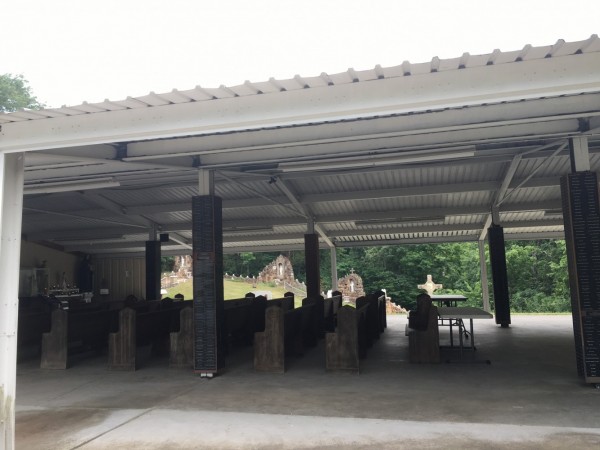 The open-air chapel which sits at the center of the grotto trail emphatically fits its rural-Missouri context. Below a long sheet metal roof, a Gatorade cooler with dispensable holy water sits near the altar, while the absence of chapel walls leaves the nearby grottos and rolling green landscape in view (and permits birds to periodically dart in and out of the structure and perch atop the paintings on display). A grounds supervisor stationed in a trailer-sized building near the chapel provided me with an account of the site’s history. Brother Bronislaus was one of several Francisican missionaries who was asked to emigrate from Poland in order to establish an infirmary in the Ozark foothills outside of St. Louis. In his home country, Bronislaus had observed many pilgrims traveling to visit the famous shrine of the Jasna Góra Monastery in Częstochowa, which houses a Black Madonna painting said to have been created by Saint Luke. The pictorial category of the Black Madonna generally refers to Byzantine-style depictions of Mary and Jesus rendered in dark skin tones––interpretations of these paintings, which are found in various forms across Europe, have ranged. Some art historians have understood the icons’ coloring as unintentional, darkened due to age and incense pollution, while others have interpreted the works as accurate and intentional depictions of the Middle Eastern holy family, countering later whitewashed icons. 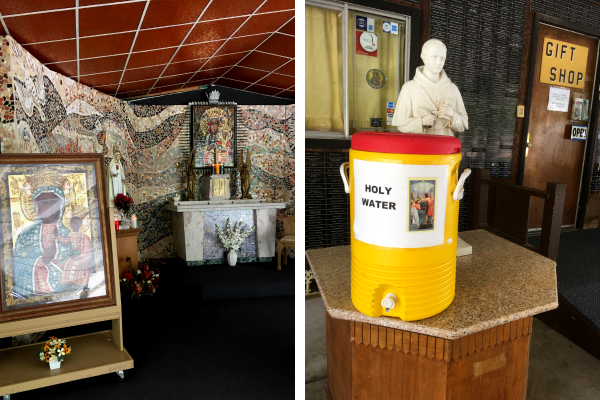 Bronislaus decided to share the image of the purportedly miraculous Częstochowa portrait upon moving to Missouri, hanging a replica of the painting above the altar of a small wooden chapel he built near the Franciscan infirmary in 1937. Over the following 23 years, he constructed his grottos in the surrounding area, unaided by assistants or power tools. When Bronislaus’ original wooden chapel burned down in 1958, the sheet metal structure currently found on site was built in its place, and the Black Madonna painting Bronislaus had initially brought from Poland was replaced by a new replica, which was shipped to the United States after being touched to the Jasna Góra original. In the following years, another replica of the icon was donated from the former Church of Our Lady of Częstochowa in St. Louis, and a third Black Madonna was composed behind the altar by artist Frederick Henze.

In the decades following Bronislaus’ death in 1960 (due to a heat stroke he incurred while working outside on the Grotto of Our Lady of Fatima), the Franciscan brotherhood has maintained operations nearby, and Bronislaus’ built environment continues to serve as a place of pilgrimage and respite for people in the region. The walls are an enduring demonstration of one man’s devotional labor, a series of towering sculptural works composed of the gifted, excavated, and gleaned materials which surrounded the artist during his lifetime. 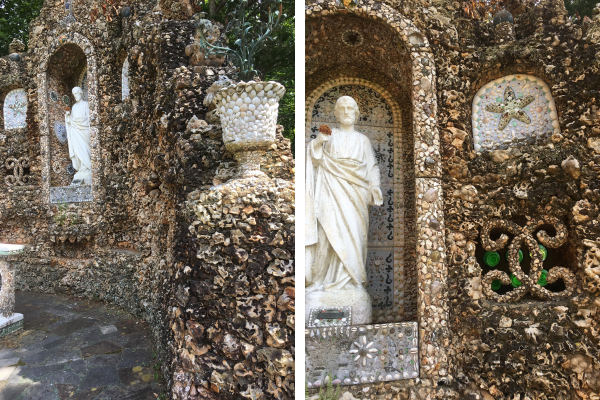 All photos courtesy of Gabrielle Christiansen