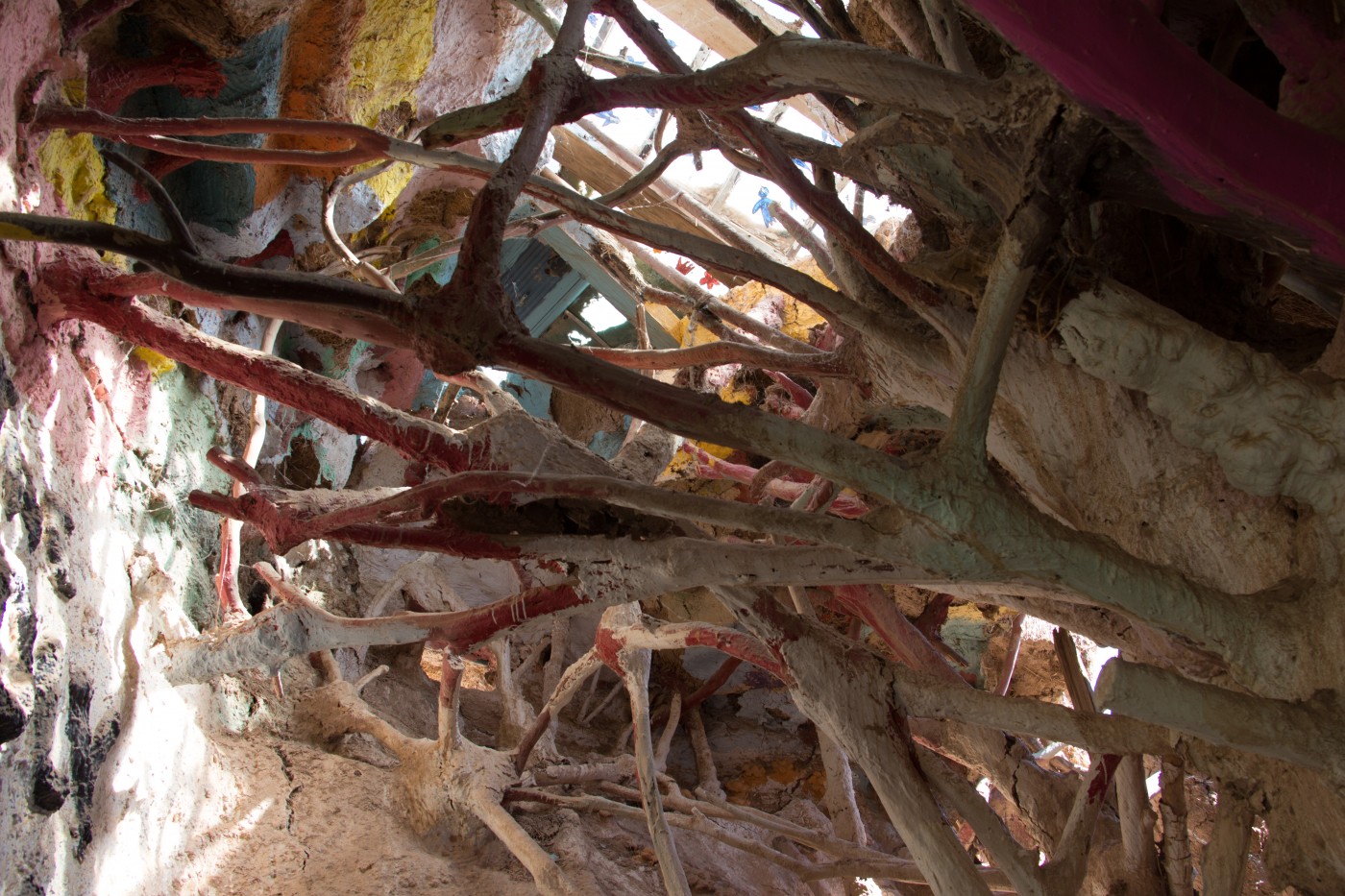 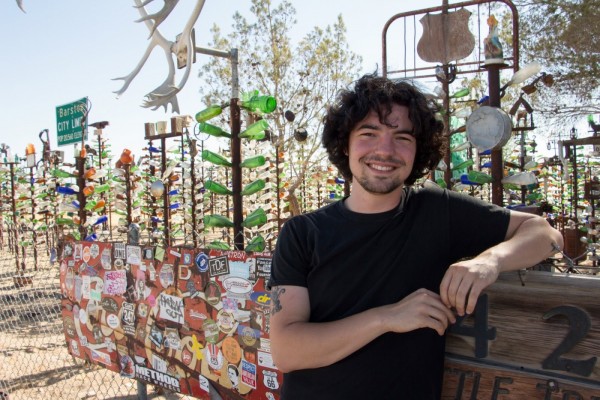 Harry Warnaar is an interdisciplinary artist from Chicago, Illinois. Currently enrolled at the School of the Art Institute of Chicago, his practice predominantly takes the form of painting, printmaking, and concrete sculpture, with additional experience in video and new-media performance. Beyond the studio, Harry’s interests lie in critical theory surrounding the relationship between artistic expression and class, as well as architecture for affordable housing.

After a hellish fifteen hours of airline misadventure, I arrived in San Francisco sometime around midnight. With my “cushion” day long gone, I knew I was going to have to hit the ground running bright and early in the morning. This was the beginning of my two-week adventure hunting down vernacular art environments of California. My interest in these sites was to explore how the work of these seemingly isolated artists speaks to the greater world around them and how that legacy lives on in such a rapidly changing landscape. This trip was all made possible by the Roads Scholarship for Research and Travel, a travel grant offered through the “Better Homes and Gardens” class offered by Lisa Stone (Curator at the Roger Brown Study Collection) at the School of the Art Institute of Chicago, with the mission of sending people out on the road to see art environments in person. Day one in the Bay Area took me to Cayuga Park and the Wave Organ.

In the southern half of San Francisco city proper lies what has locally become known as “Cayuga Village,” an enclave of native San Franciscans reminiscent of the city’s financially and culturally diverse history. With the Bay Area’s tech boom, neighborhoods like this are few and far between. The grounds were lush with vegetation and peppered with brightly painted, carved wooden sculptures. All of this is the handiwork of the late Demetrio Braceros, an immigrant from the Philippines tasked with reviving the once abysmal plot of municipal land. It warmed my heart to see how much the community, and even the city, came to revere his work. This park stuck out as a model for how vernacular art and subsequent development could marry. 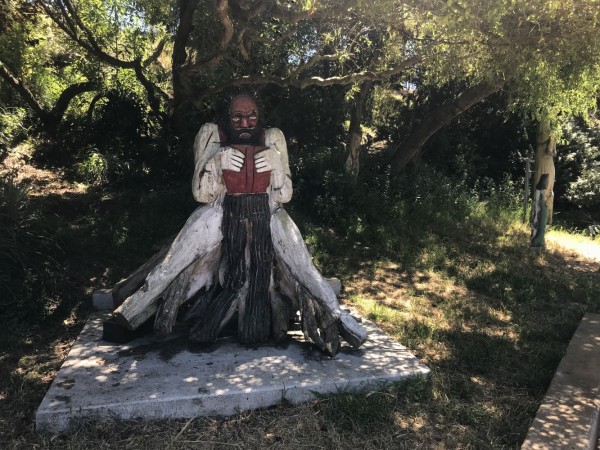 After grabbing some iced coffee, we made our way to the Yacht Club, where the Wave Organ resides at the end of a land spit. While sitting among the mix-and-matched masonry, we enjoyed the beautiful, uncharacteristically clear day out on the Bay. Before I knew it, I was hypnotized by the gentle melody of the waves, echoing through the concrete pipes. I saw a man sleeping on the stones with a fishing pole stuck in one of the freestanding pipes, so I wasn’t alone (his wife was looking after the pole). I could sit here for hours, which seemed to be what they were going for when they built the Organ.

The next morning took us further across town and into the East Bay. Our first stop was Mark Olivier’s Yard Art Installations in Berkeley. Navigating the winding streets of Berkley was tough at first, but it became quite apparent which house belongs to Olivier. The first thing I saw was the giant blue poodle. Life-sized/larger-than-life sculptures of dogs, samurai, masks, bugs, and a giant handbag, all constructed out of various found plastic trash are installed throughout the yard.

Not too far away along the shore in Albany, we hiked out to The Bulb, a nature park at the end of a narrow peninsula. The park’s distance from the shore seemed to make it a great location for large-scale, impromptu art projects away from the eye of the inland public. This site is presently listed as “threatened” on SPACES, so I didn’t know what to expect. I was pleasantly surprised to see the artwork, at the moment, is thriving. On the far edge of the park, facing out to the open ocean, you can find a variety of pieces from bent rebar and driftwood sculptures to manipulated landscapes and graffiti on rocks. 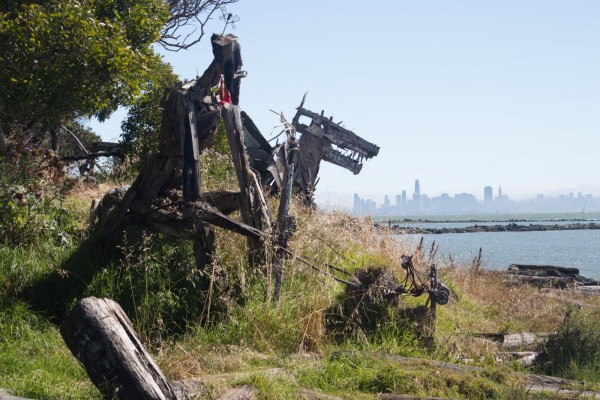 Day three took us all the way across the Bay into Lagunitas to see David Lee Hoffman’s The Last Resort. Having heard about the property’s threatened status, I was glad to see it is still extant. Despite being unable to get much of a look inside, it was fascinating enough to see how far the structures climbed up the hillside. On our way back we stopped for lunch at Joe’s Taco Lounge in Mill Valley. The torta was excellent!

Saturday morning, we packed up and began our journey south! My original plan involved making our way down Pacific Coast Highway 1, but due to traffic and a desire to speed things along, we made our way down 101, passing the famed Madonna Inn, and spending the night in Lompoc. From there, our next stop was Simi Valley—the beginning of our Southern California adventure.

Arriving in Simi Valley, we found Grandma Prisbrey’s Bottle Village. Despite visiting during open hours, the gate was locked and no one was around.  While it was great to see the Bottle Village, I was reminded how many vernacular art spaces, even ones with landmark status, still struggle to get funding for basic maintenance and operational costs. Nonetheless, Grandma Prisbrey’s handiwork was exciting to finally see in person! From there it was a short drive to Los Angeles, where we ended our day.

It was my first time in LA, our three-day visit was a great time to reflect on the trip so far, enjoy the hustle of the big city, and mentally prepare for our mildly daunting trip into the desert. I was surprised to see how much vernacular art was able to find its place in such a booming city. While in LA, we stopped by Randlett King Lawrence’s Phantasma Gloria, an impressive mural/bottle façade. Stretching up the side of a retaining wall in Echo Park, the multi-colored glass shimmered in the sun. While in the northern half of the city, we took a trip into the Hollywood Hills to see the Garden of Oz, an intensely mosaicked garden tucked away into the side of the hill. The gate was locked, only affording us a glimpse—enough to appreciate its mysterious beauty. And finally, heading south, we arrived at the Watts Towers. Fortunately for the towers (but unfortunately for us), restoration was in full swing. Three-quarters of the height of the spires was surrounded with scaffolding and protective covering. This did not stop me from peeking through the gaps in the fence to get a look at Sabato Rodia’s masterful tilework and insane hand-molded concrete structures. This situation gave me an excuse to make it back out to LA, so I wasn’t too bummed. 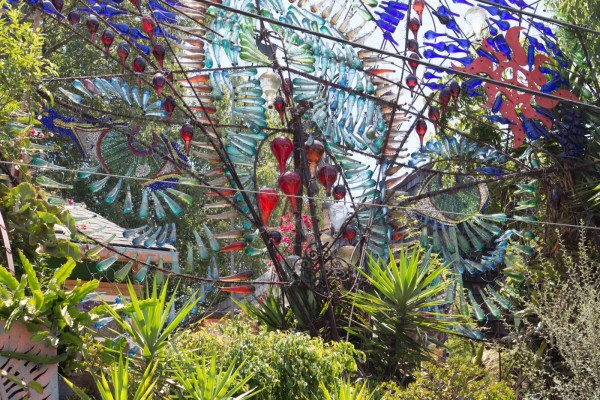 The time came to set off into the desert. The drive seemed alright at first until we hit Grapefruit Boulevard and still had an hour to go. At this point we were circling the notorious Salton Sea, an irrigation mishap, turned 1950s desert oasis, turned ecological disaster. I was stunned by how beautiful the sea was despite its bad reputation. Eventually we made it out to Niland to see Leonard Knight’s Salvation Mountain. Even in the 104-degree heat, people were still making it to the site to get their pictures taken while climbing up the facade. On our way back we stopped by Bombay Beach, one of the original resort developments and the site of more recent artistic intervention in the Salton Sea area in the form of the Bombay Beach Biennale. 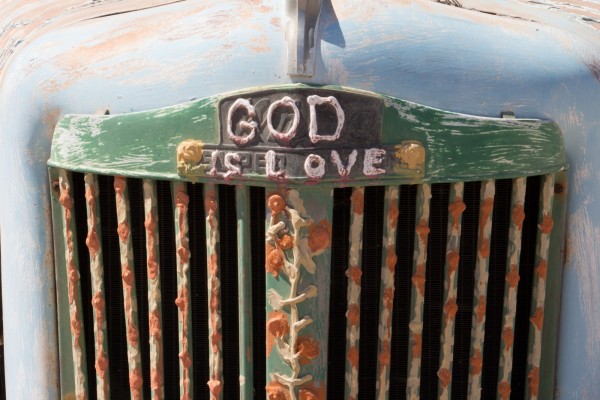 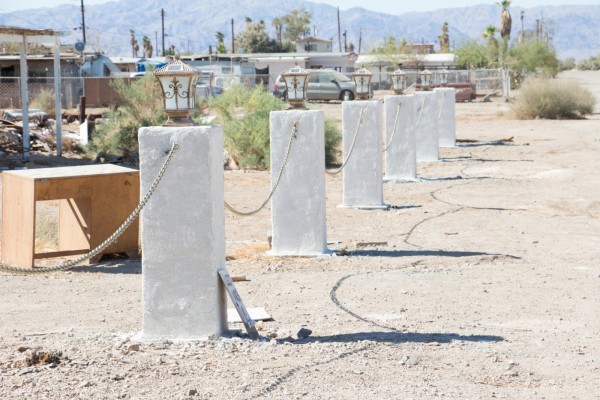 From Bombay Beach, we headed up to Joshua Tree. At this point I had really fallen in love with the intensity of the desert, and Joshua Tree was the epitome. We stayed in an original homesteader cabin in unincorporated land—a mile and a half from The Noah Purifoy Desert Art Museum of Assemblage Art. Arriving in mid-July meant braving some intense heat, and we were the only ones there. However, seeing Purifoy’s work in this beautiful but brutal environment seemed right. I had high hopes for the Desert Art Museum, and my expectations were far surpassed. Never have I seen assemblage sculpture so captivating and poignant. 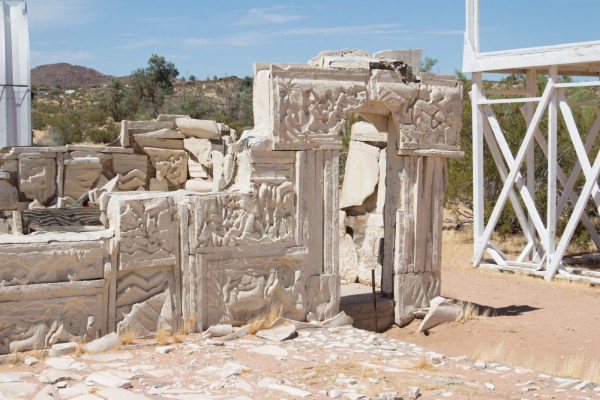 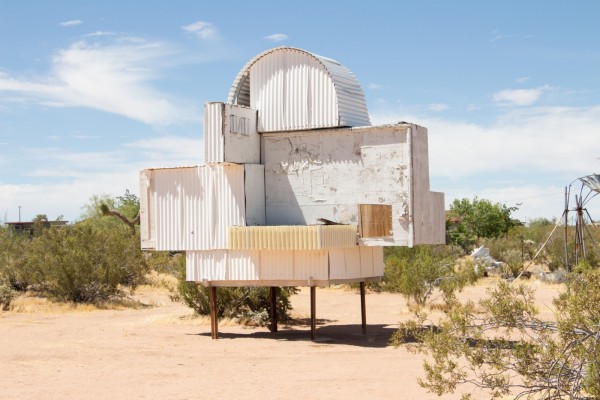 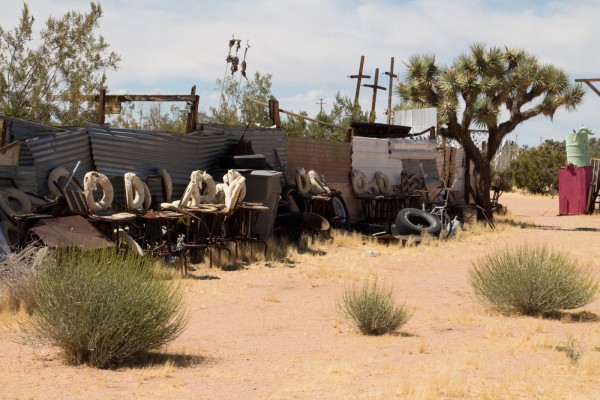 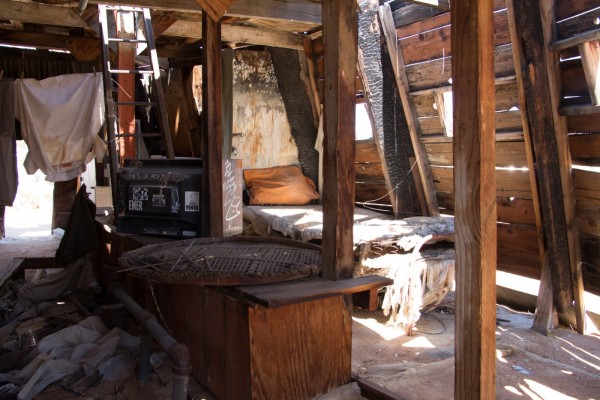 Our last official site was on our way back north to the Bay. We stopped alongside the highway right outside Victorville to visit Elmer Long’s Bottle Tree Ranch. Posted on the gate was a small sign paying homage to the artist, who had recently passed away. The ranch offered a late stage energy boost to take on the drive back north. So with high spirits and plenty of fresh roadside produce, we made it back in time to unwind and reflect on the trip before flying back to Chicago.

Seeing so many sites in such a short amount of time was incredible. The trip felt as much like a vacation as it felt like being on the run. What I sacrificed in deeper study of one individual place, I gained in a sweeping survey of multiple places all undergoing similar changes and attempting to find ways to cope with the passage of time. Of course the often unsure futures of these sites meant the pace of the trip was important, especially for the threatened environments. We had to take in as much as possible and keep moving. This experience seemed to be consistent with the fugitive nature of vernacular art. For these artists, making their work is a humble yet inspiring claim to stake their legacy as well as the legacy of other extraordinary everyday people. 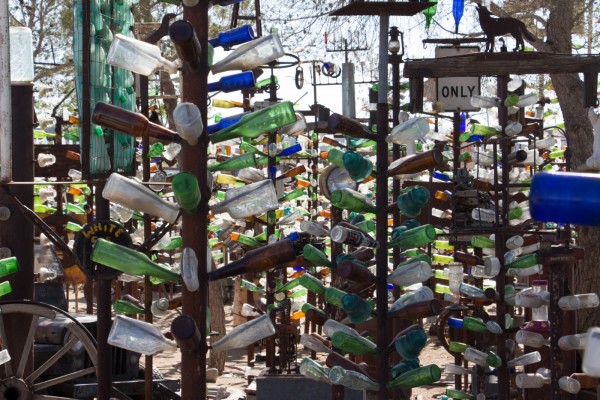