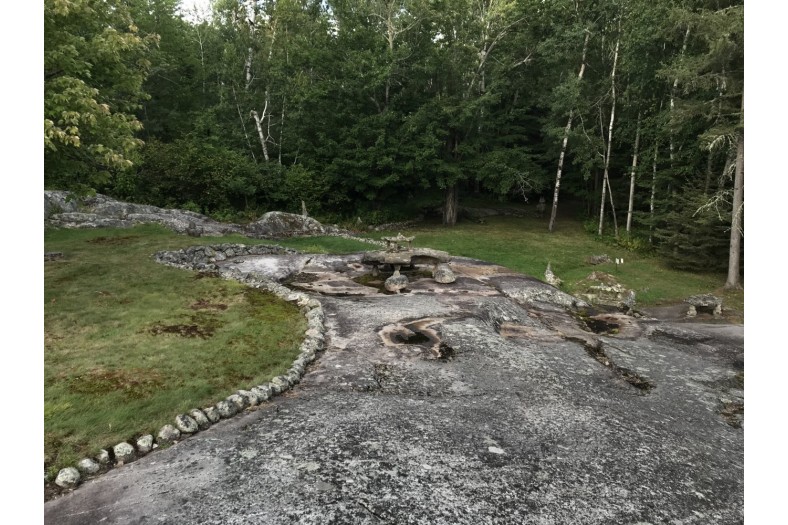 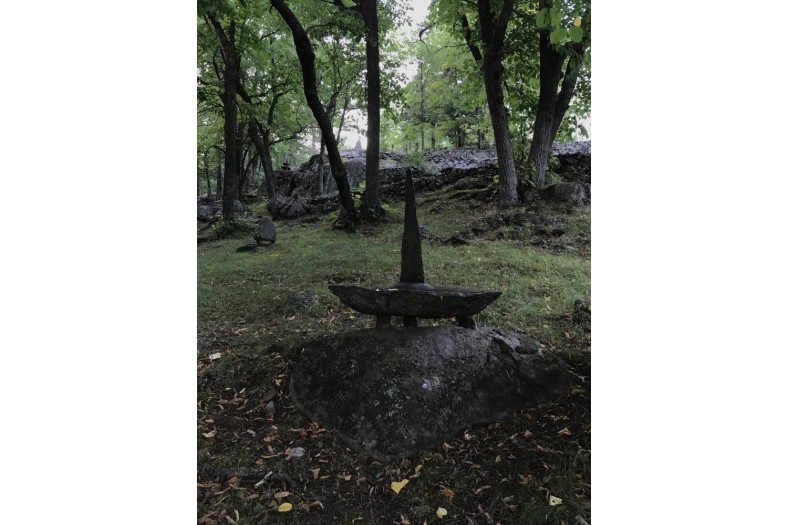 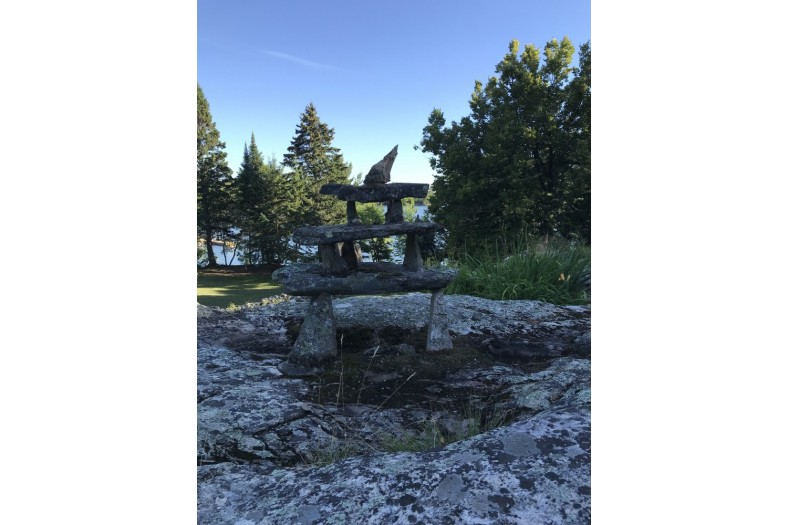 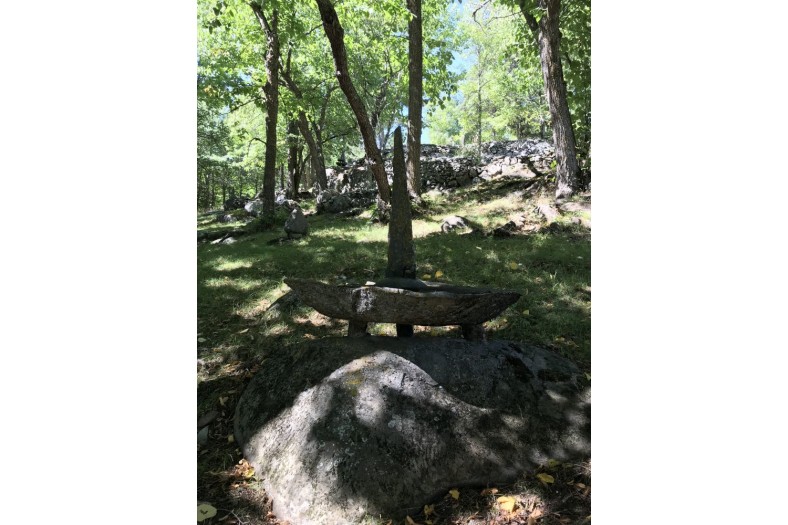 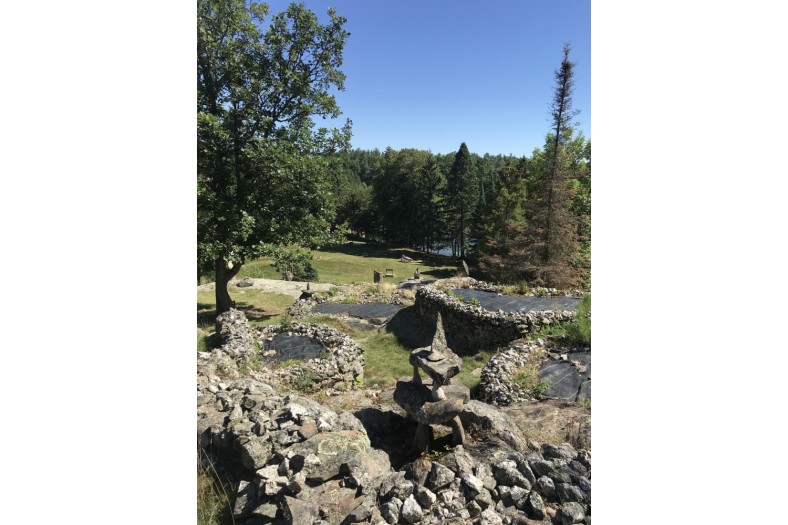 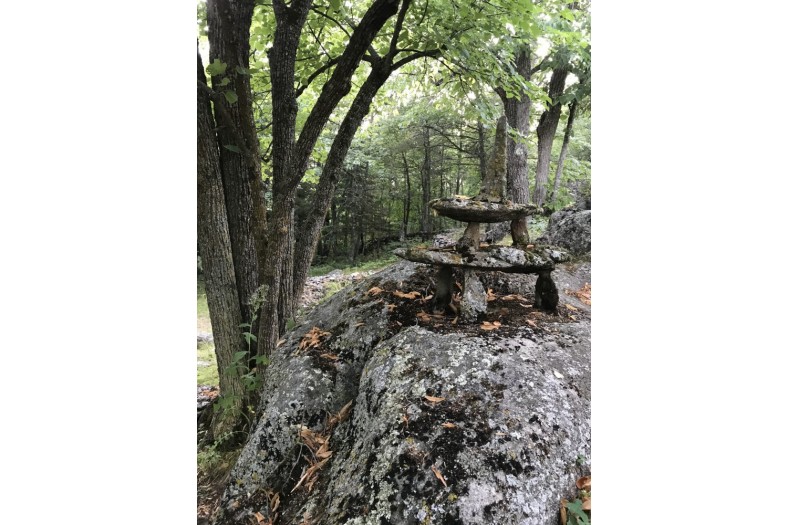 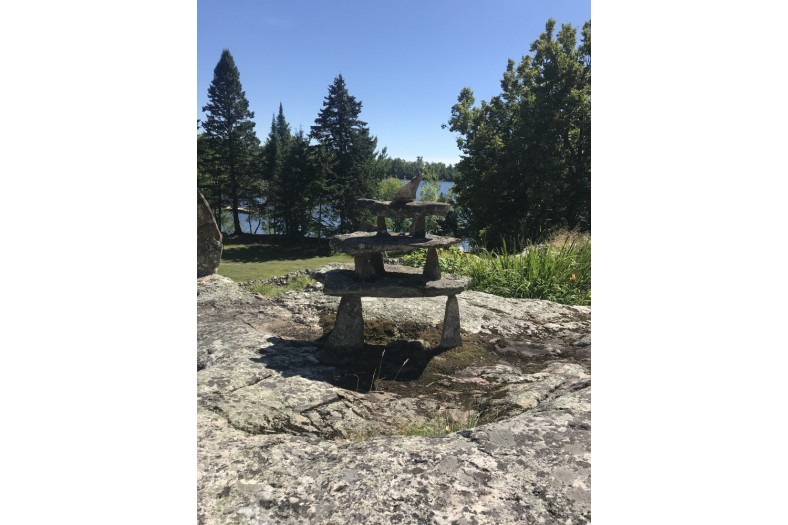 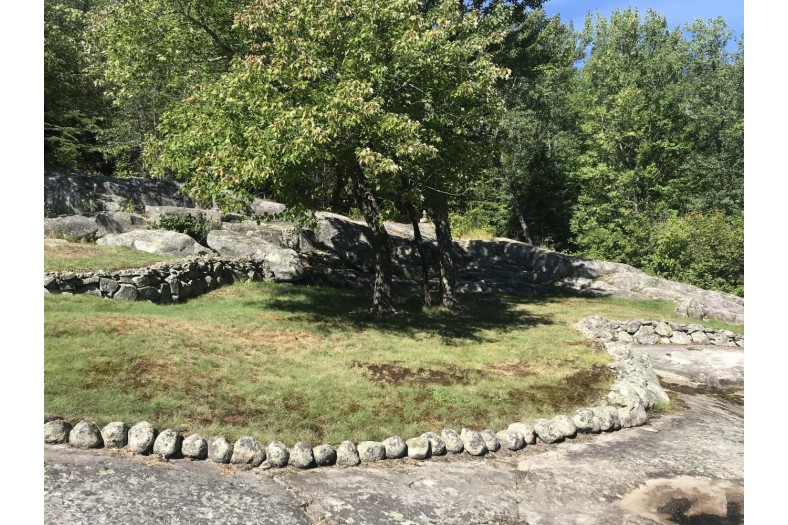 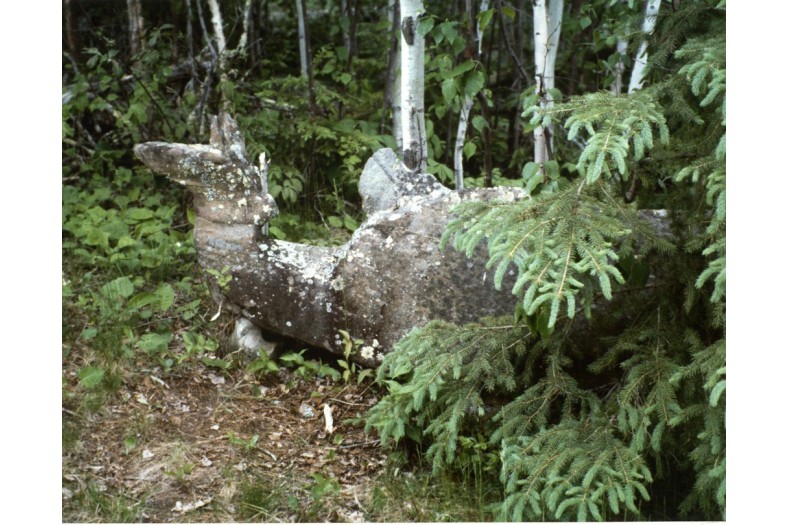 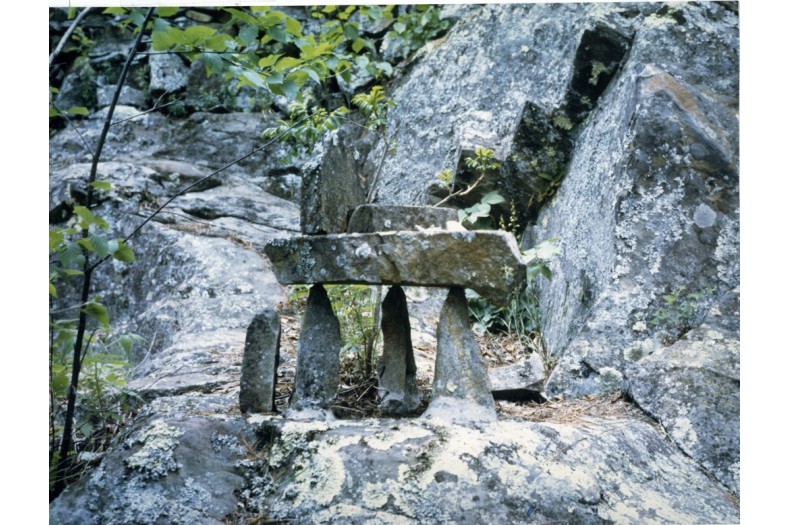 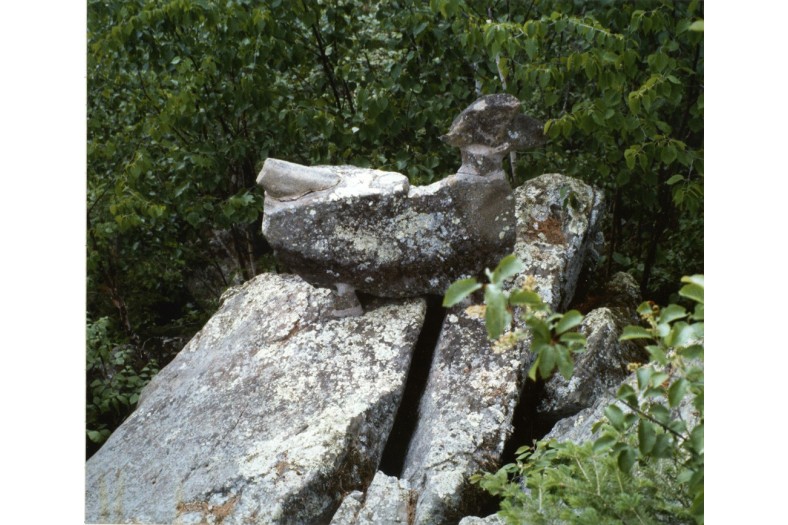 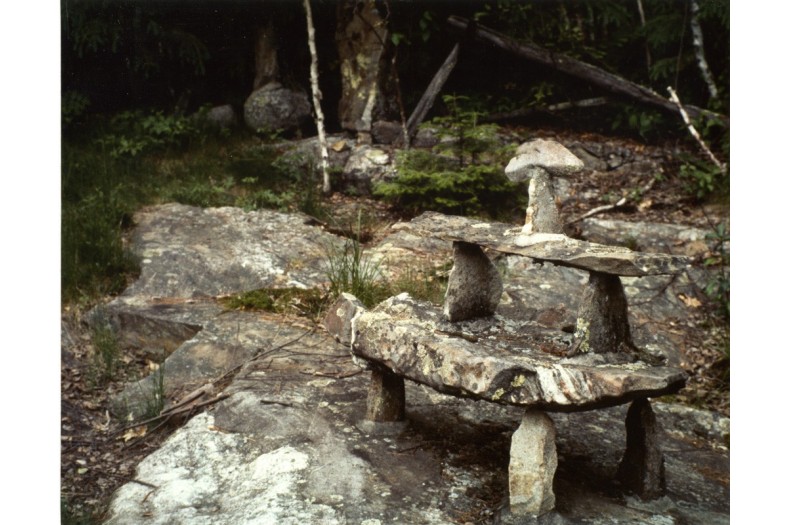 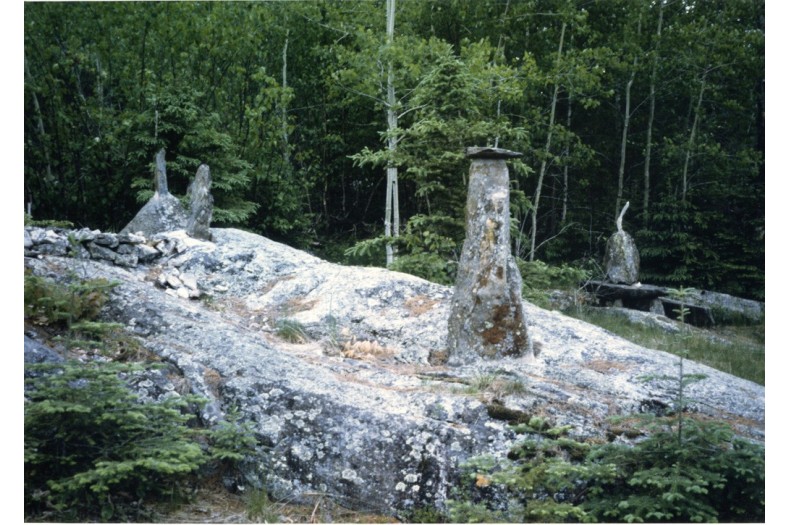 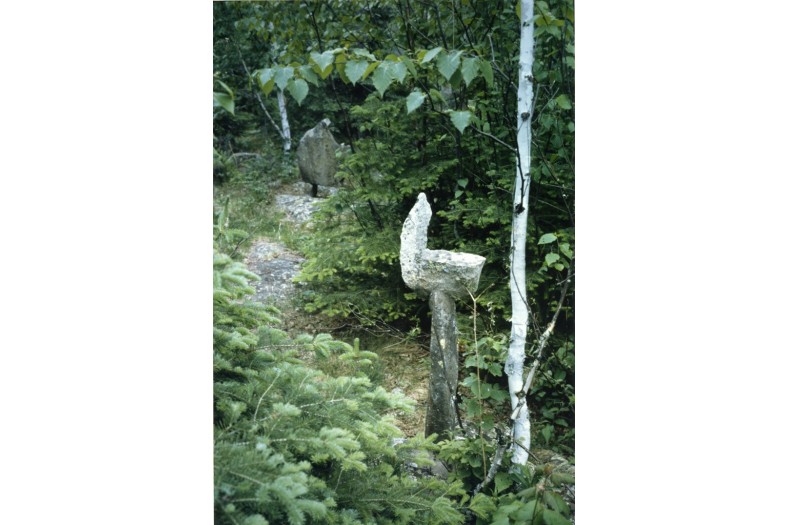 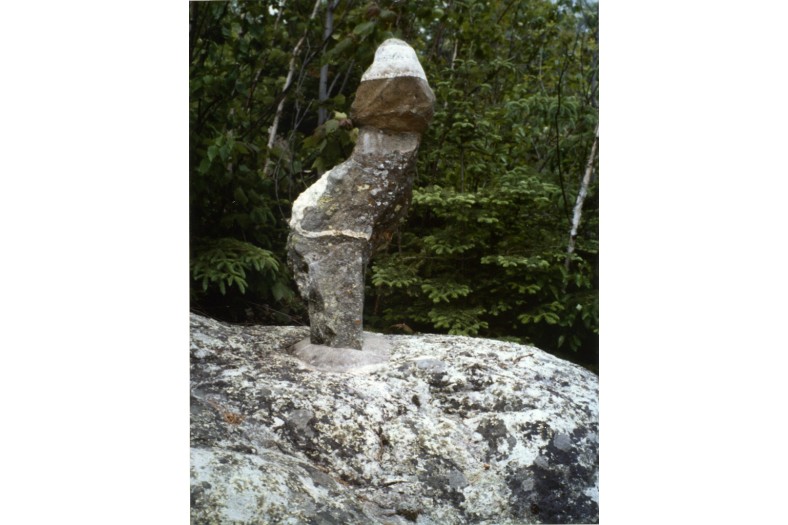 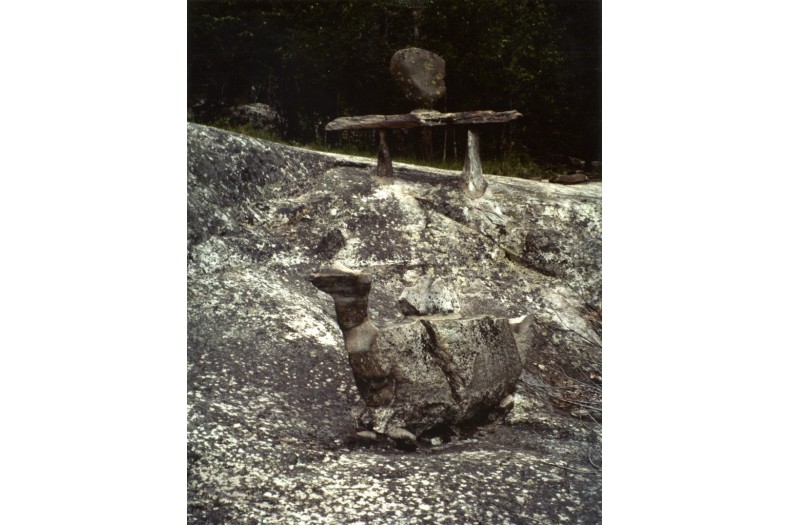 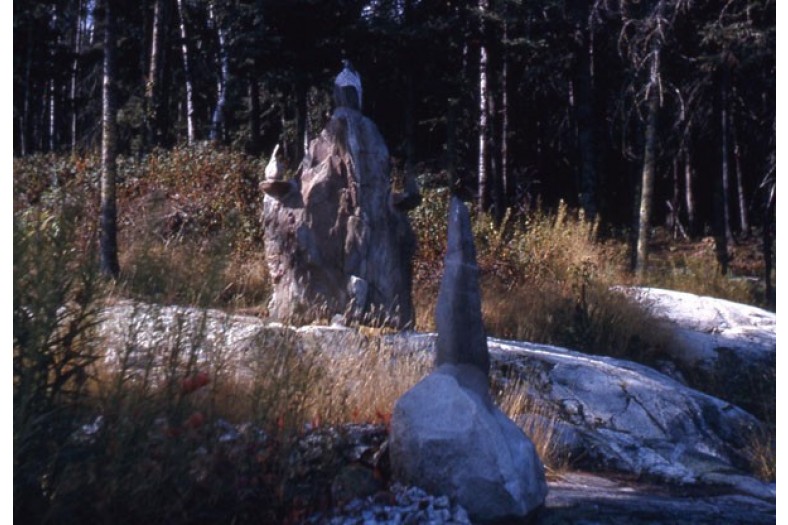 Used with permission of the photographer, Lisa Stone﻿

Built between 1944 and 1965 by retired Chicago contractor Jack Ellsworth, Ellsworth Rock Gardens is a composite of terraced garden beds and rustic circulation features, punctuated by some 200 delicately-balanced native rock sculptures. Located at the northern edge of Lake Kabetogama, the site is now part of Voyageurs National Park, a 219,000 acre tract of forest, lakes, and waterways along Minnesota’s boundary with Canada. The garden’s setting is arresting: Ellsworth built many of its features atop the surface of a large gray granite outcropping, rising from a grassy meadow below. Garden elements extend seamlessly into the bordering forest, and the entire landscape is offset by expanses of water and sky. During its heyday (from the late 1940s to the mid ‘60s), the gardens bloomed with a profusion of perennial and annual flowers, drawing thousands of visitors across the lake to experience “the showplace of Lake Kabetogama.”

Despite considerable research, little is known about Jack Ellsworth other than the address where he and his wife Elsie lived in Chicago, his occupation there, and what occupied him during twenty-one short summer seasons at the couple’s vacation property. Before embarking on his garden project Ellsworth built a cabin, outhouses, and shed, ferrying all building materials by barge to their peninsula property. The structures were lovely examples of rustic design, with subtle Craftsman style features. He then created two modest garden beds between the cabin and the granite outcrop. Perhaps something about this initial experience--working with rocks and soil to create garden plots, or the imposing austerity of the granite expanse--presenting a kind of giant tabula rasa, launched him into his ambitious, two-decade project.

There is no evidence that Ellsworth designed the entire landscape composition in advance. Rather, it appears that he worked intuitively, composing the garden as he went along, guided by the topography of the granite outcrop. He first created a series of meandering, terraced garden beds, meticulously constructed of dry-stacked granite, filled with soil brought in by wheelbarrow. Ellsworth topped the rims of the terrace beds with a layer of sparkling white quartzite “frosting,” effectively accentuating their sinuous shapes, and creating a rhythmic, visual path from bed to bed. The beds were planted with a profusion of lilies—over 13,000 in four varieties--as well as other plant and flower species, introducing broad splashes of bright color into the backdrop of trees, land, water, and sky. Word of the garden spread among vacationers, probably prompting Ellsworth to add several so-called “signature stones” on which he stenciled: Ellsworth Rock Gardens, These Gardens designed and constructed by Ellsworth, and other text and directional symbols.

With an innate sense for spatial organization Ellsworth incorporated a series of pathways and stone stairways to direct and ease movement through the challenging terrain of the outcrop, and through the garden spaces. He created pools by formalizing existing depressions in the granite, and built stone bridges to traverse natural waterways. Many of the paths and stairways are flanked by gateways of large, upright stones. These subtle circulation features follow natural shapes in the granite, connecting terraced garden beds and echoing their curved designs.

Beginning in the early 1960s Ellsworth began creating stone sculptures––eventually numbering about 200––planting them at pivotal points throughout the garden.  One of his most intriguing, recurrent forms was a “stacked table” arrangement, which followed a simple design formula: three slender upright stone legs support a broad, horizontal table top; in variations, one or more additional levels of legs and table tops were added, diminishing in size as they rise. In many one-of-a-kind works, Ellsworth took amorphic rock shapes, barely suggestive of objects or animals––a raven, or a Saturn globe, for instance––and balanced them on larger stone masses. Or, conversely, he took larger boulders suggestive of figures or animals—a goddess, a deer—and added smaller rock shapes to complete the image. Ellsworth diverged into a more literal, rustic northwoods vocabulary with three commanding elements: two wood teepees (one enclosed with painted canvas), and a large upright stone with an applied, painted arrowhead shape, all installed at the top of the outcrop.

Jack Ellsworth claimed to have spent over 14,000 hours working on the garden, and by virtue of this calculation he was clearly aware of the scope of his labor alone.  In a rare recorded quote he discussed the project with understated humility:   “…we love this country and wish to spend more time here, but I just had to have something to keep me busy.”  In 1966 Ellsworth became ill,and that year the Ellsworths stopped spending summers at their Lake Kabetogama property. Jack Ellsworth died in 1974.  The National Park Service (NPS) created Voyageurs National Park (VNP) in 1975, and acquired the Ellsworth property in 1978. Lacking Ellsworth’s Herculean maintenance efforts, the gardens became increasingly overgrown, and sculptural elements became more prominent as the gardens beds ceased to bloom. The site, however, continued to draw visitors, as its features took on the compelling aspect of a respectable ruin.

In the 1990s efforts to preserve the site according to contemporary historic preservation theory and practice began. By 1996, extensive research and organization of vintage documentation led to the creation of a site survey, inventory, and a preservation plan. Working from these, the VNP cultural Resource Specialist organized work sessions and in 2001 volunteers gathered to assist in clean up and conservation. Annual work sessions and site preservation are ongoing. 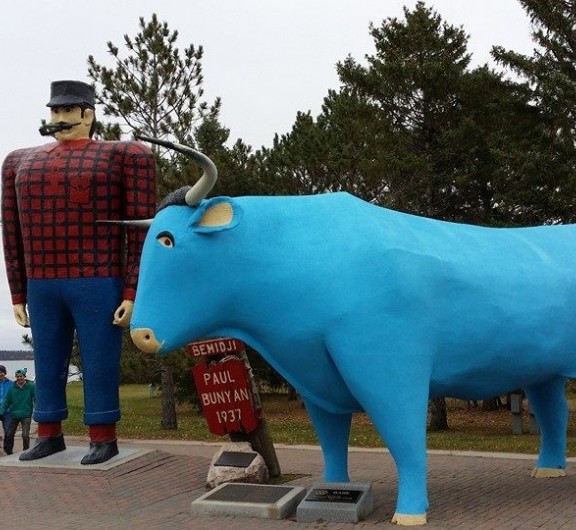 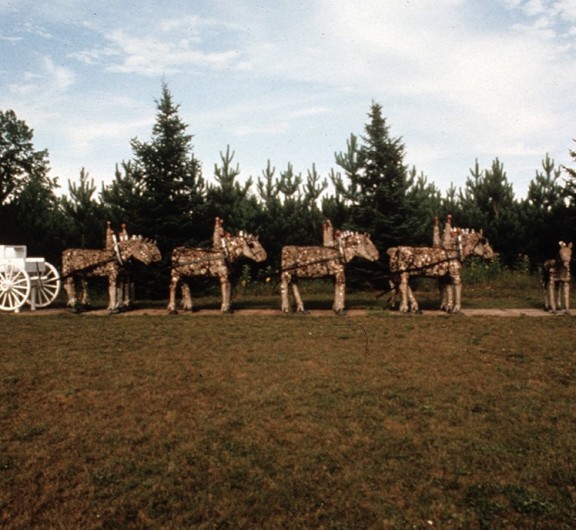