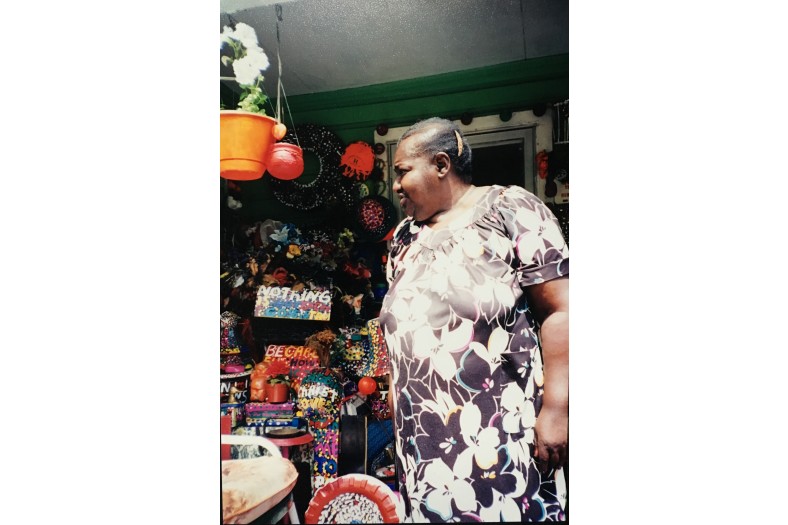 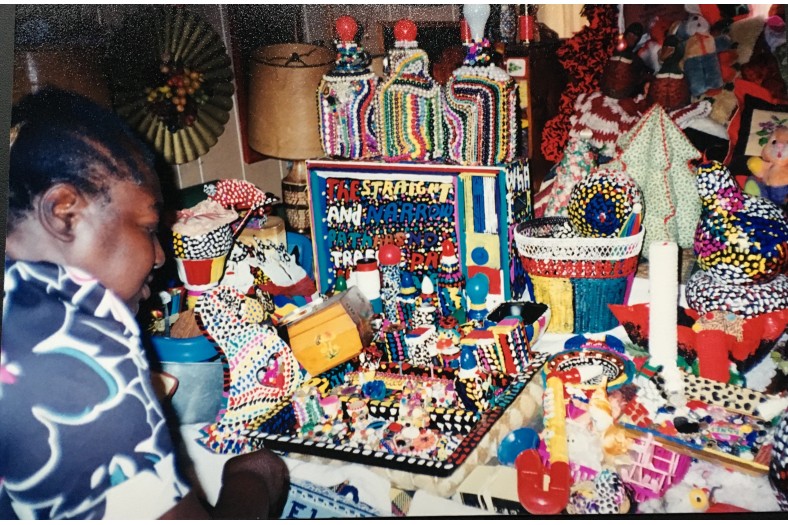 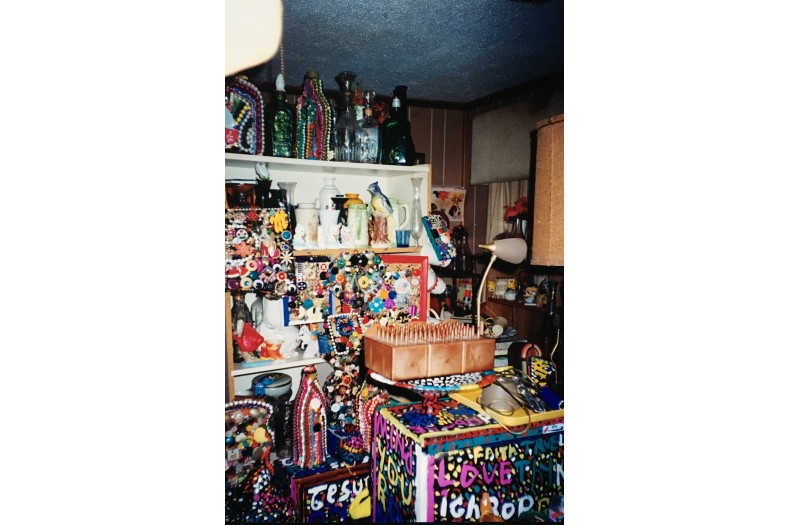 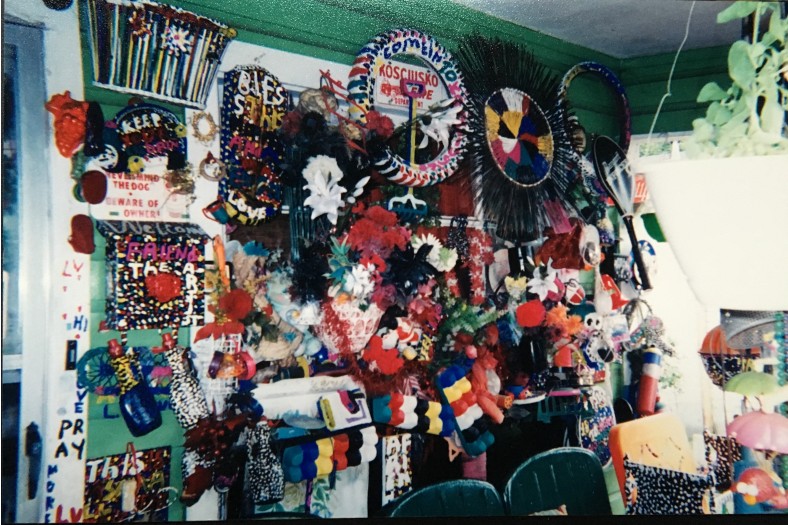 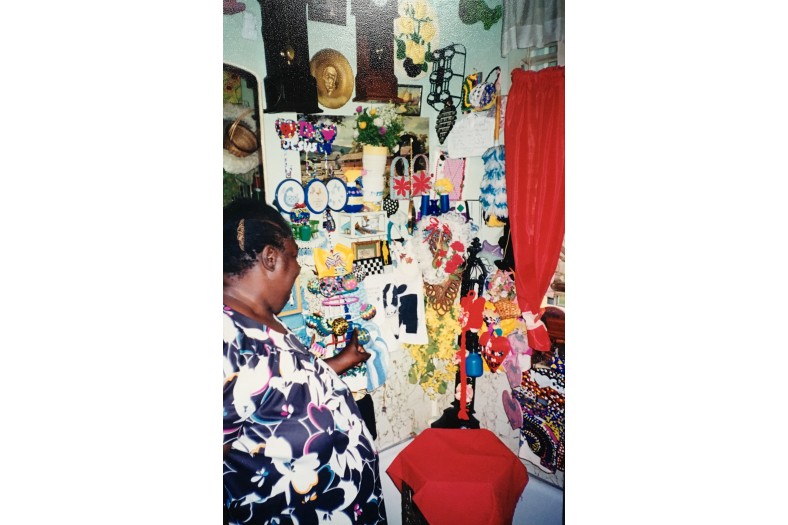 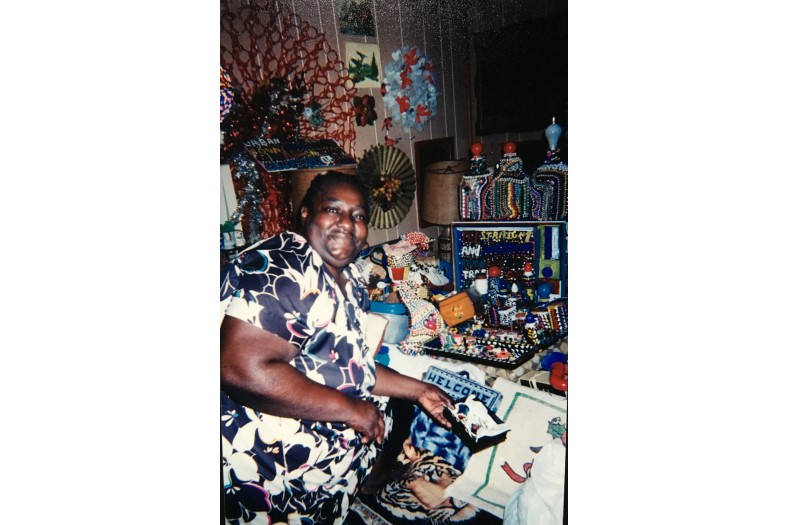 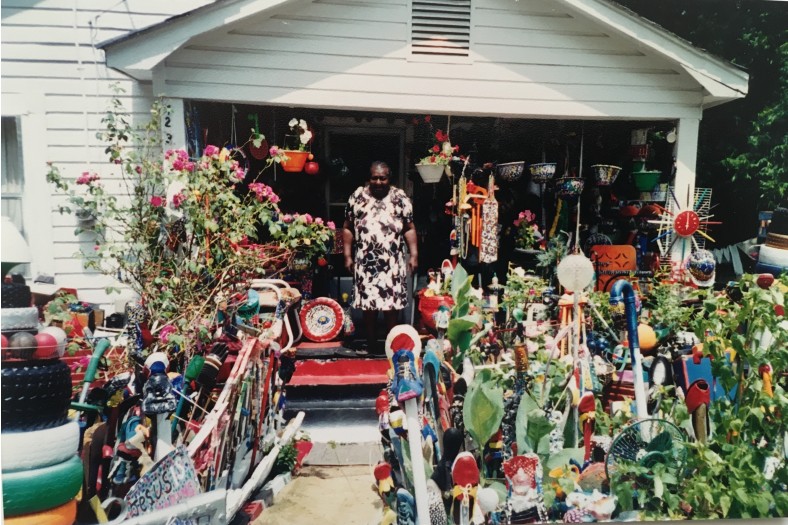 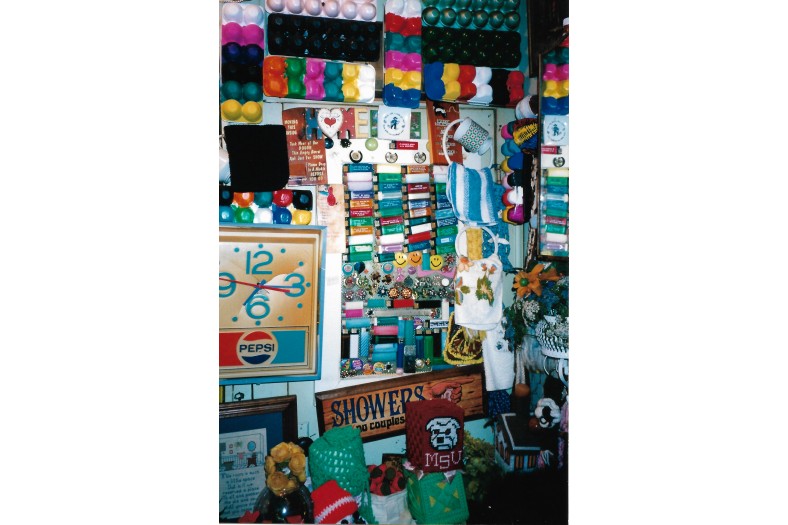 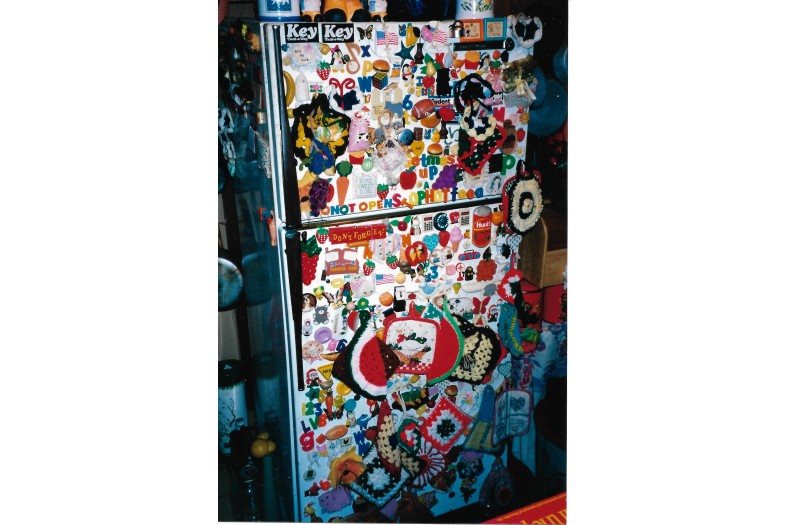 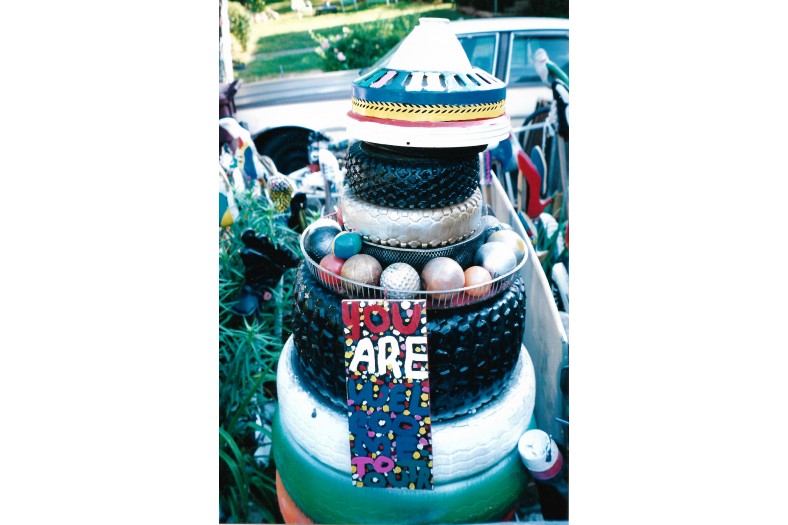 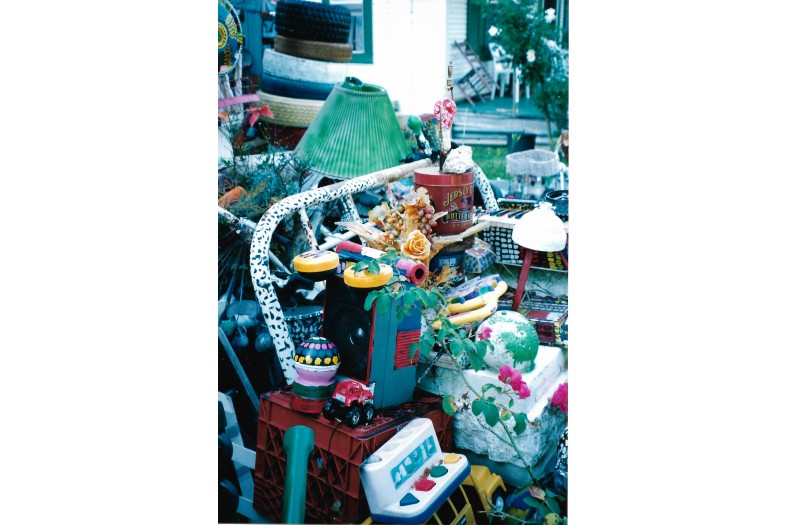 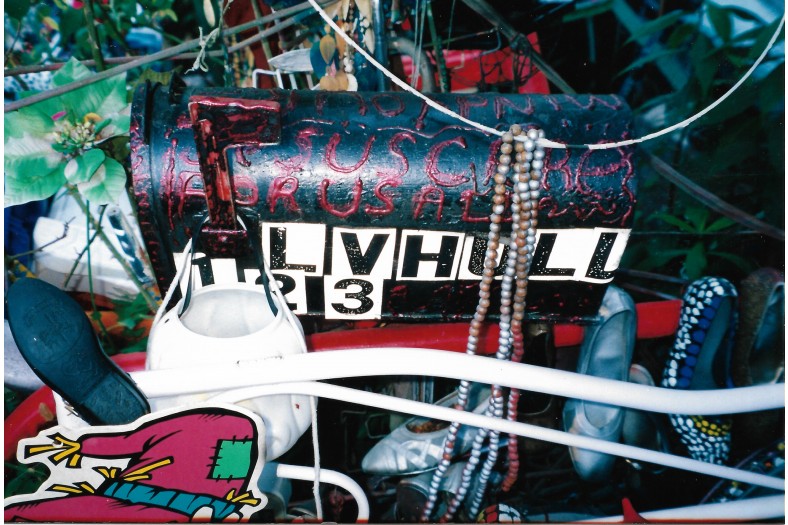 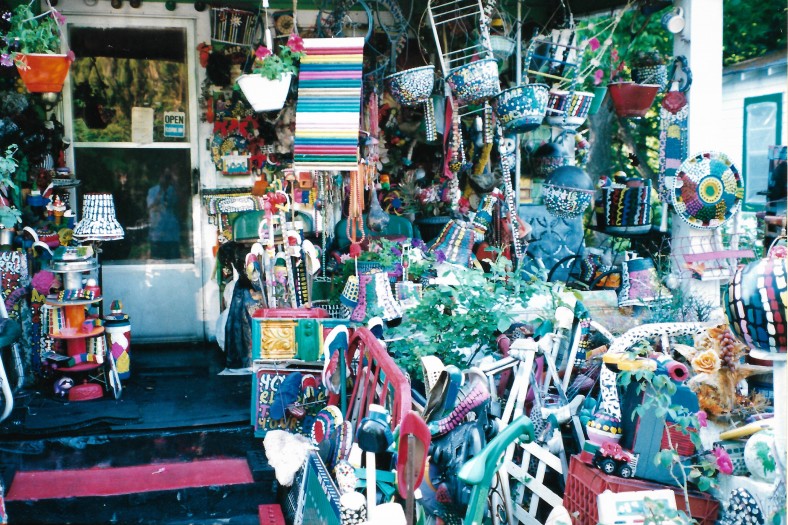 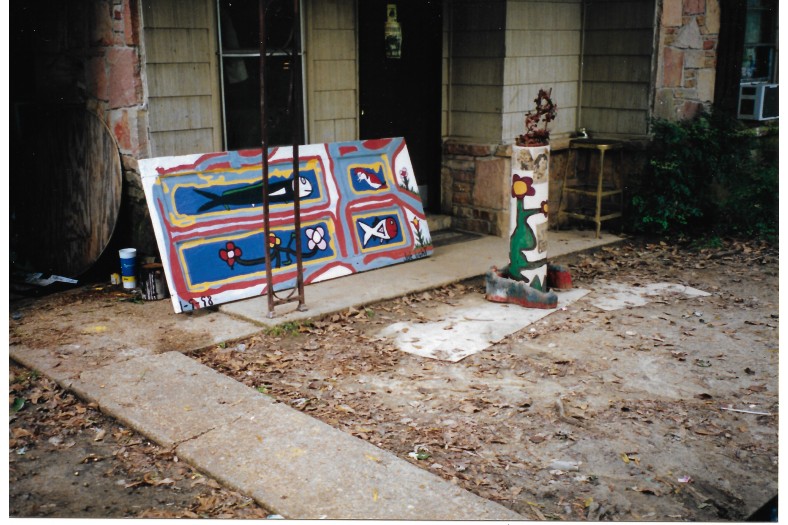 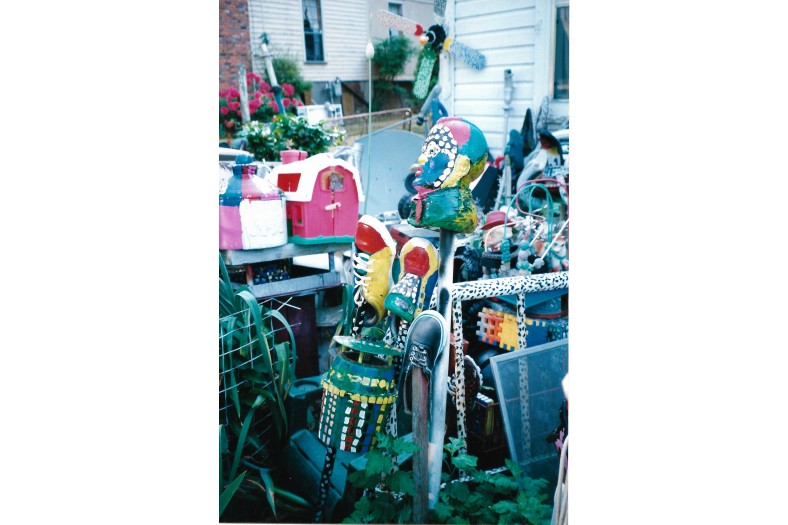 The house still stands, unoccupied, but the collection has been moved to basement of the Kosciusko City Hall. ﻿

L. V. Hull is an original, a self-taught artist and a lively raconteur. She has a house and yard incredibly crowded with her art. Hull was born and raised in McAdams, Mississippi, but moved to Kosciusko 35 years ago. Although no longer married, and with no surviving children, she retains an enormous “family” with the children she kept for others for many years, often a dozen at a time. When she sees them today, she still sees echoes of the babies in their adult faces.

Hull began creating her art in 1975. She doesn’t know why she started: “That amazed me!” But she is thankful, and says she doesn’t know what she would have done without it. She’s not sure how to teach it, since no one taught her. However, she is certain no one is doing anything like it, and is proud of having a corner on painted hubcaps and the dots that cover most of her works.

How does she create her work? When asked, she gestures in turn towards her head, heart, hands, and eyes. “And you meditate, too,” she adds. Quite a few of her recent pieces are boards painted black, then adorned with her trademark dots surrounding sayings, some familiar and some not, such as “Face powder may get a man; baking powder will keep him.” She’s not sure what she will do next, but does tend to work in series, whether on her dot-covered hubcaps, or pieces of wood encrusted with collages of discarded jewelry.

Hull is frustrated that so many garbage trucks pass by her home with perfectly good raw material for her art scattered through their cargos. These days, with her mobility limited by ill health, visitors bring her much of her supplies. But not just anything will do. Once, when she was hospitalized, a couple brought her a batch of dried gourds—so far, so good—but offered her paints in hues far more subdued than the bright colors she favors. To her, those colors looked “as dead as anybody that ever died.” Indeed, if she employs a mild color like forest green, it is only to set off some hot pink dots.

Hull gets many ideas from studying her visitors and analyzing their personalities. In turn, she is used to provoking a variety of responses. When she started out, “They said I was crazy,” she remembers. In fact, some visitors decided that she was a “hoodoo lady.” To get rid of one couple who begged her to restore their former good sleeping habits, she searched her sense of humor and solemnly told them to bury a jar with some marbles in it in a strategic location. They later returned to timidly thank her--cured, but a little afraid.

When Hull tells this story, it’s not to mock the credulous, but rather to note the power of belief. While she bemoans the passing of a pervasive “old time religion,” she appreciates the effectiveness of faith in its many forms—whether it’s trust in a doctor, in “hoodoo,” or deeply-held Christian beliefs such as her own. Her advice on making art is the same as her recipe for life: “You’ve got to care.” 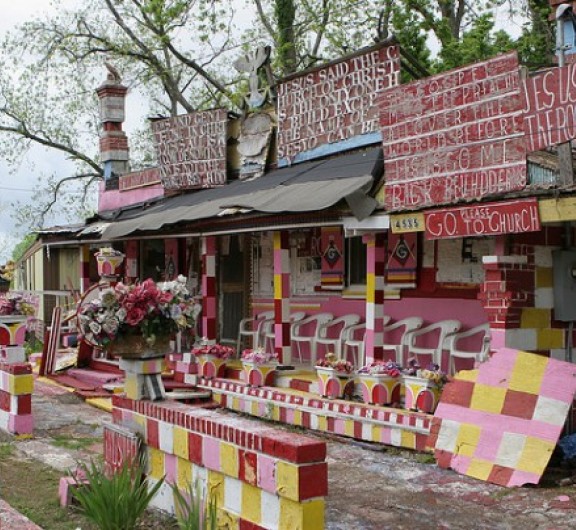 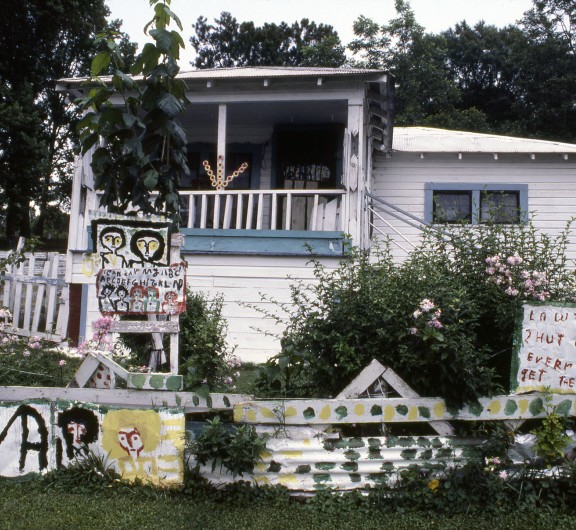