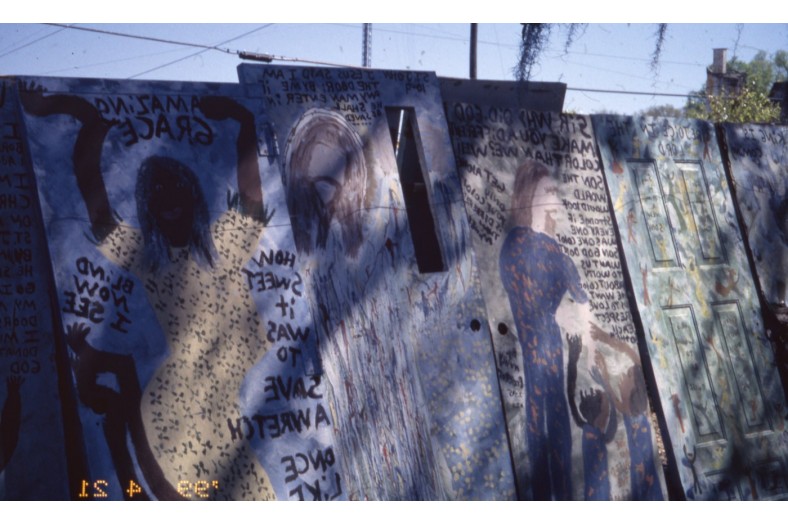 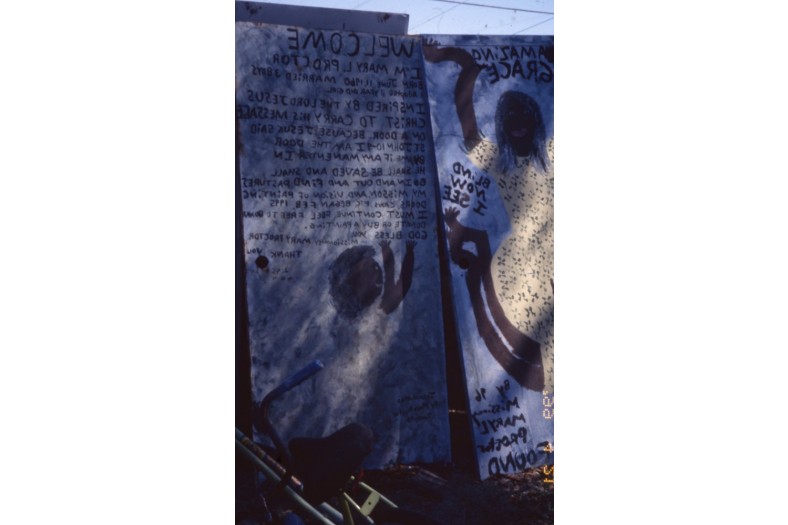 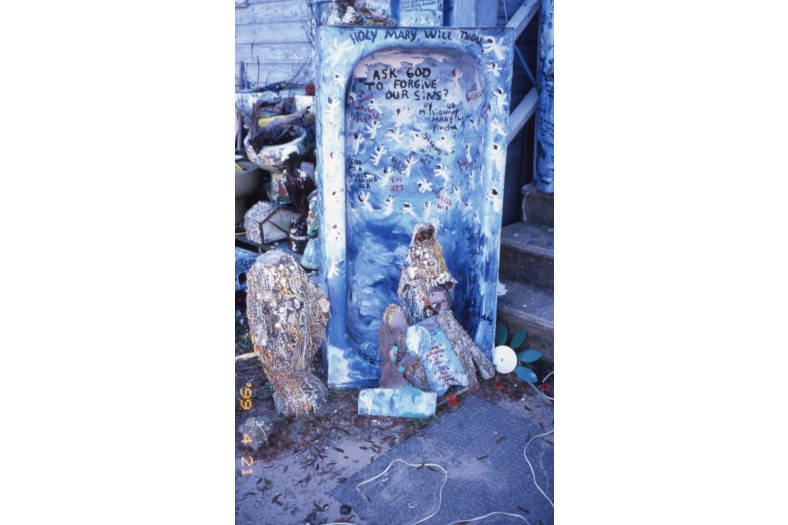 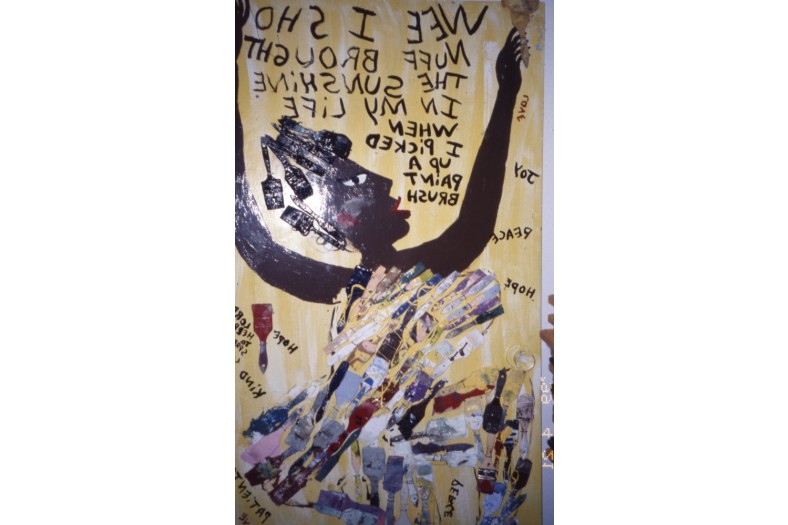 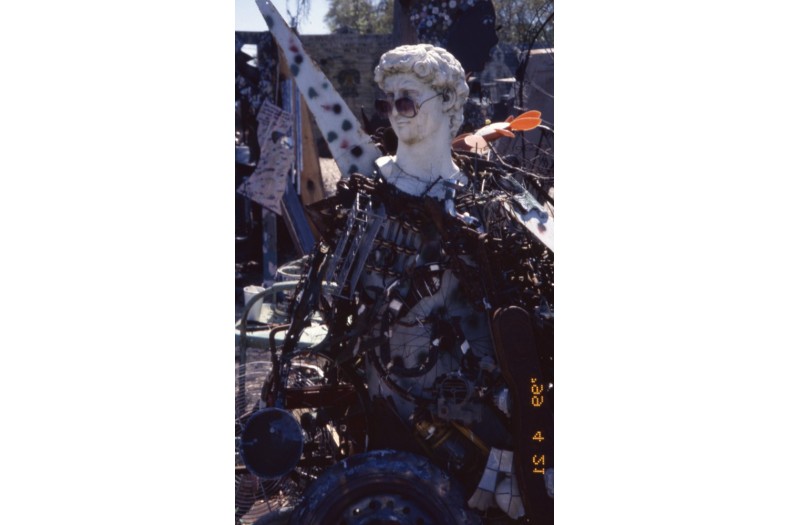 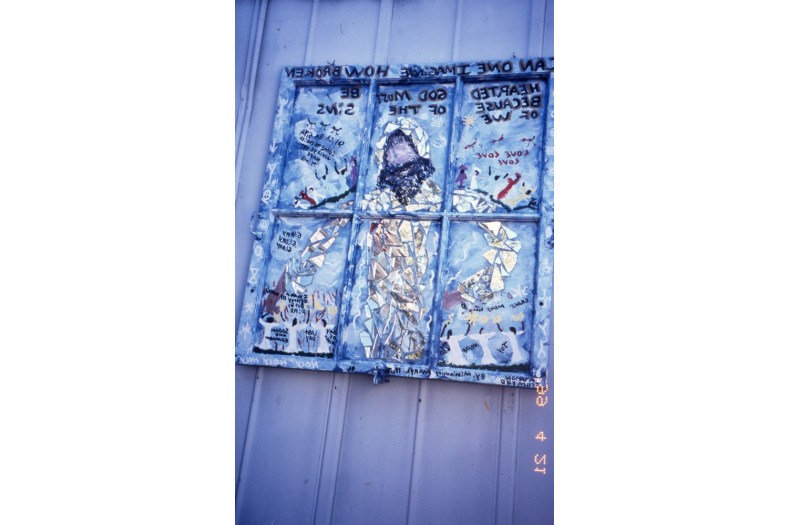 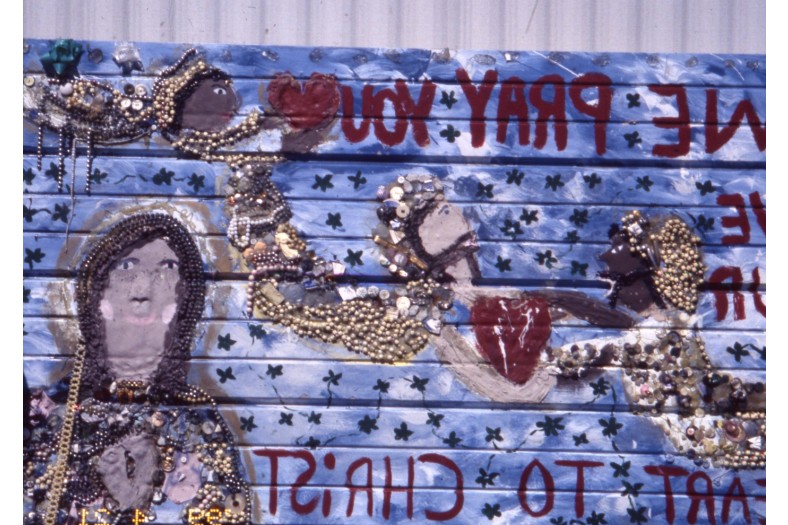 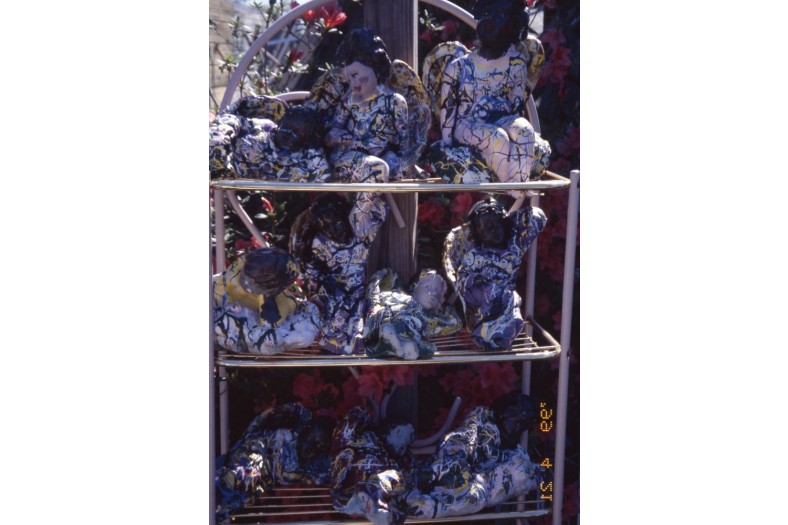 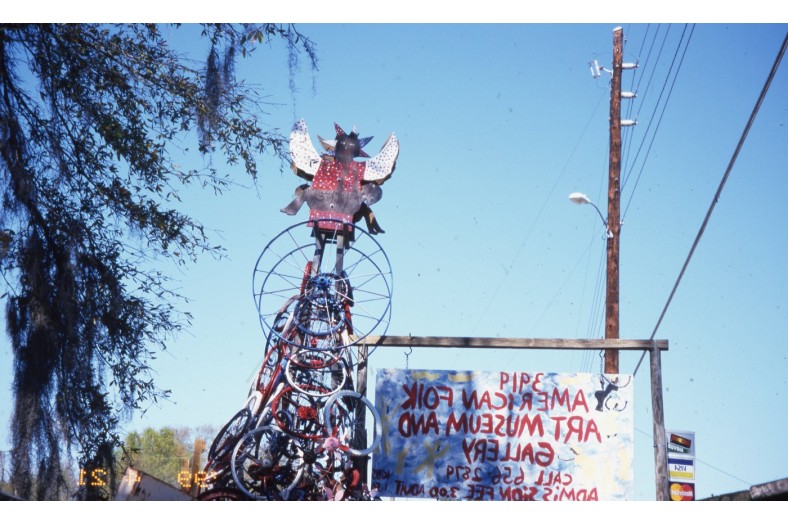 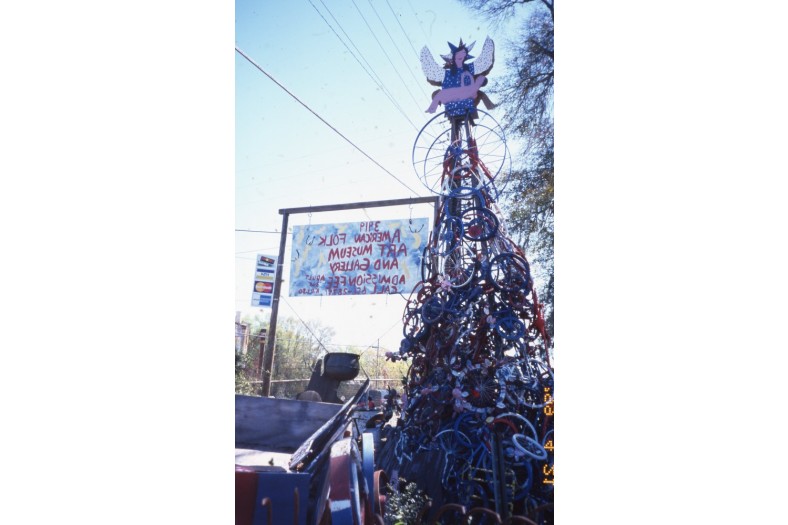 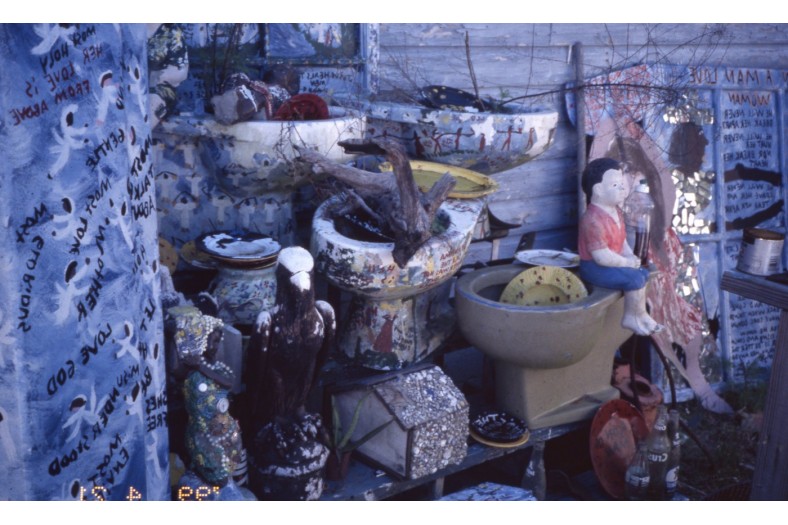 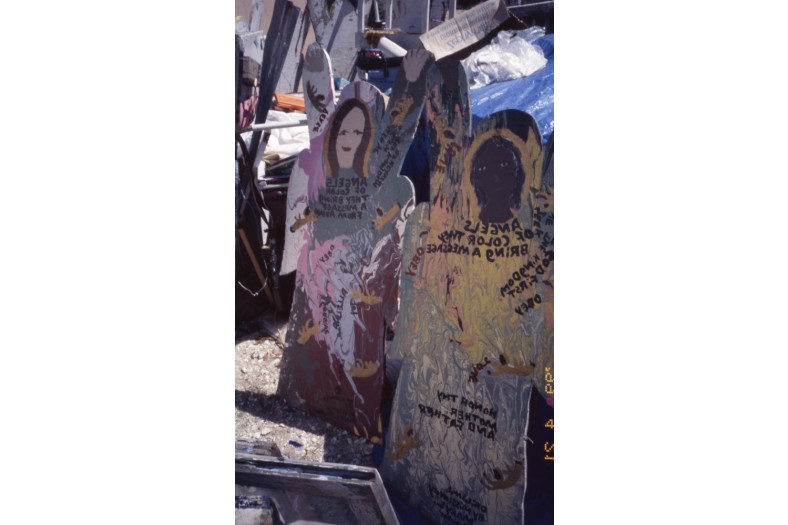 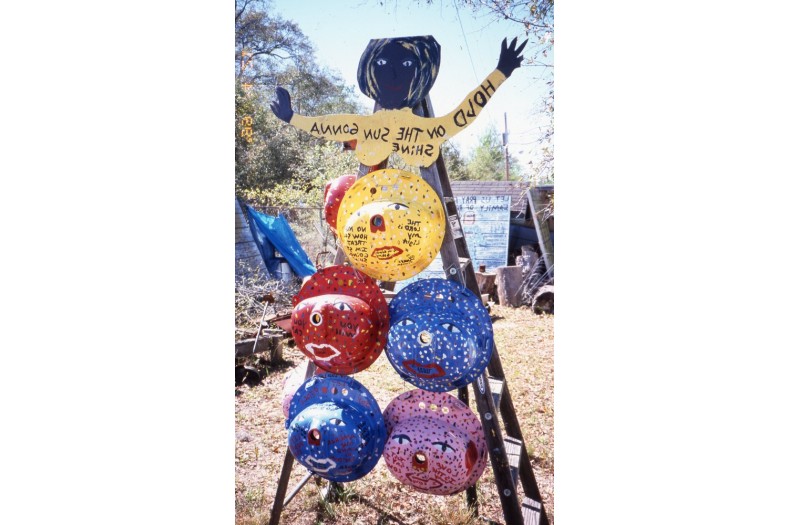 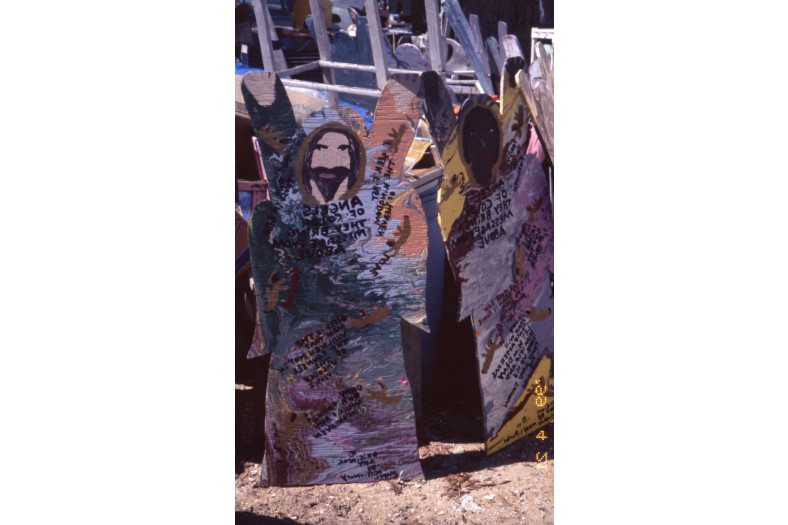 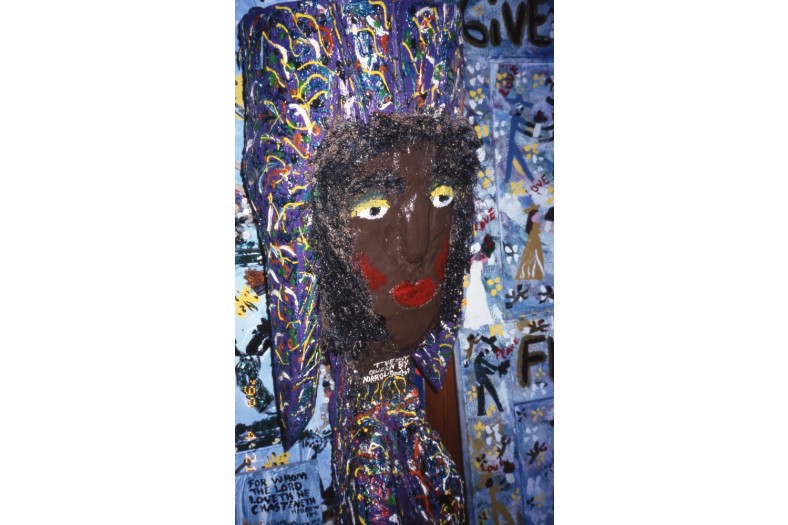 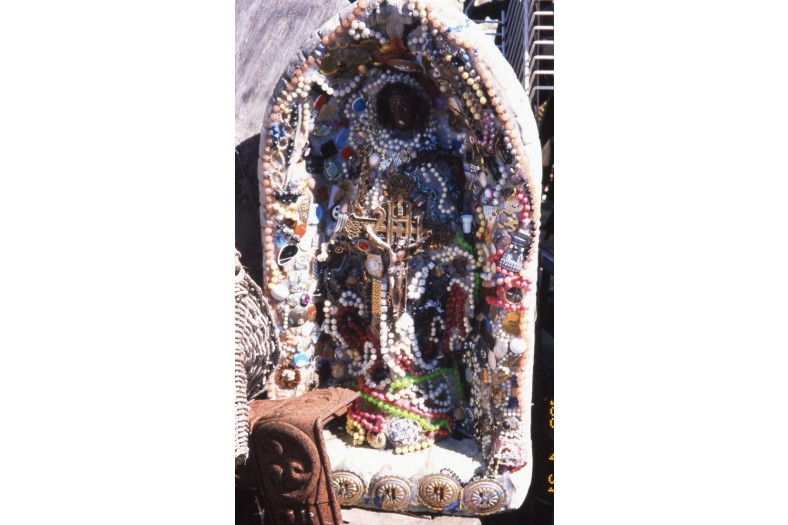 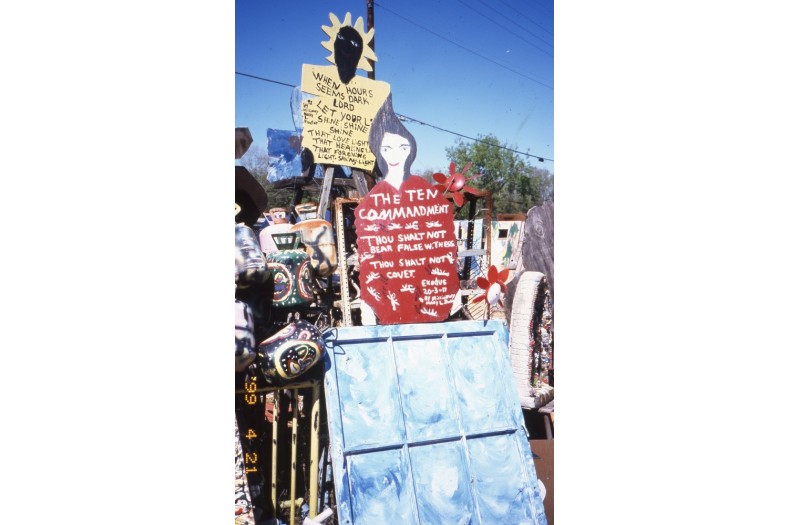 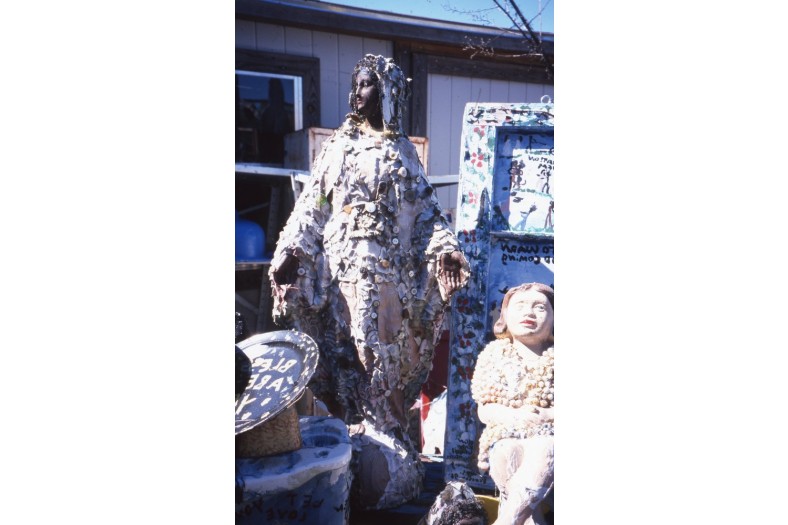 Mary's Art Yard has been moved to the American Folk Art Museum & Gallery in the Centre of Tallahassee mall. Admission is $3.

Family tragedy brought Mary Proctor to God and God brought her to painting. In 1994, while her grandmother, aunt, and uncle slept, a fire broke out in their trailer, resulting in their deaths. An hour before Mary received the call alerting her to the accident, she woke from a nightmare featuring smoke and her grandmother. Upon awakening, she went to the bathroom, and there she saw her grandmother’s face in the mirror. Grandmother said, “I’m goin’ on now. Take care of the children.” (Mary was born with a caul over one eye – a fetal membrane thought to signify the gift of “second sight” into the spirit realm, according to some Southern African American folklore.)

Traumatized and suicidal following the loss of her family members, Proctor turned to a saying from her grandmother to seek peace: “If you want an answer, there is such peace surrounding a tree.” Proctor began a daily practice of fasting and meditation at the base of an old oak tree. On the thirtieth day, “a beautiful light just shone. And I looked up, saw it shining in heaven, and I thought, instead of taking my life, God’s fixing to come back here at me. And that beautiful light just came over my spirit and said to me, “Get a door and paint.”

This directive resulted in a flurry of artistic activity, and pretty soon, Proctor’s yard was filled with sculptural and two-dimensional artwork created from the salvaged materials that had at one time constituted the inventory of her flea market. Soon after, gallerist Tricia Collins happened to drive by and notice Proctor’s collection of painted doors installed in the yard. She offered Proctor $5,000 on the spot to take ten doors to her gallery in New York. The work continued to gain recognition and is now held in the collections of the American Visionary Art Museum in Baltimore, Maryland; the Asheville Art Museum in Asheville, North Carolina; the High Museum of Art in Atlanta, Georgia; the Metropolitan Museum of Art in New York, New York; and more.

Proctor eventually left the Woodville Highway flea market when she began feeling that it was no longer safe for her to operate by herself. To better house and sell her work, she established the American Folk Art Museum & Gallery in the Centre of Tallahassee mall. Mary charges $3 to enter the gallery, and you can view her work there, including her 2004 Coca-Cola commission “The Presidents,” a collection of 42 presidents with suits constructed from flattened Coke cans. Proctor’s work often takes the form of bas-relief with wood carving and found objects painted and affixed to flat surfaces like doors. They include messages about the artist’s life and values, including, “The road has been rocky but I’m going on anyhow” – a self portrait featuring Proctor with her face and arms stretched optimistically toward the sky while wearing a dress made from carefully arranged pebbles. She’s surrounded by biographical tidbits that outline past hurdles (like the death of her family members), but she is not weighed down.

Proctor spoke about her practice to collector Bill Arnett in 2001: “My mission is just to paint it and get it out there. I come straight out with my art. My art talks straight up. My messages are the truth… I started painting because of love and healing, and if things don’t go the way I think they should go, I’ll find another avenue.”

The interview with Mary Proctor was conducted for the Eileen West Gallery in Seaside, Florida and shot on location at Mary's "Art Yard" in Tallahassee, Florida in 2010. 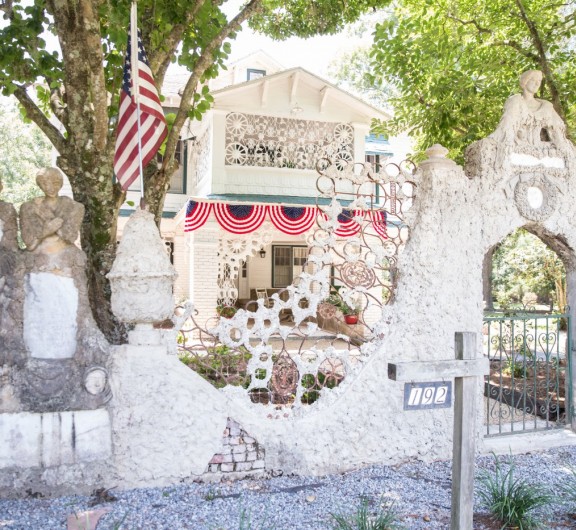 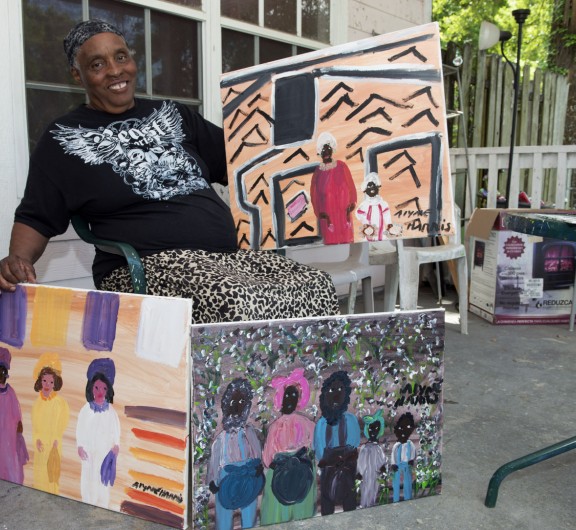 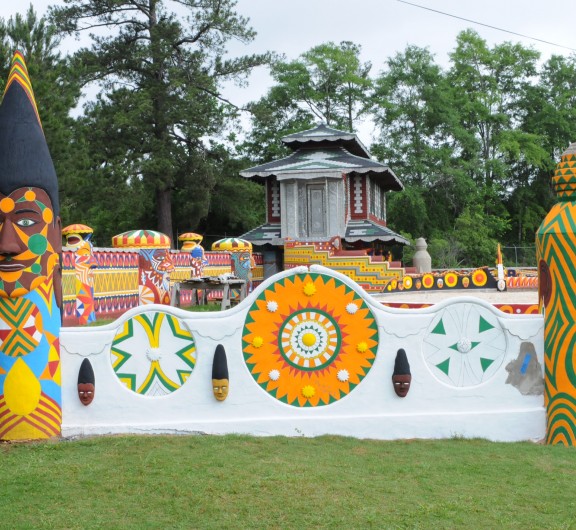 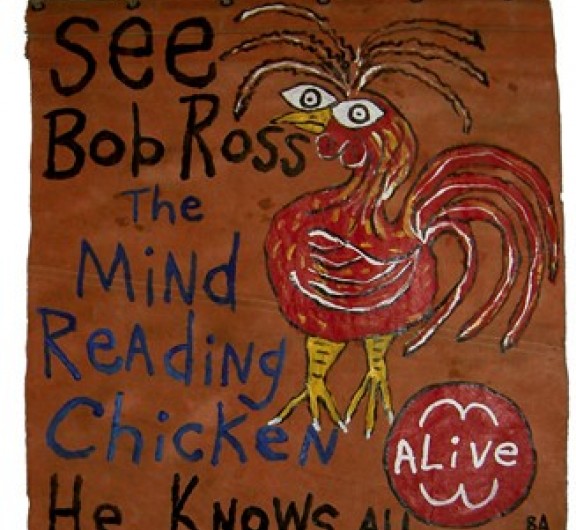 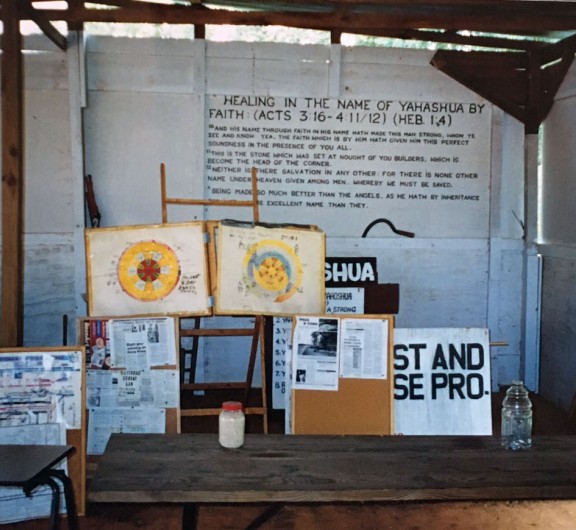