Pulsing flashes of sunlight from the westbound service road of I-80 approaching Cheyenne, Wyoming, signal that Mel Gould’s exit (#370) is coming up. He purposely leaves the spinning silver duct pipe mounted atop his Quonset hut workshop unpainted, and on fair days a driver’s peripheral vision is likely to be caught by the stroboscopic sunbursts. A sign at the entrance welcomes visitors, and upon arrival he’ll typically invite them to sit right down for an extensive golf cart tour of the Goulds’ property. Curving around an alien-piloted satellite dish flying saucer, a rotating spring-legged elephant, and a swiveling claw-snapping scorpion, he stops at a garage housing the eight-wheeled off-road vehicle he named The Purple People Eater after the 1958 Sheb Wooley song, which is playing in the background. As a young boy, Gould had already made a model for an eight-wheeled vehicle, and his metallic purple well-preserved “PPE” was the cover story for Mechanix Illustrated in 1961. [i] At age 10 he pieced together a drivable car from a Model T frame, and by high school had built a dune buggy. Pointing to another vehicle, Moon Beam, which is a sleek red rocket-ship-looking three-wheeled automobile created from various other vehicles that is on display in another garage, he notes that it pre-dates the nicknaming of a certain California Governor. Gould has seamlessly welded body sections and parts of junker autos into several other pedal- and gas-powered composite vehicles as well, parked and viewable around the property, and he has also assembled a fully battery-powered forklift from a variety of sources, pleased by all the money he has saved with this invention. Although his property is also populated by metal bears, horses, zeppelins, and purse-carrying ladies (to list a few), Gould says he never intended to build an art environment, and the self-described “tinkerer and pack-rat” doesn’t think of himself as an artist. But he likes to stay busy, “get something done every day,” and when he sees radiator fans and shock absorbers in the junkyard of scrap around his workshop, he can’t but help think: “spring flowers....”

Born in San Luis Obispo, California, Melvin Gould was raised on a small farm in the country, and he graduated from high school in 1949. He joined the Air Force in 1950 and although he applied to be a heavy equipment operator, he found himself a cook stationed in Greenland during the Korean War. After being transferred back to Warren Air Force Base in Wyoming, Gould was discharged as a Staff Sargent in 1954. Afterward, he and his wife Opal settled into their current property east of Cheyenne, and despite not having an engineering diploma, he went to work for the R&D department of Denver-based Foresight Industries, a position he held for twenty years. His design contributions included anchors and mechanisms for Christo and Jeanne-Claude’s Umbrellas and Surrounded Islands projects, and during his tenure at Foresight, as Gould tells “with no regrets,” he “made other people rich” by supplying the company’s (official) engineers with product ideas from his own practical experience and inventive mind.

With ruler line horizons in all directions, the Wyoming winds animate Gould’s outdoor sculptures almost unceasingly as trucks and cars drone by on I-80. A giraffe with fork eyelashes bobs his motorcycle gas tank head, propellers on small military planes whirl, a cowboy bounces in place on his slinky-legged horse, and large wind-catching contraptions grind, rattle, and spin. Near Gould’s homemade solar paneled house, Wind Thing, a two-and-a-half-story green tower structure topped by spinning barrels, looks like an oversized whirligig sculpture, but it serves to power his mega man-cave, Buryville. This “cave” was constructed in 1983 when Gould dug out enough ground next to his house to bury and interconnect an empty bus frame, grain silo, camper, and 55,000-gallon concrete fuel tank.

Accessed from the basement, Buryville opens up into a music room, display area, and additional workshops that are filled with numerous tools, machines, and devices. Gould converted a human-sized metal locker into a smooth electric elevator ride between the kitchen and basement; Opal laughs that it is her favorite of his inventions. Gould sings and plays the guitar, harmonica, and foot percussion in Buryville’s carpet-walled sound studio, and behind glass in the walkway outside are displayed his mechanical guitar-playing inventions. There is also a life-sized animated Washer Woman who can be switched to life, and another work, a Jacob’s Ladder for the electrical-age, reflects Gould’s religious inclinations: attached to a generator, a pair of meter-long diodes carry upward an endless progression of sizzling arcs.

Mel Gould is a soft spoken, low key, calm man with a close-knit family, and he shows no outward signs of being the hyperactive inventor and environment builder he is. He often mentions that after he retired, Opal happily continued on with most of the household chores, thus allowing him “time to play” (and build). On the first day I arrived, as a stranger, the Goulds sat me down for dinner with the family, and for much of the next day their high school-aged grandson sat in as a substitute for Gould while I prepared portrait shots (and we talked about how he really has the coolest grandfather ever). Before I departed the following day, Gould gave me a present to bring to my wife: an amber-colored jewelry pendant resembling translucent polished stone but made from tumbleweed and cereal, created through extreme compression by methods and machines, no doubt, of his own invention.

Visitors are warmly welcomed by the Goulds, and the artist-inventor seems to never tire of giving a tour of his works and property.

[i] Harrington, Bradley, “Mel & Opal Gould & Their “Tinker Toy” Home.” The Liberty Torch, Cheyenne, WY, April 2012. Gould said: “I built this in 1959.  It was a Crosley originally, but I modified it a bit <laughing> I gave it a Chevy hood, and it has a 1934 Ford 8-cylinder flathead engine and a 4-speed transmission. It has a dual Model A rear end.  We used to use it to go hunting. It made the cover of Mechanix Illustrated back in 1961.”

Visitors are warmly welcomed by the Goulds, and the artist-inventor seems to never tire of giving a tour of his works and property. 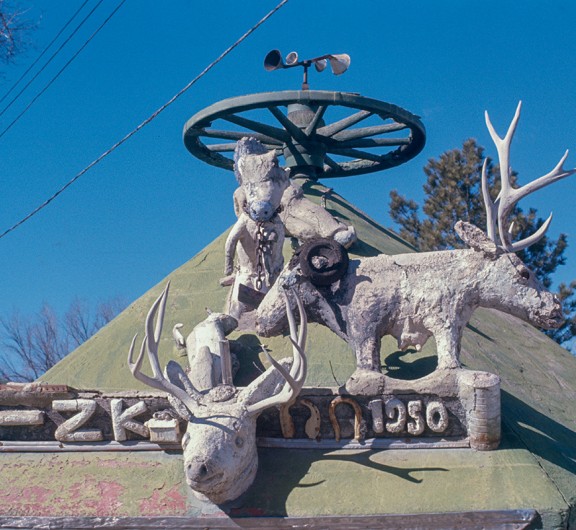 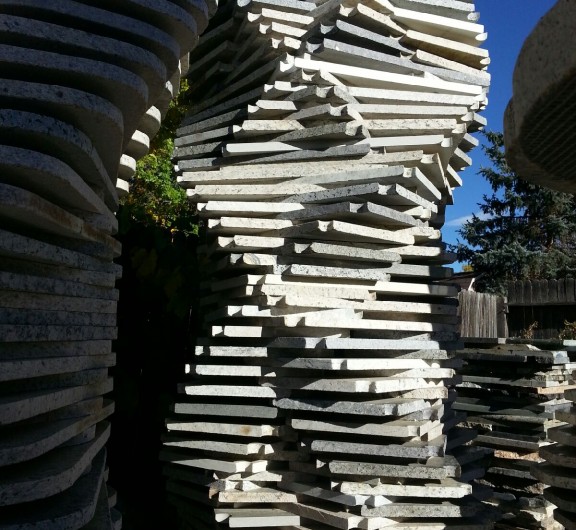 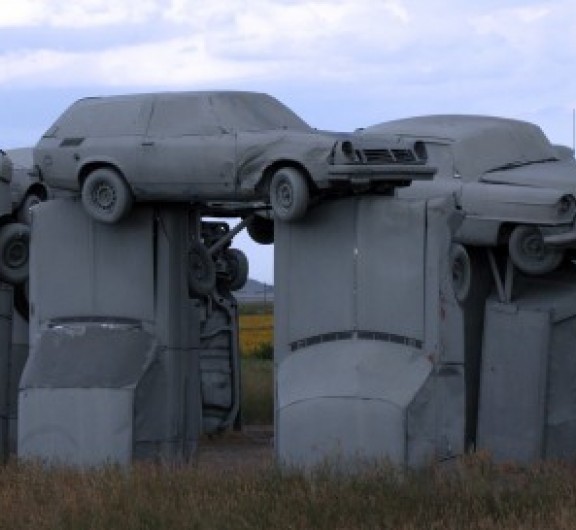 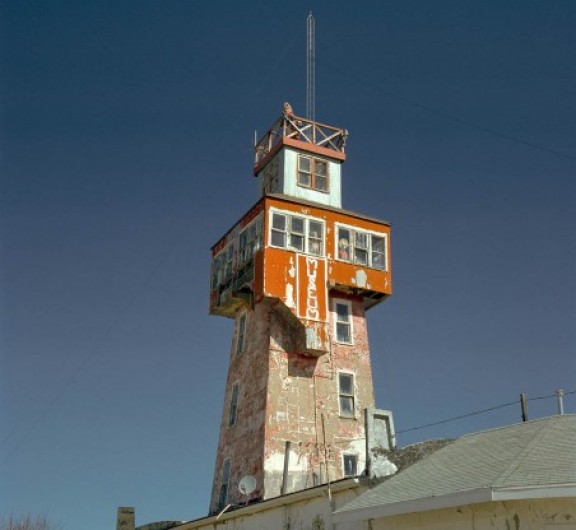