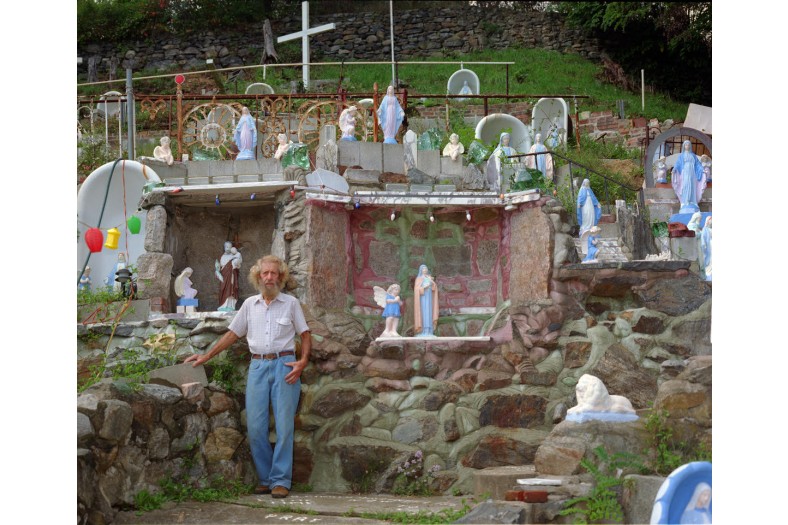 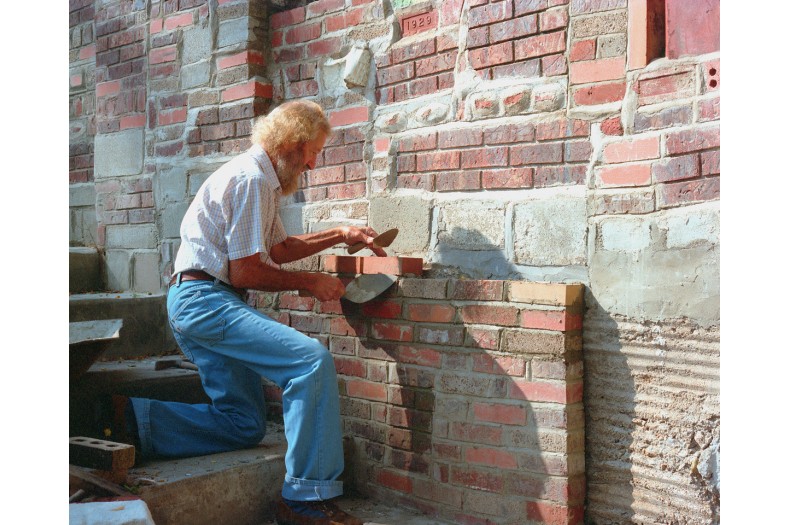 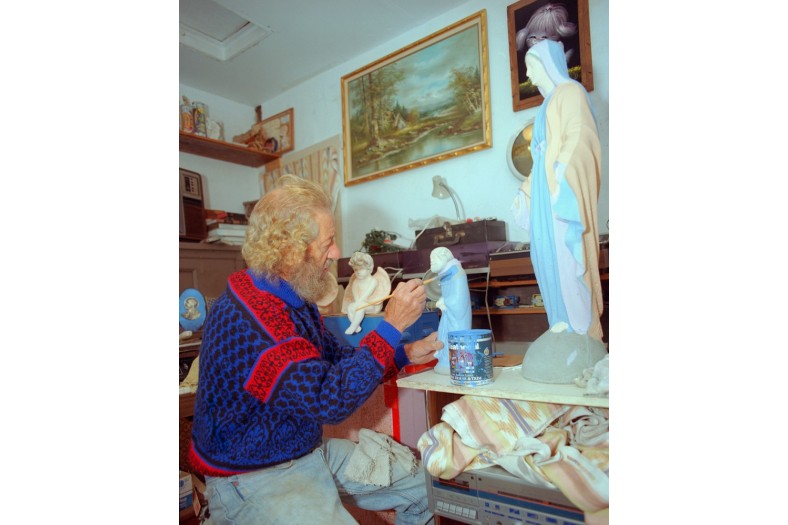 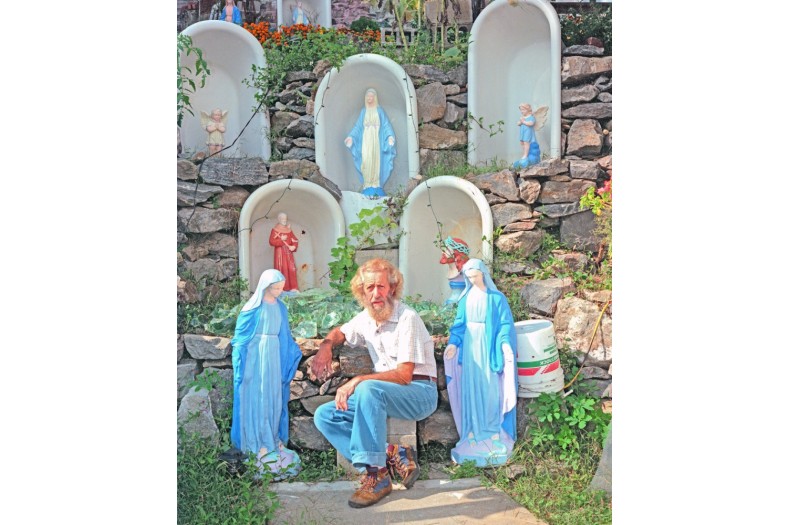 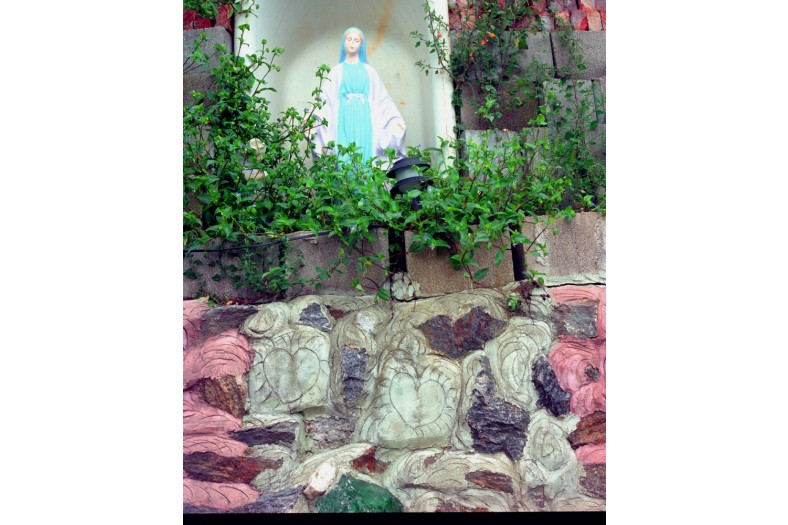 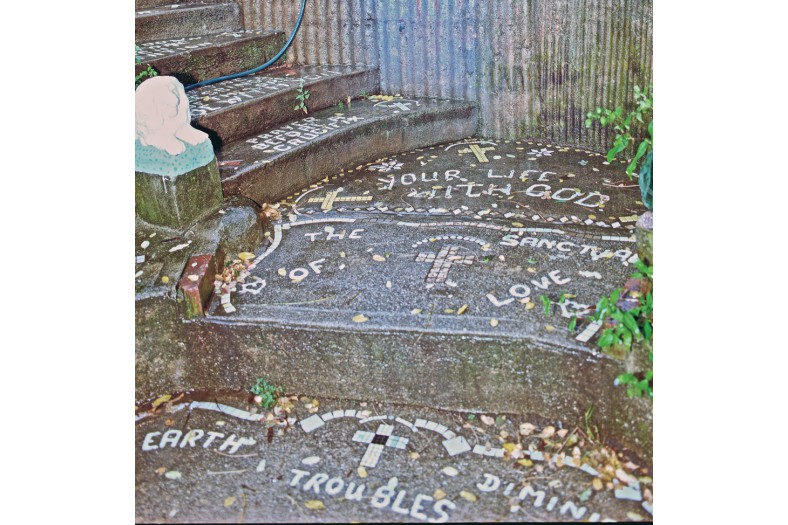 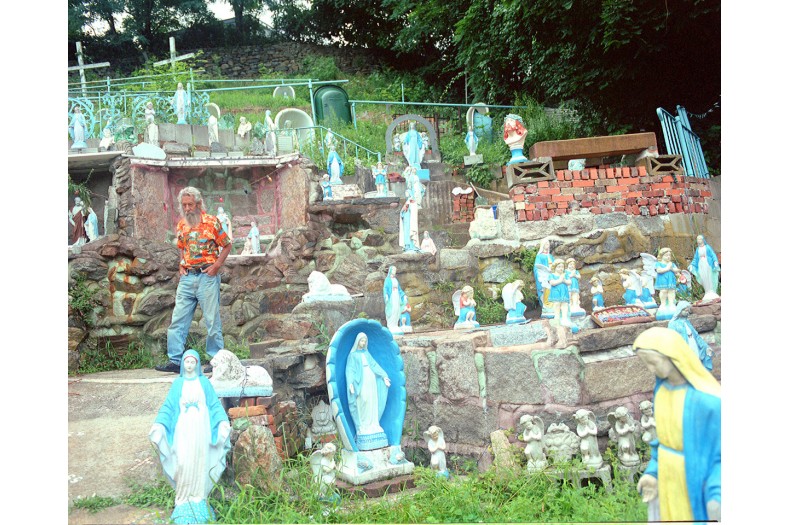 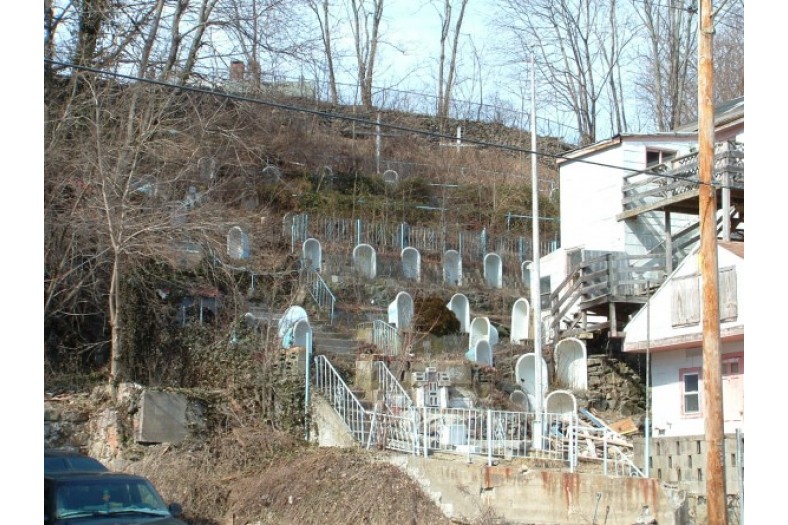 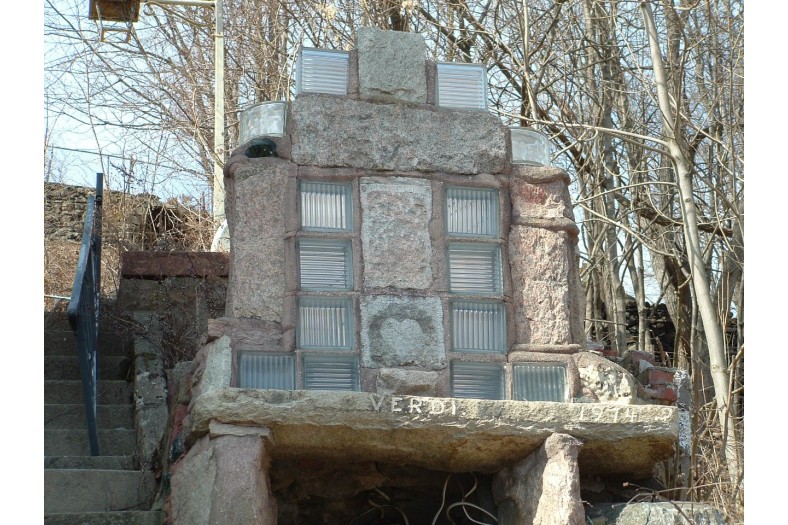 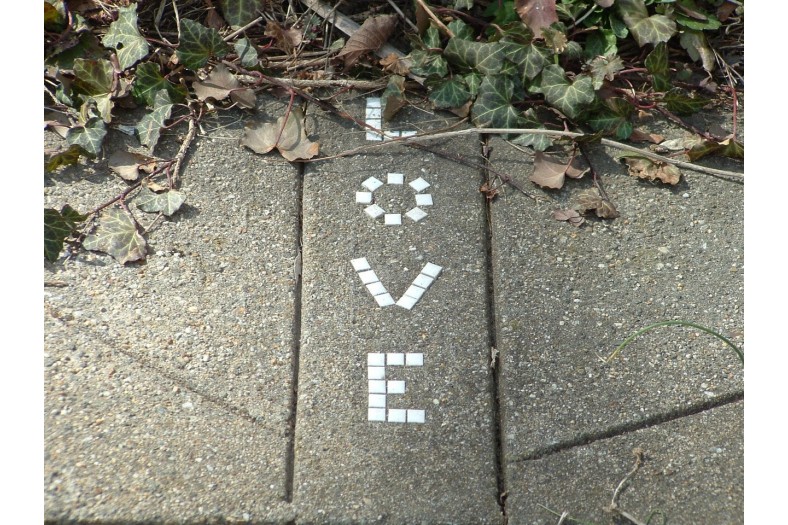 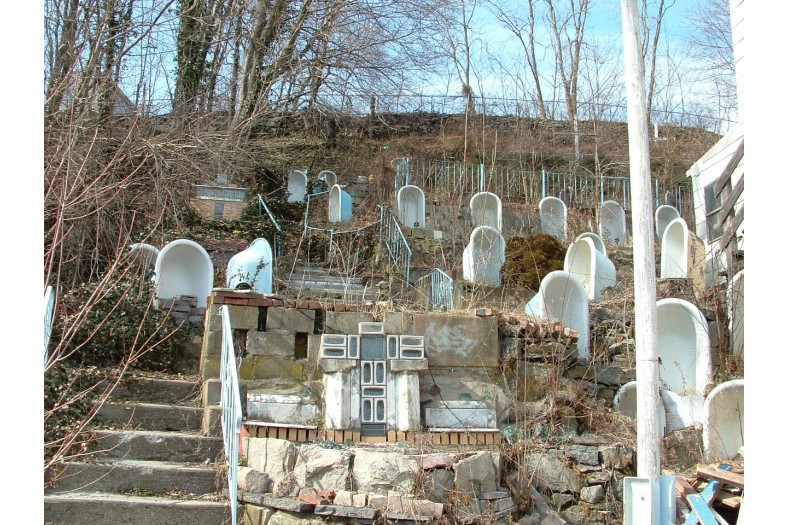 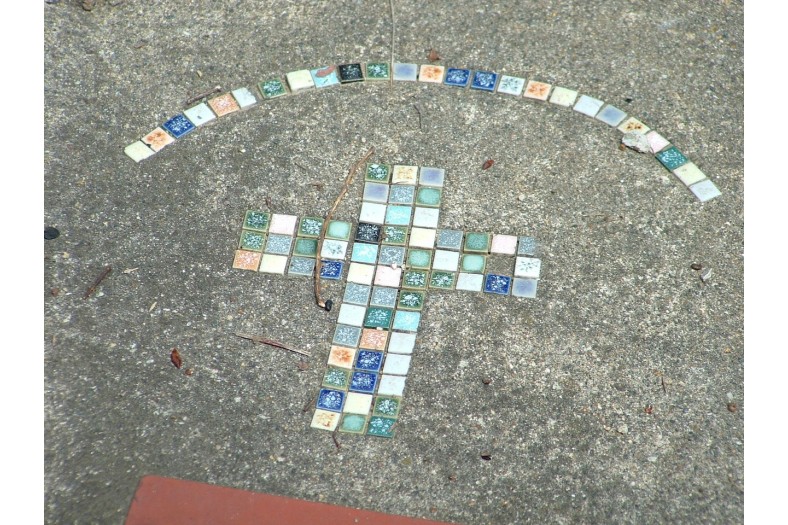 Sometime around 1970, Salvatore Verdirome, a rigger at a nearby shipyard, began building a religious shrine on the steep hillside behind his home in Norwich, Connecticut. The Sanctuary of Love would eventually feature forty-seven cast iron bathtubs sheltering statues of the Virgin Mary and other saints. Working alone, Verdirome used a wheelbarrow to haul the tubs up the hillside, although each weighed between 300 and 400 pounds. He continued to develop the site for thirty years.

A huge cross, made of granite and glass blocks, stood at the site’s entrance. Verdi reproduced the “Sea of Glass” described in the New Testament’s Book of Revelations by spreading crushed bottle-green glass fragments, scavenged from the nearby Thermos factory, at his site. He built rising tiers that featured rows of stones for each of the biblical Ten Commandments and the Stations of the Cross.  He installed three full-size white crosses at the top of the hill.

Verdirome utilized marble, stone, slate, concrete, granite blocks, cobblestones, glass blocks, and both red and yellow bricks in the Sanctuary. He arranged small colored tiles and set them into steps to form delicate crosses, stars, and the word “Love.” He ran electrical wiring through the site, which was illuminated from 4 p.m. to midnight, all year round.

Verdirome was, by all accounts, a simple, devout, and generous man, who filled his pickup with empty bottles and cans to trade for food that he then dropped off at homeless shelters. His Sanctuary’s demise came when the city demanded payment on years of back taxes Verdirome had neglected to pay. City officials foreclosed the property in 2000, and removed and sold the statuary at auction. The property was also sold at auction soon thereafter. Eighty years old and ailing, Verdirome was placed in a nursing home and died in 2004. As of spring 2011, his house remains standing – shuttered and unoccupied. Remnants of the Sanctuary can be seen behind it.

The SPACES archive contains clippings and digital photographs from 2006. 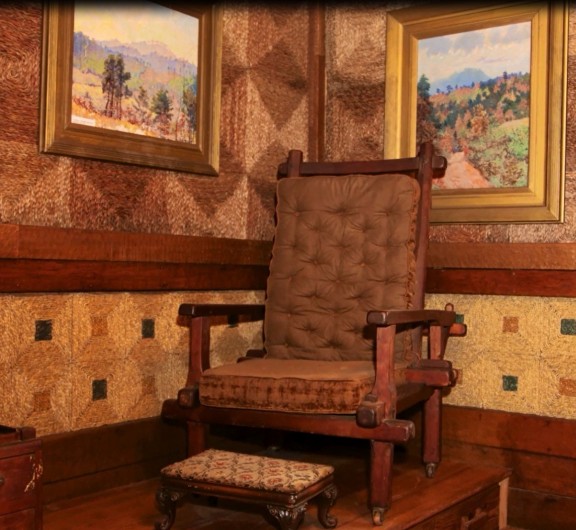 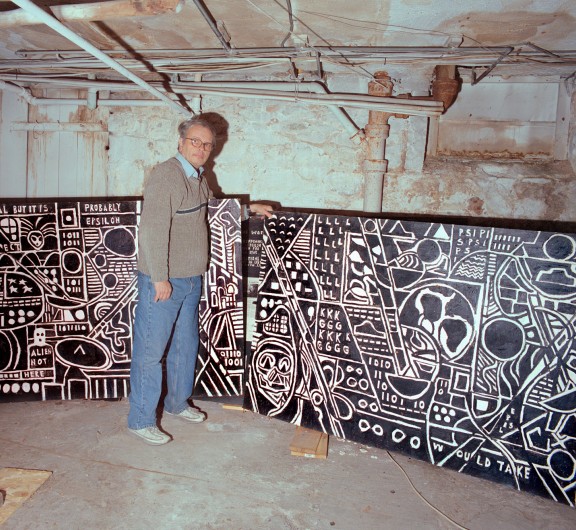 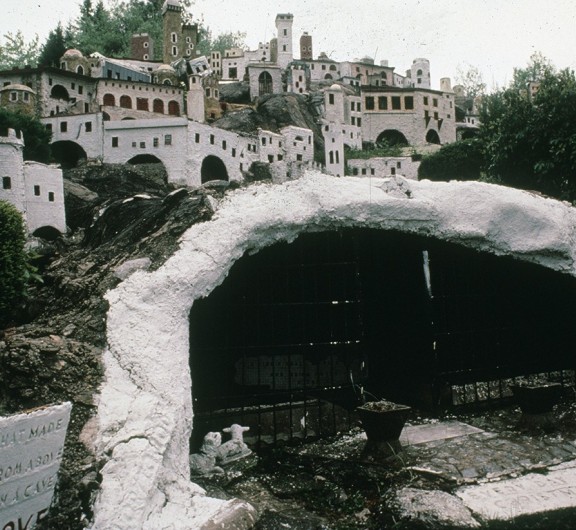 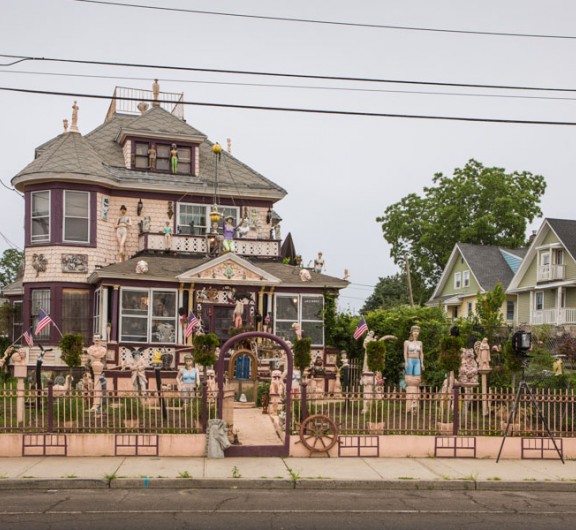 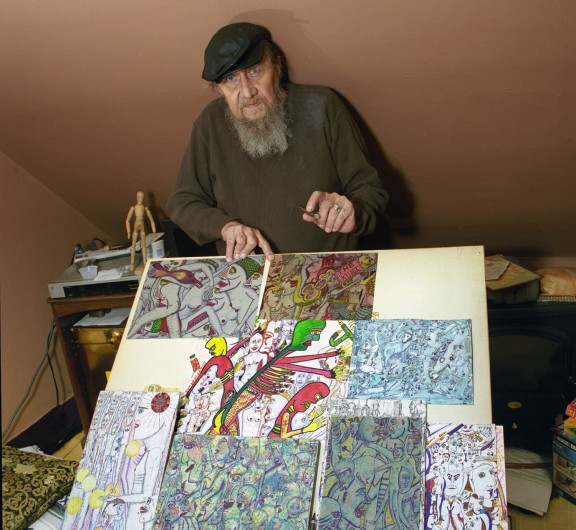