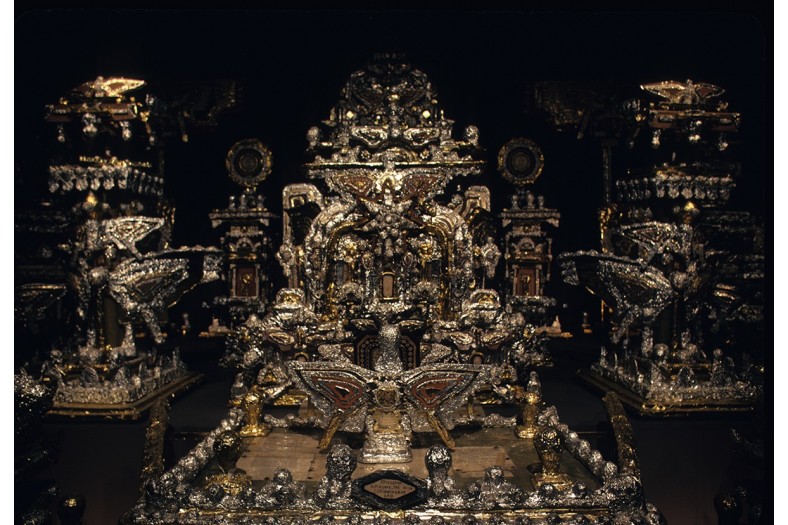 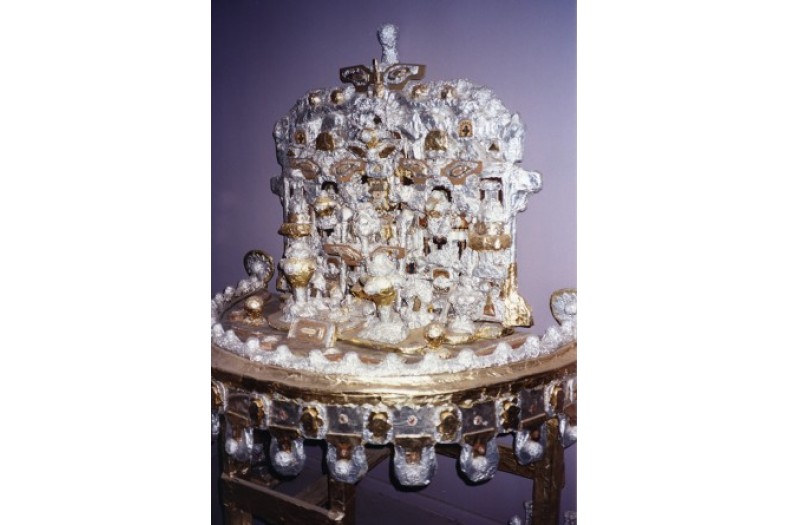 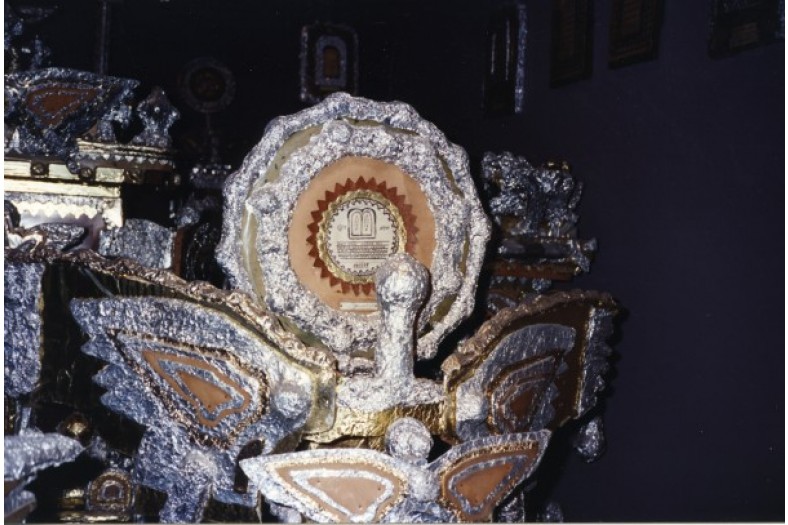 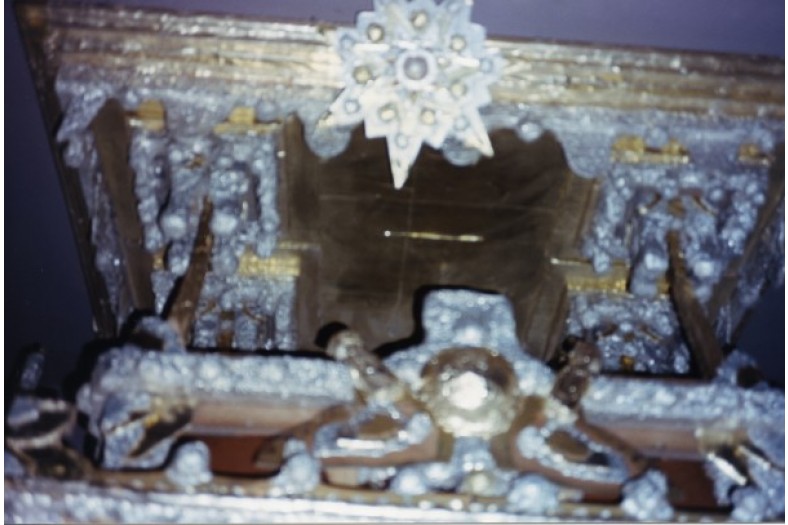 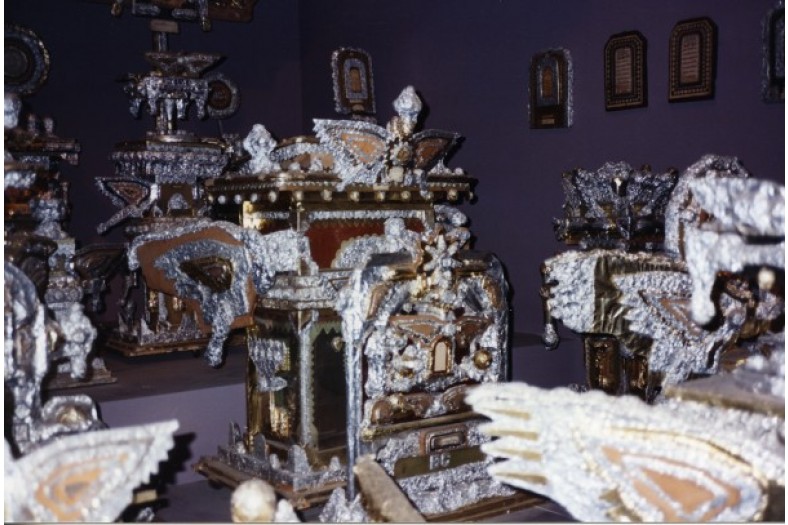 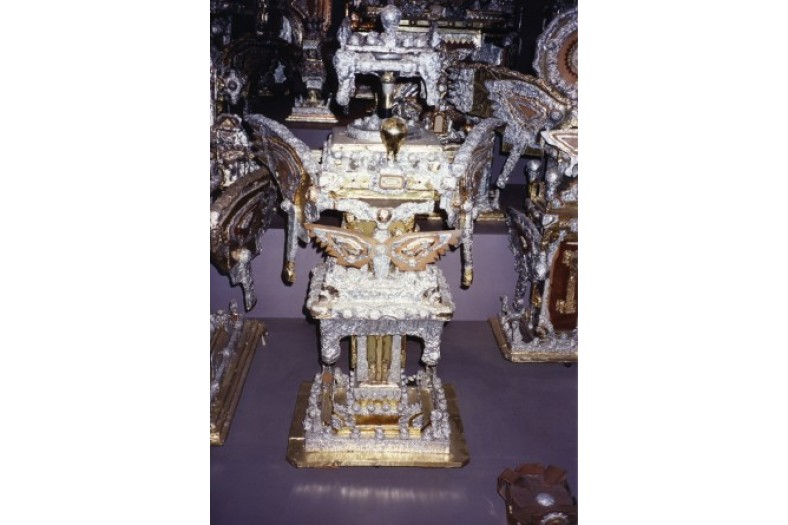 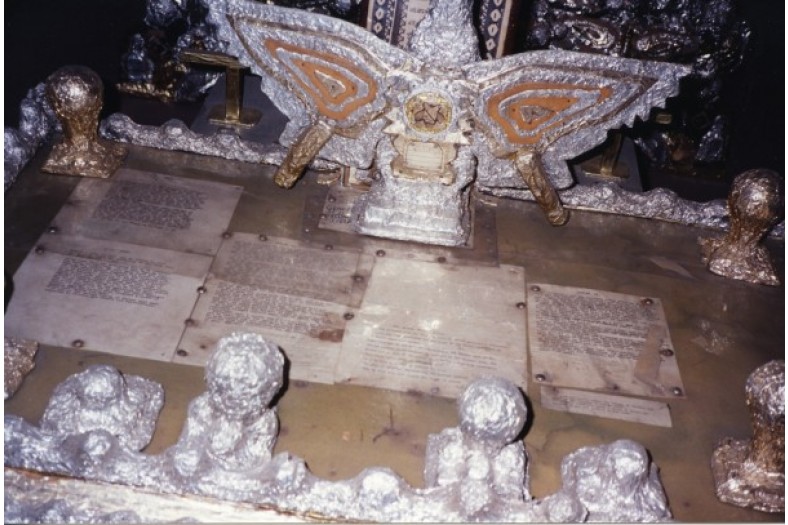 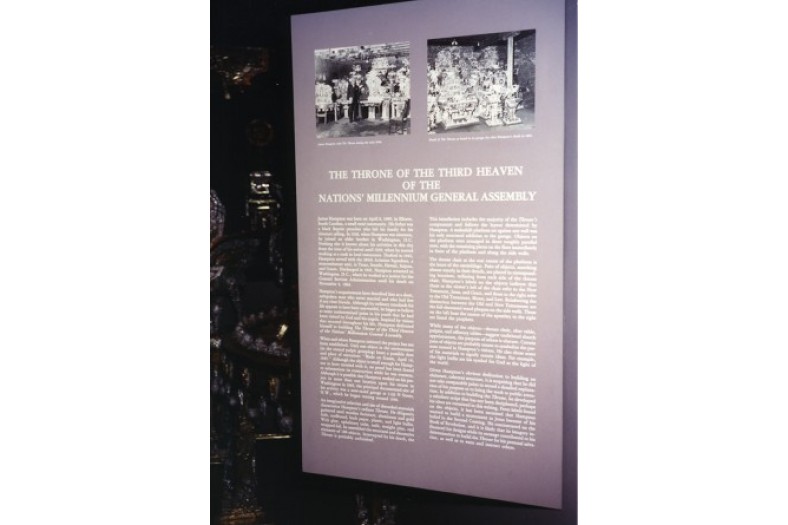 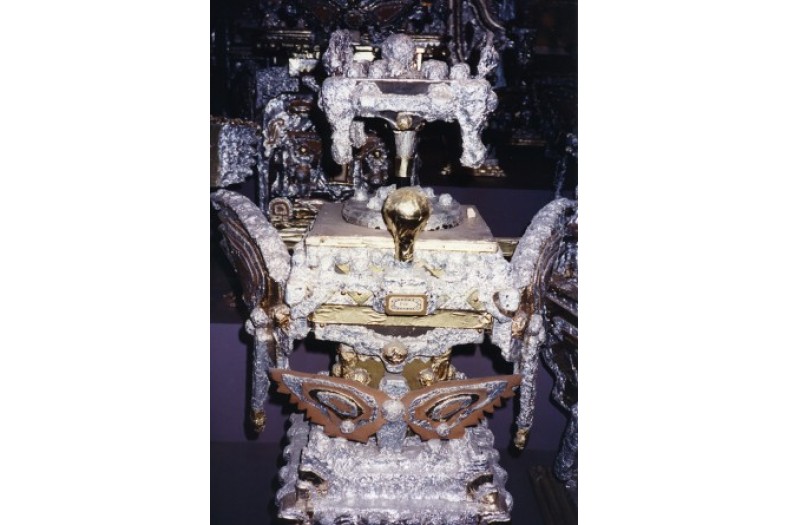 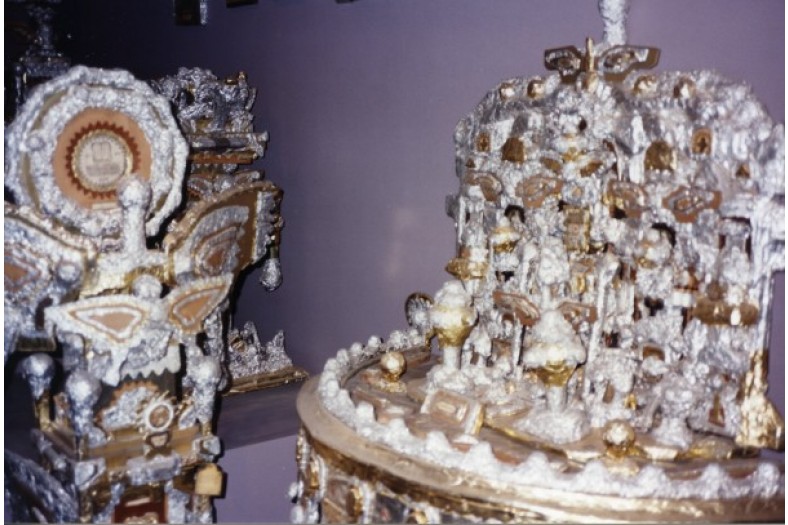 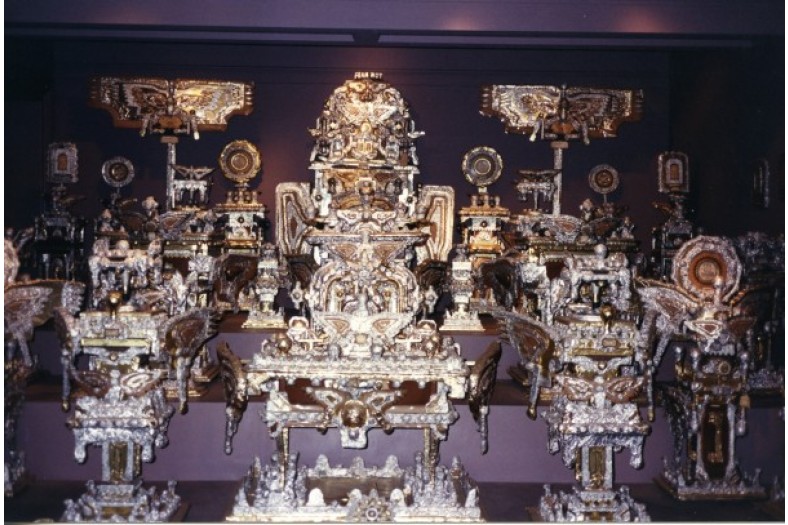 The Smithsonian American Art Museum is open Thursday to Sunday from 11:30am to 7pm.

Between the years of 1950 and his death in 1964, a secret spiritual project was being quietly carried out in a rented brick garage near 7th and N Streets NW in the nation’s capital. The maker was James Hampton, a small, quiet African-American man who had worked as a custodian for the General Services Administration since 1946.

Hampton was born in Elloree, SC. As a young man he traveled to Washington, DC where he worked various odd jobs. He also served in the military during WWII.

Although Hampton left behind a journal after his death, it was written in a code that has not yet been broken. His writings reveal that he had seen visions of the Prophet Moses and even the biblical Adam. His goal was to create a holy environment suitable for the return of Jesus Christ and for the glory of God.

In his writings he referred to himself as “Director, Special Projects for the State of Eternity” and sometimes called himself “St. James.” His garage environment consisted of a central throne with a red velvet cushion and angelic wings on each side. To the viewer’s left of the throne were various lesser altars, pulpits, offertory tables and chairs—all elaborately decorated with shiny, radiant tin foil, fragments of mirror, light bulbs and other reflective bric-a-brac—and all referential to Jesus Christ and the New Testament. To the viewer’s right was a symmetrical continuation of decorated altars and tables dedicated to Moses and the Old Testament. The environment of over 180 pieces was primarily created from found materials.

Not long after Hampton’s death in 1964, the landlord opened the garage for the first time; overwhelmed, he contacted a reporter about his discovery. Word spread, and the entire religious environment was soon carefully removed by staff of the Smithsonian American Art Museum in Washington, DC so that it could be added to their permanent collection. The exhibition label at the museum describes Hampton’s environment as using “…discarded materials and found objects consisting of old furniture, wooden planks and supports, cardboard cutouts, scraps of insulation board, discarded light bulbs, jelly glasses, hollow cardboard cylinders, Kraft paper, desk blotters, mirror fragments and electrical cables and a variety of other ‘found objects,’ all scavenged from second-hand shops, the streets, or the federal office buildings in which he worked.”

Update Feb. 2017: Today, the environment is on permanent display at Smithsonian American Art Museum in Washington, DC. There are no other pieces of this environment in private hands, although two works are included in the permanent collection of the Milwaukee Art Museum. 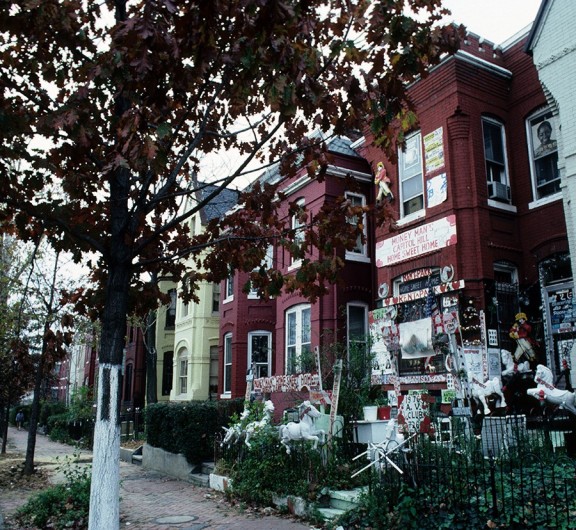 House with Placards and Signs 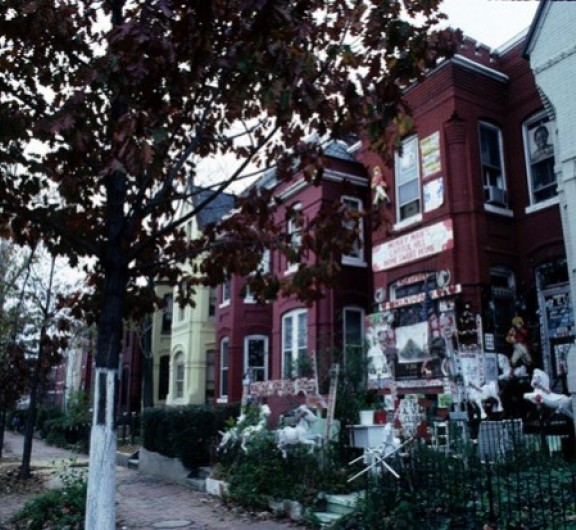 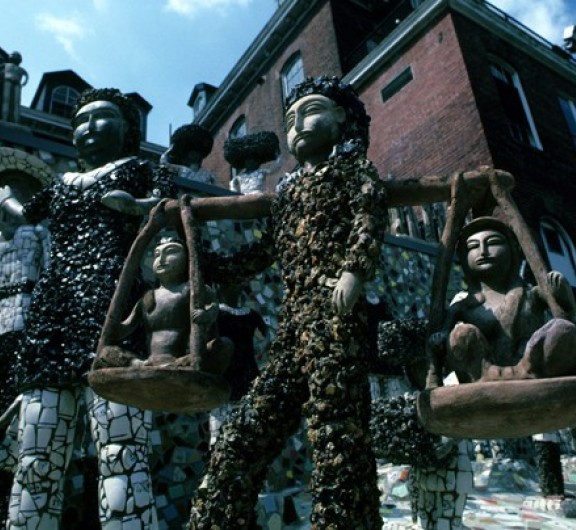 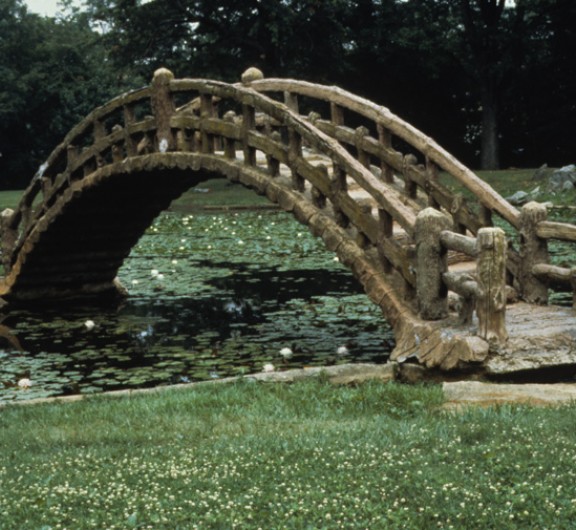 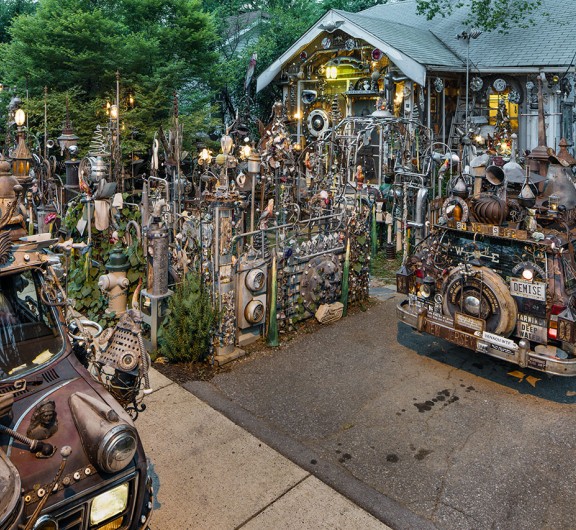