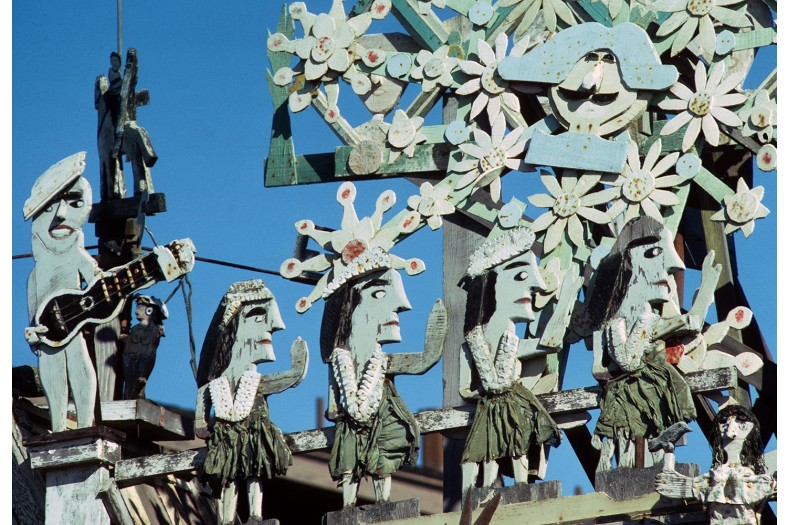 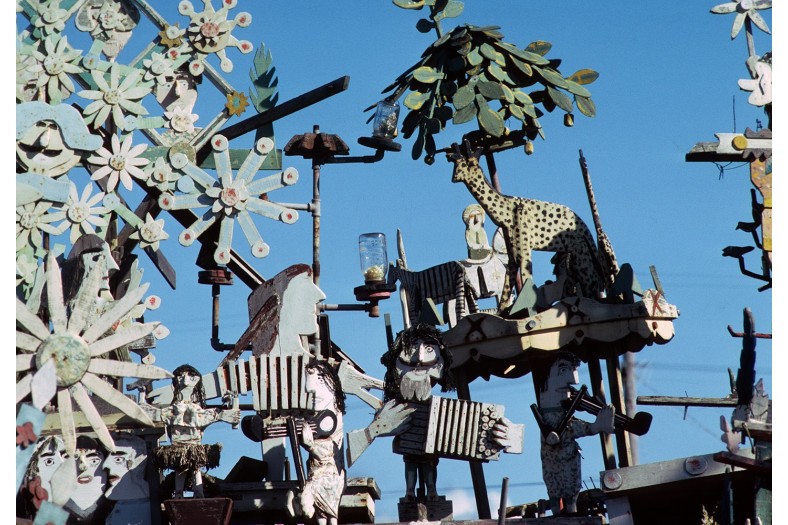 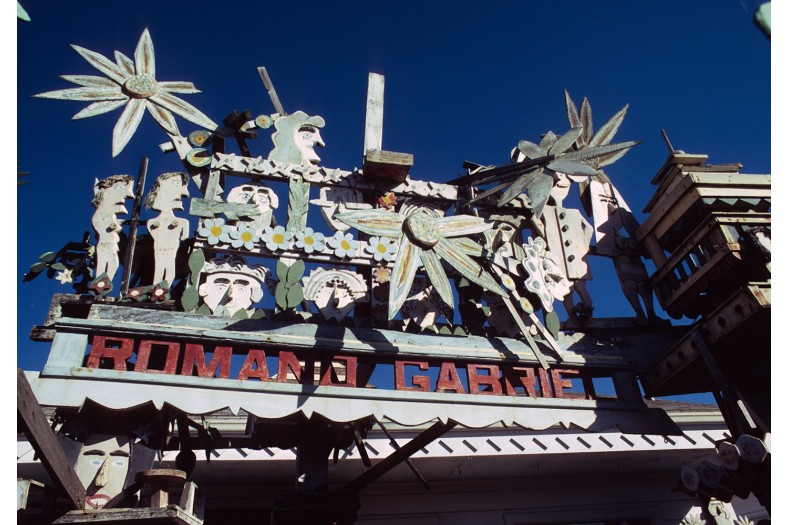 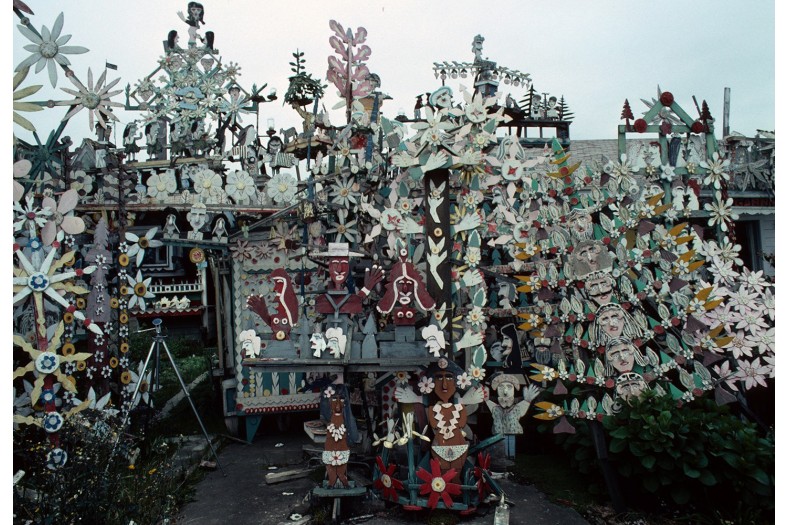 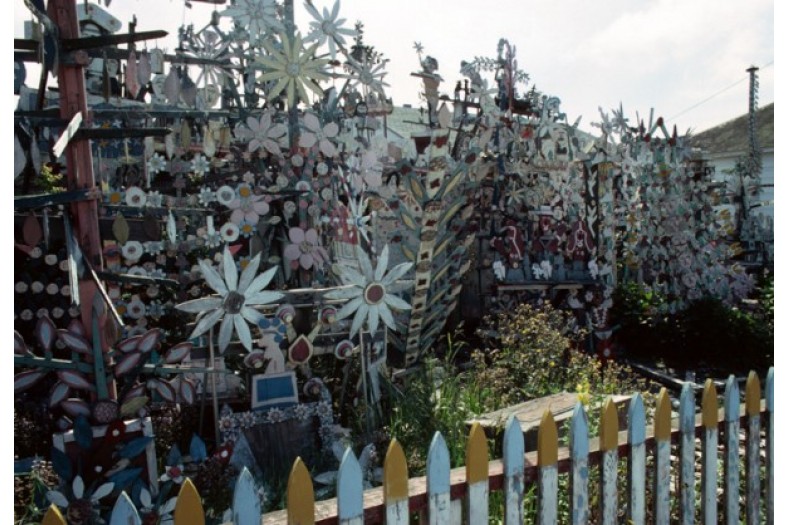 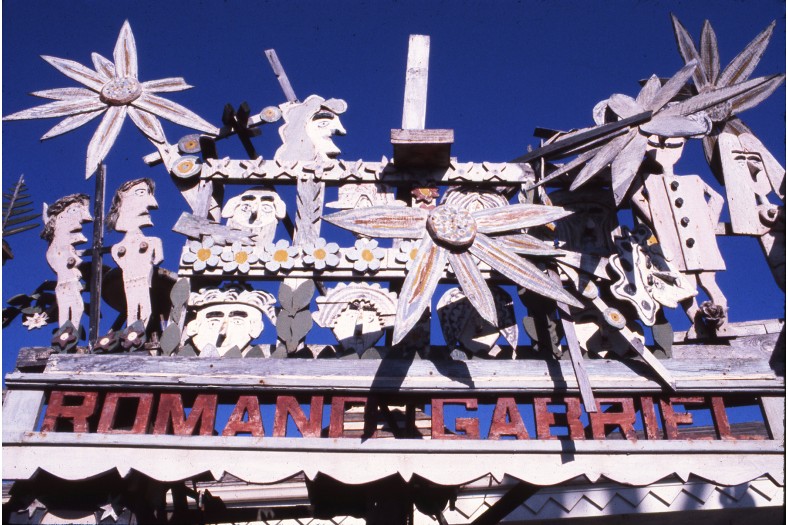 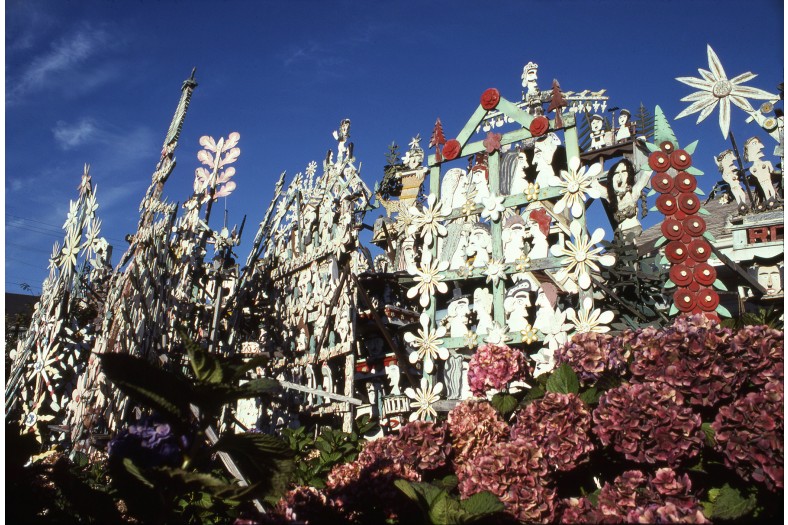 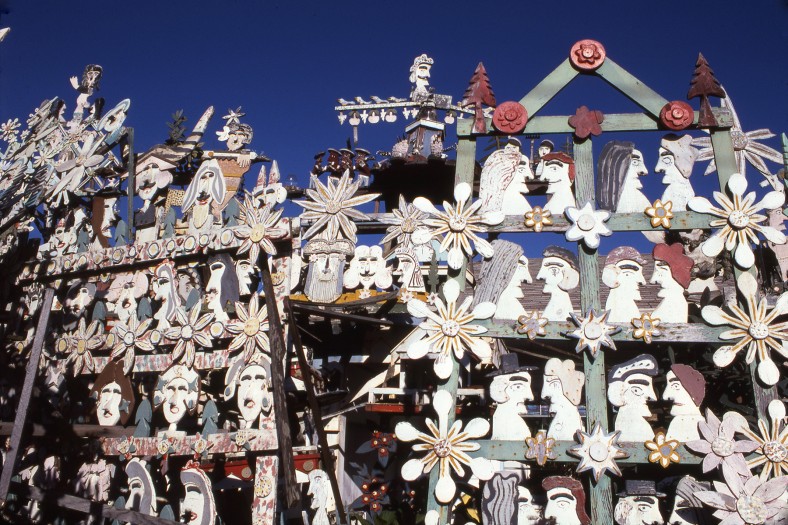 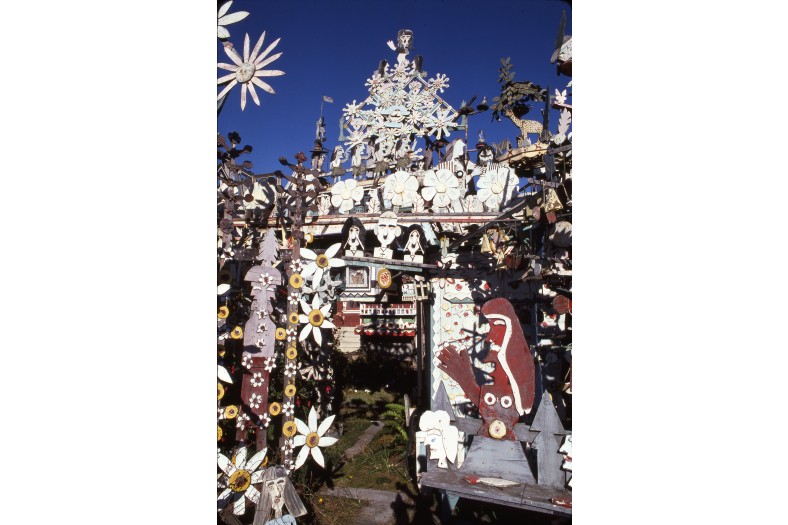 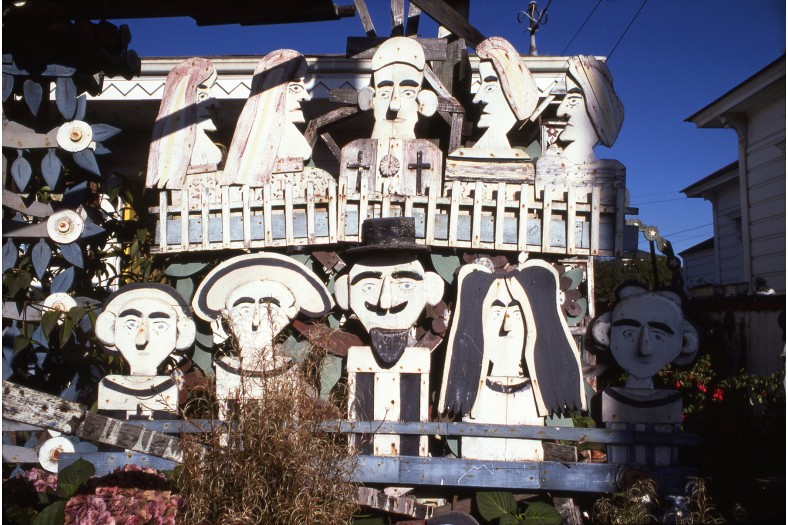 A major portion of Gabriel’s garden was reassembled, and it remains on view in a permanent, public exhibition in the “Old Town” section of Eureka.

Romano Gabriel was born in Mura, Italy. He worked with his father as a furniture maker until 1913, when he immigrated to the United States. After serving in the U.S. Army, he settled in Eureka, California, where he worked in a lumberyard, and as a carpenter and gardener. He also bought land and built houses, selling both for profit.

As he neared retirement in the early 1950s, Gabriel began a garden unlike any other. He complained that Eureka’s climate, with its salt air and overcast skies, was too poor to grow real flowers, so he made flowers out of wood. Over the next quarter century, Gabriel added more flowers and figures to his garden, filling his front yard with carousels, whimsical animals, fantastic trees, Roman soldiers, priests, hula dancers, nurses, sculptures of Italian salami, and caricatures of famous people. He aired his political and anti-papal feelings with signs, written in Italian, and installed figures of the Pope.

At first Gabriel used a handsaw to build the wooden pieces, but he later acquired an electric saw. His built out of scrap lumber and the ends of fruit boxes, and used paint from the dime store. His constructions could be elaborate: he created braces for figures that extended above the roof, allowing them to withstand wind. Other pieces he set in motion, using his own system of motors, belts, and rollers. Despite a reputation as a solitary, he often boarded the tour buses that increasingly journeyed to his house, and he sometimes secretly activated animated components, delighting in the reaction of tourists as his garden began to move.

He predicted his garden would be known all over the world. Unfortunately, by the 1970s, when his art began to appear in books and exhibitions, Gabriel was in a nursing home and was only vaguely aware that his prediction was coming true. He had intended to leave the garden, in its entirety, to the City of Eureka, but when he died without a will, the property was privately acquired and the garden dismantled. After five years of community effort, however, a major portion of Gabriel’s garden was reassembled, and it remains on view in a permanent, public exhibition in the “Old Town” section of Eureka.

The SPACES archive contains figures and flowers from the original garden site, as well as the following: 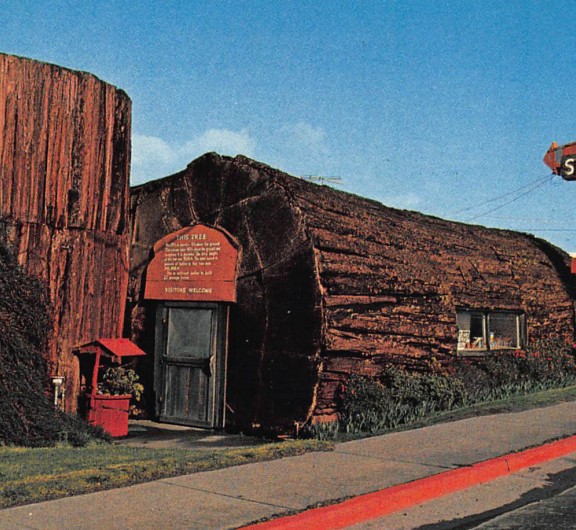 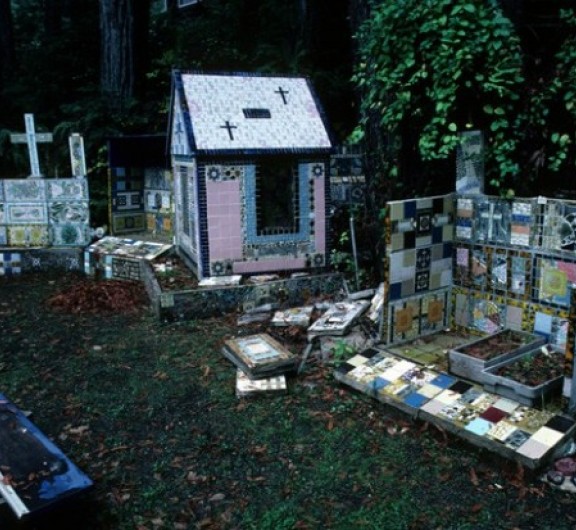 Sculpture with mosaic on top 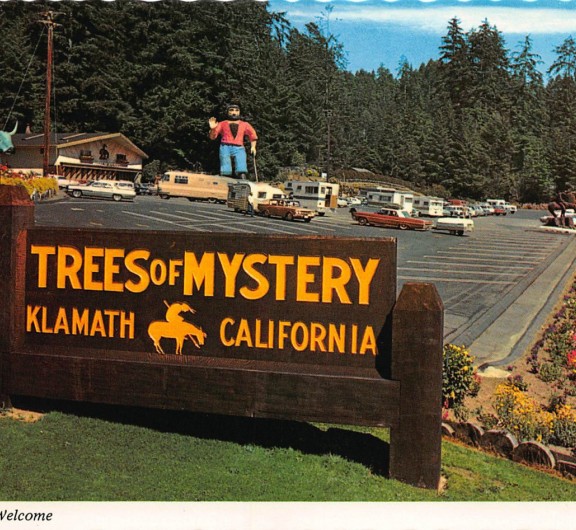 Trees of Mystery (Paul Bunyan and Babe the Blue Ox) 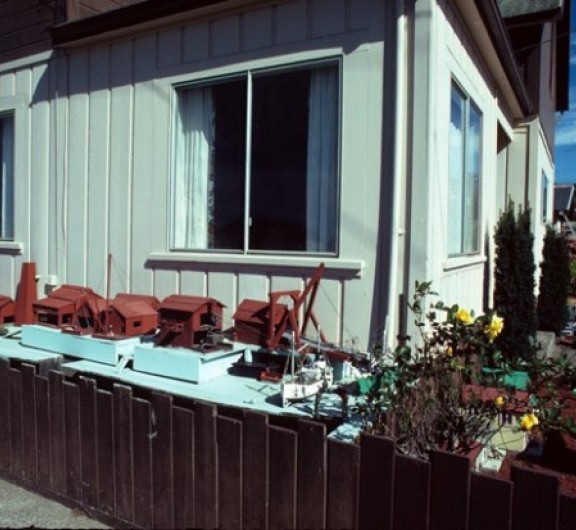 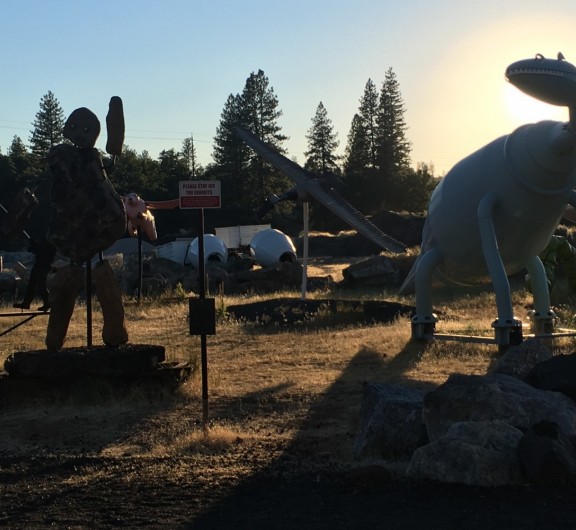