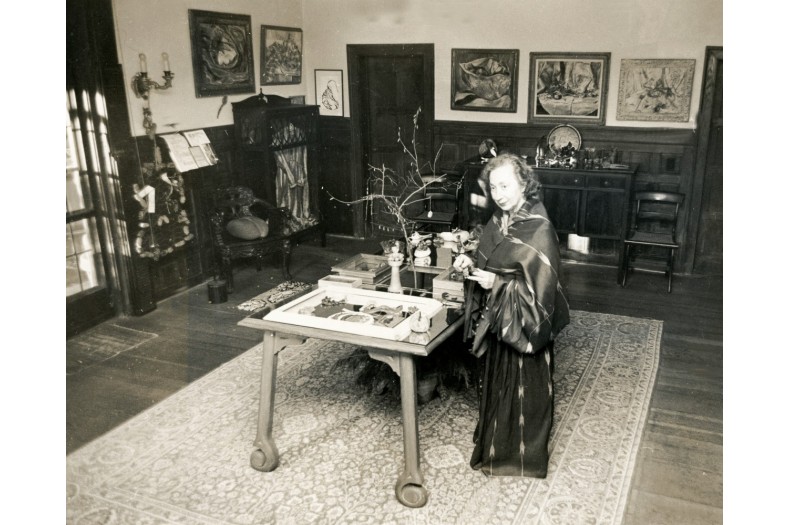 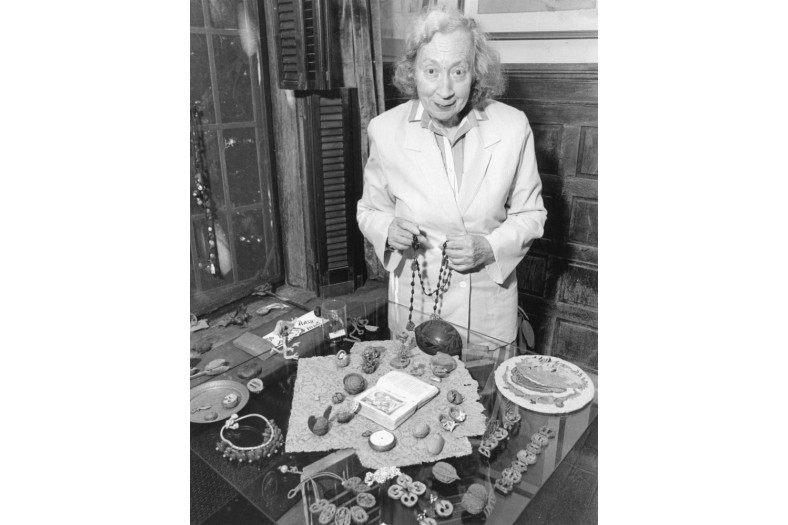 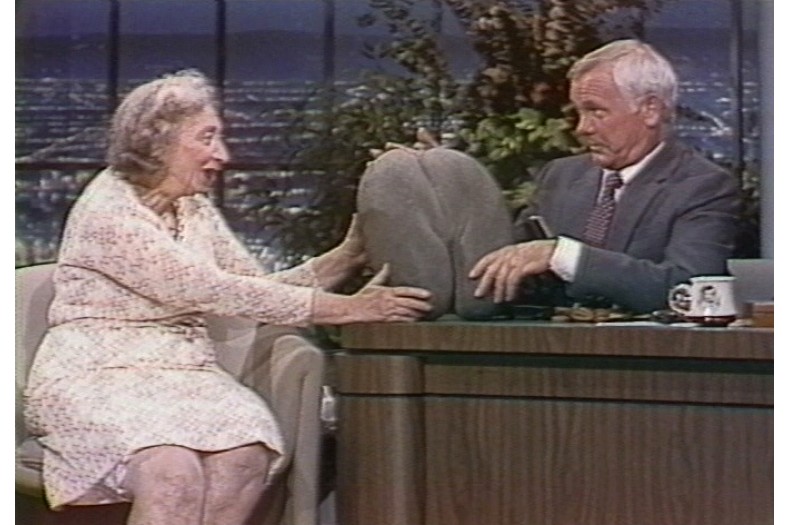 Elizabeth Tashjian shows Johnny Carson a 35lb coco-de-mer from the collections of the Nut Museum, during her first appearance on The Tonight Show in 1981. Image courtesy of Connecticut College. 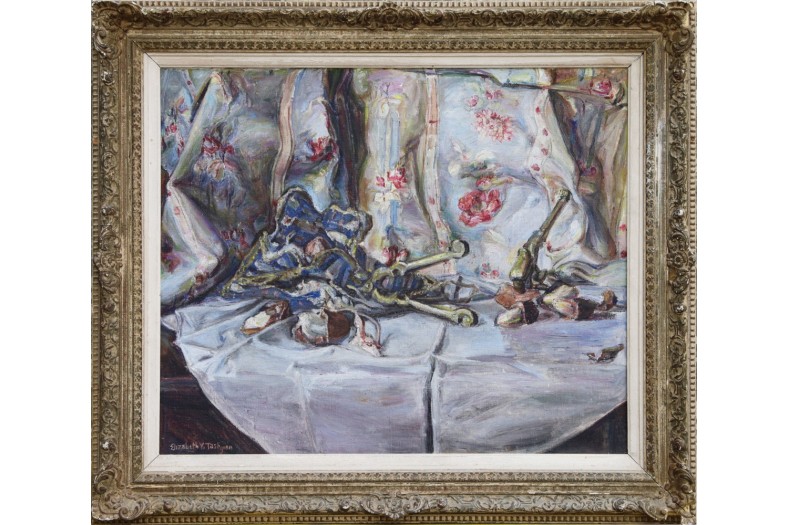 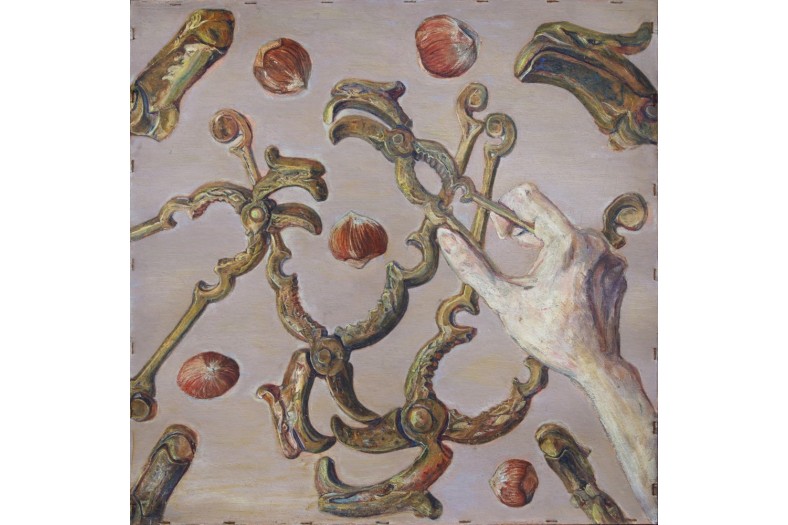 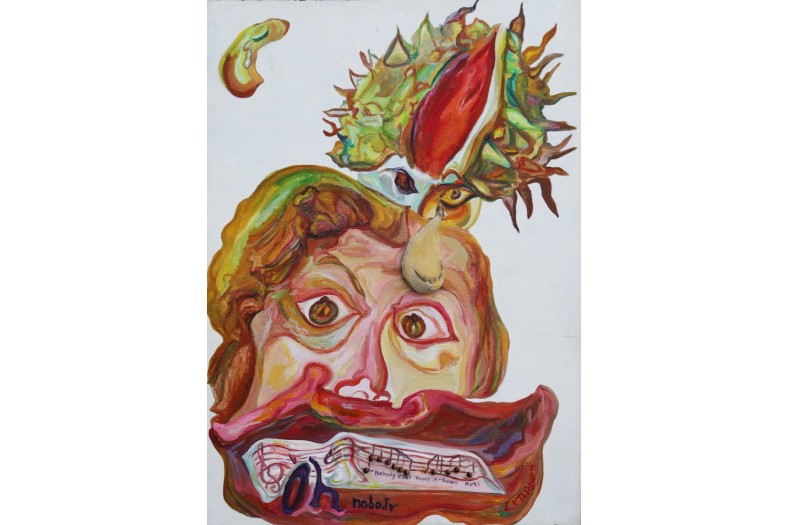 Elizabeth Tashjian, Oh Nobody Ever Thinks About Nuts, acrylic on wood, 1972. Image courtesy of Connecticut College. 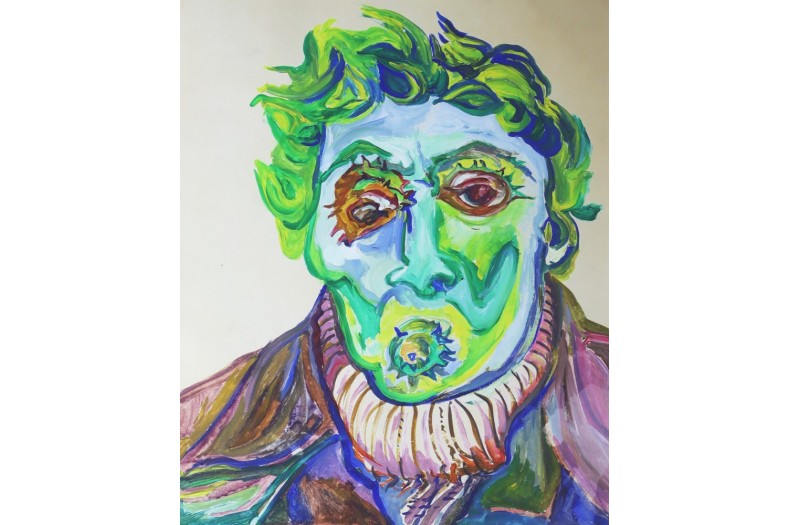 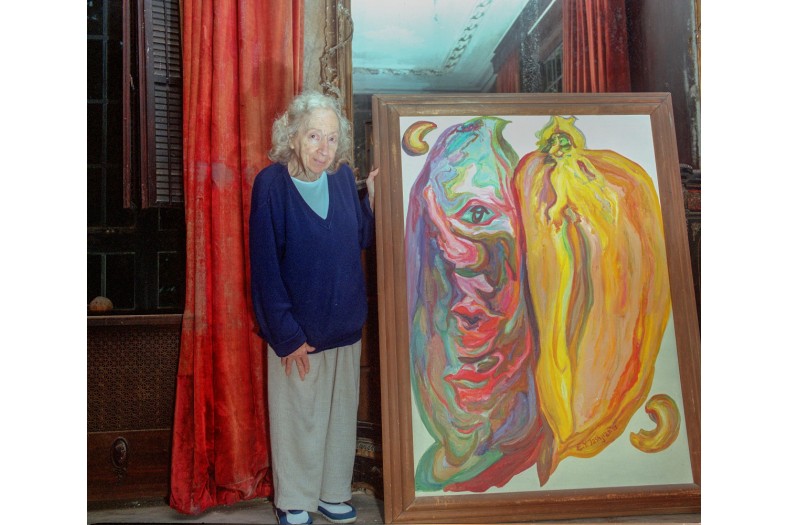 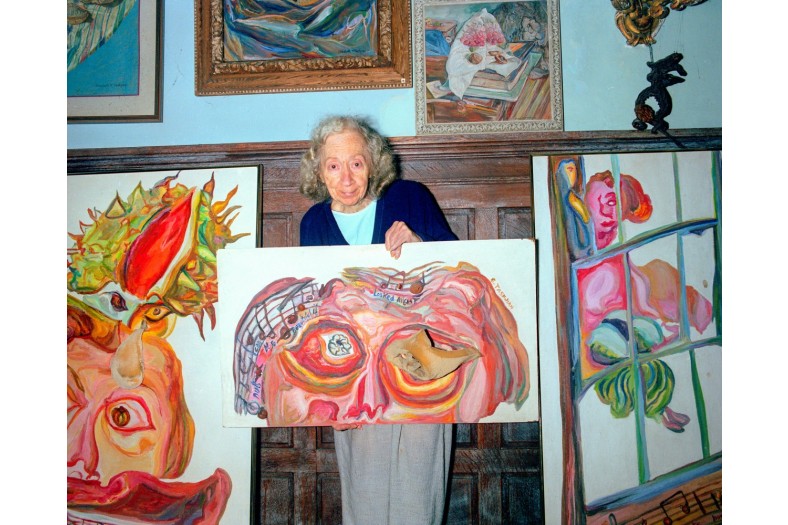 Connecticut College acquired the artwork, ephemera, furniture, and displays from the Nut Museum portion of the house in 2002. It is not currently on display.

Elizabeth Tashjian was born in New York City in 1912 into a family of first-generation Armenian immigrants. At an early age she demonstrated artistic talent, first as a violin virtuoso and then as a painter. In the 1930s Tashjian attended the National Academy of Design, where her artistic interest in painting nuts as a subject began.

In 1950, Tashjian and her mother moved from New York City to a Victorian mansion in Old Lyme, Connecticut. Here, in this small rural town historically associated with the birth of American Impressionism, Tashjian was active in the Lyme Art Association, where she often exhibited her paintings while her mother earned a living as a Christian Science healer.

Following the death of her mother in 1959, Tashjian became a recluse in her home. In April of 1972 Tashjian decided, quite spontaneously, to open her house as a public museum devoted to nuts. In the Nut Museum, she proudly displayed her nut paintings, alongside her collection of nuts, nutcrackers, and nut memorabilia. The museum was originally intended to showcase Tashjian’s perception of herself as a trained artist and painter, however, the museum’s scope and repertoire soon expanded. “As creator and curator of the Nut Museum,” Tashjian said, “I became aware that some people have a load considering themselves to be a ‘nut’. My painting then used the power of art to make social commentary.”

Tashjian’s collection of nuts and nutcrackers continued to grow through the 1970s and 1980s with donations from museum visitors. She appeared twice on The Tonight Show Starring Johnny Carson, as well as on television and radio with, among others, Jay Leno, David Letterman, Howie Mandel, and Howard Stern. By this time Tashjian had successfully transformed herself from a formally trained visual artist into an avant-garde performance artist who appealed to a broad popular audience. Her painting style shifted in later work from a traditional academic approach to a bolder, intuitive artistic sensibility rendered in large scale and bright colors, bearing greater similarity to “visionary” or “outsider” art traditions, particularly in its naïve and spontaneous manner of execution.

The Nut Museum came to Connecticut College in the summer of 2002, when Professor Christopher Steiner petitioned the State of Connecticut to rescue its contents, collections and papers. After being found unconscious (at age 89) in her home in April 2002, Elizabeth Tashjian was taken to a hospital and later transferred to a nursing home. The State of Connecticut took control of Tashjian’s property, ultimately selling her house to cover unpaid taxes and medical expenses. Steiner persuaded the Judge of Probate that the Nut Museum was a collection of great consequence and thus allowed him to remove, before the sale of the home, Tashjian’s art and the museum’s contents. Under Steiner’s stewardship, Connecticut College was entrusted to preserve approximately 150 paintings, 200 drawings, 20 sculptures, 100 boxes of documents and photographs, and all furniture and displays from the museum portion of the house.

The collection continues to be researched, cataloged, and digitized by Professor Steiner, and under his supervision offers students at Connecticut College the unique opportunity to work in a “laboratory” to develop skills archiving and preserving a raw collection of art, ephemera, and associated documentation. As an artistic treasure that might otherwise have been destroyed, the Nut Museum archive also introduces students to the importance of community-based cultural activism as they play a part in the conservation of local history and culture.