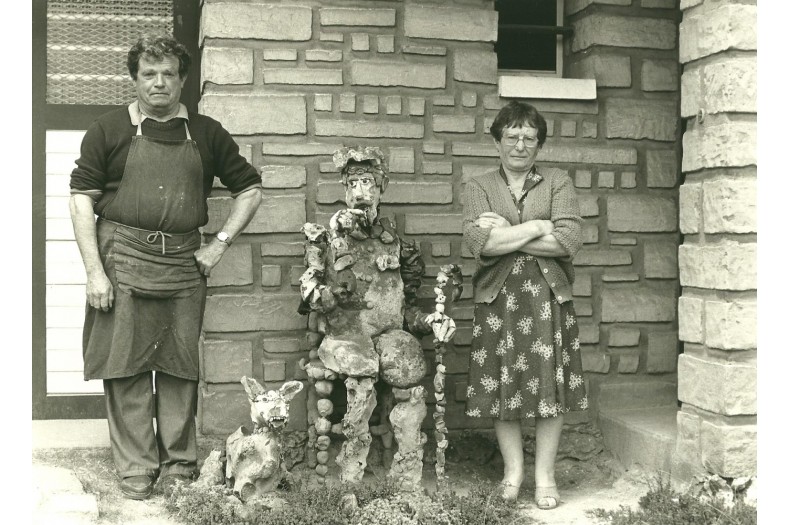 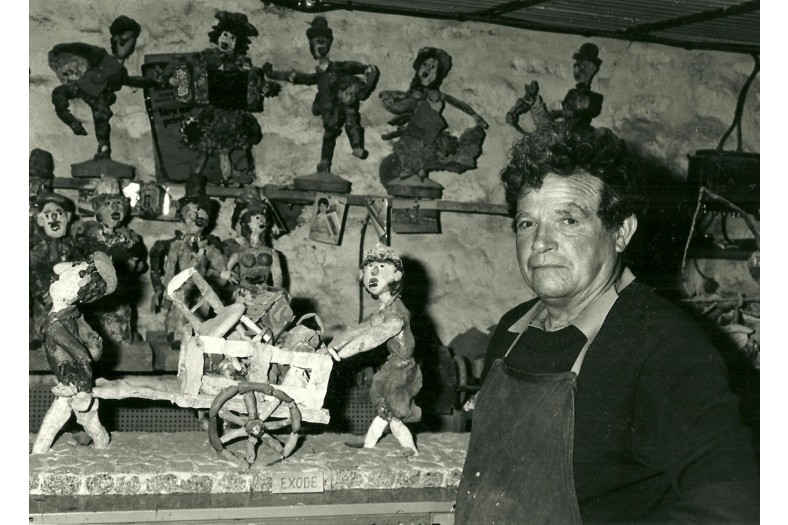 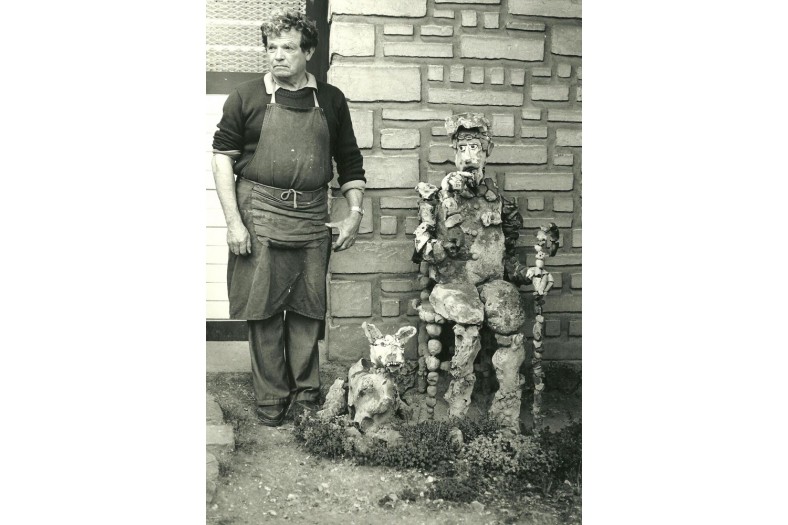 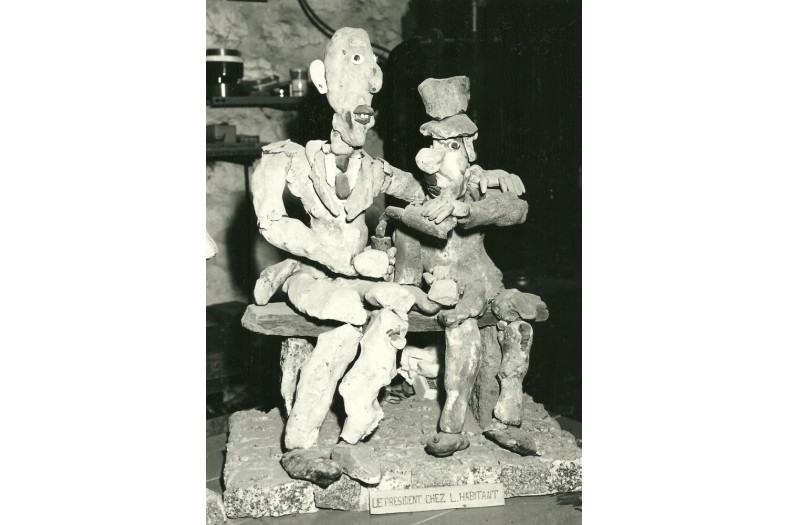 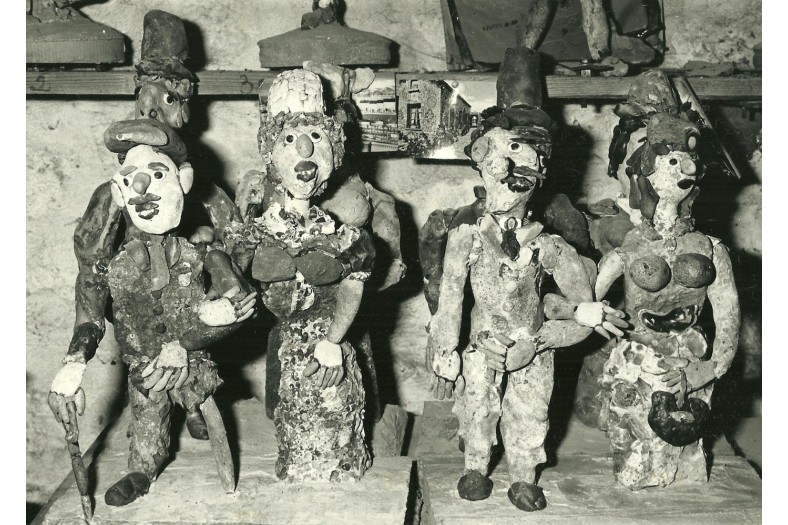 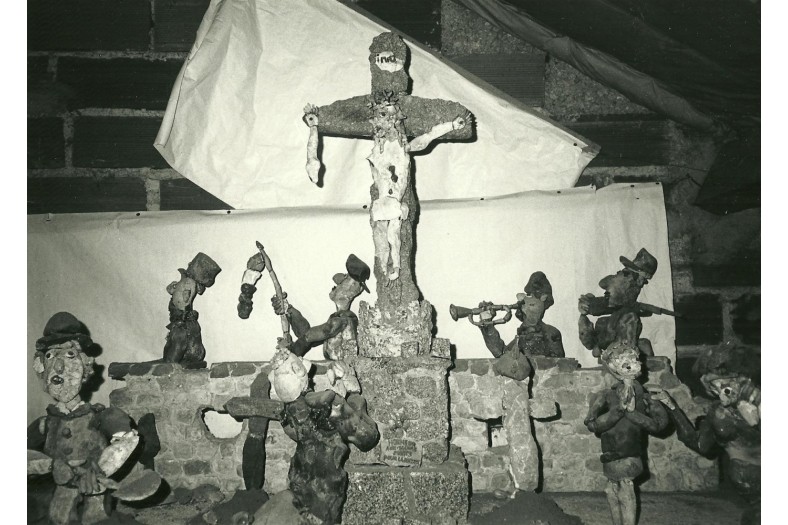 Born in Noirterre (Deux-Sèvres), after finishing his basic schooling Landreau became a baker. He was drafted and after his service in WWII he lived for several years in French Indochine, now Vietnam, where he was particularly taken by the pagodas. Around 1961 he returned to France, settling in Mantes-la-Jolie, where he worked with the French railroads as a foreman shunting freight trains.

In Mantes he purchased a plot of land with a rather steep slope down to the street; there, he built a house and, subsequently, a garden with numerous sculptures. Many of the sculptures featured small figures, most constructed from small pebbles and rocks stacked upon and glued on each other, or linked with an infrastructure of steel wire or pipe. Some of the pieces were automatized by mechanical contraptions made of wire and motors that would make them move or even ring bells. Many were groupings of figures and animals, including an independence day dance (14 July), a boat, a wedding, musicians, parents with their children (including a mother suckling her twins on her bulbous rock breasts), and more. The house itself was sometimes described as a cathedral due to its high gothic-style towers and its placement on the hilltop, and it became common for newlyweds to walk down the steps leading to the street, with the “cathedral” as a backdrop; hence its vernacular name, the Bride’s Garden.

As Landreau aged, he wanted to return to the Deux-Sèvres area of his birthplace, so he sold the property in Mantes toward the end of 1989. Although the new owner had promised to maintain the building and the sculptures, he reneged on his word and the site was demolished. For many years it was assumed that all Landreau’s works had been destroyed, but in 2009 a collection of his smaller sculptures were discovered by antique dealers Fred and Cathy Tavard, who found works that had apparently been safeguarded by the artist himself: he had brought two carts cars full of his sculptures to Deux-Sèvres, but, as some of the more fragile ones did not survive the voyage, he later destroyed them. The others were installed around the garden of his retirement home. Landreau did not create additional sculptures between his move in 1989 and his death in 1992.

This site is no longer extant. 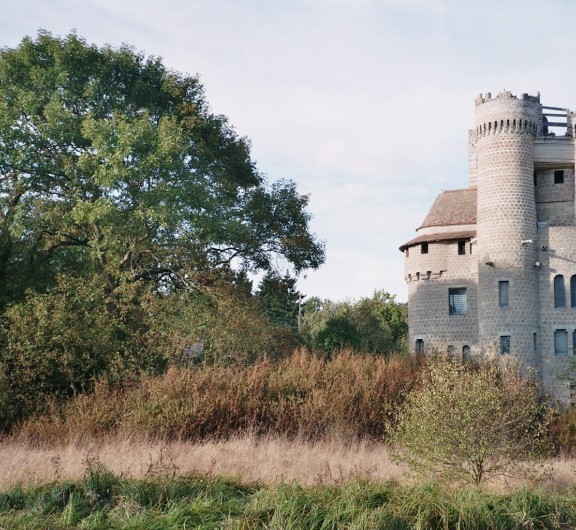