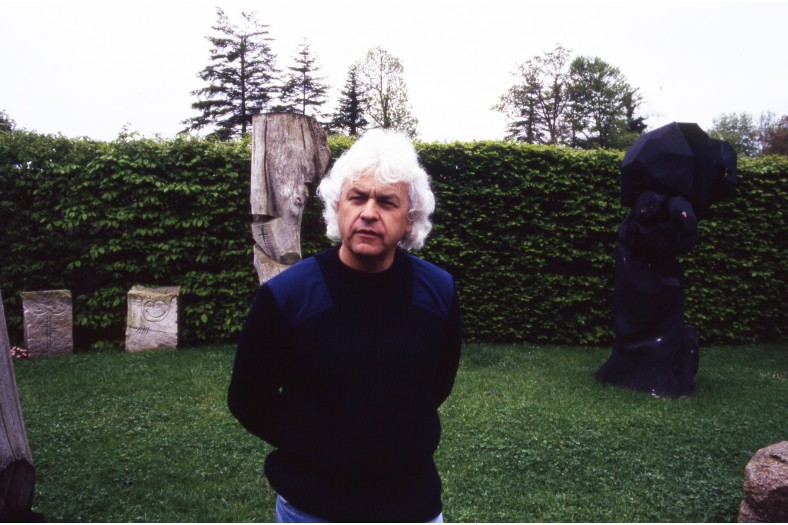 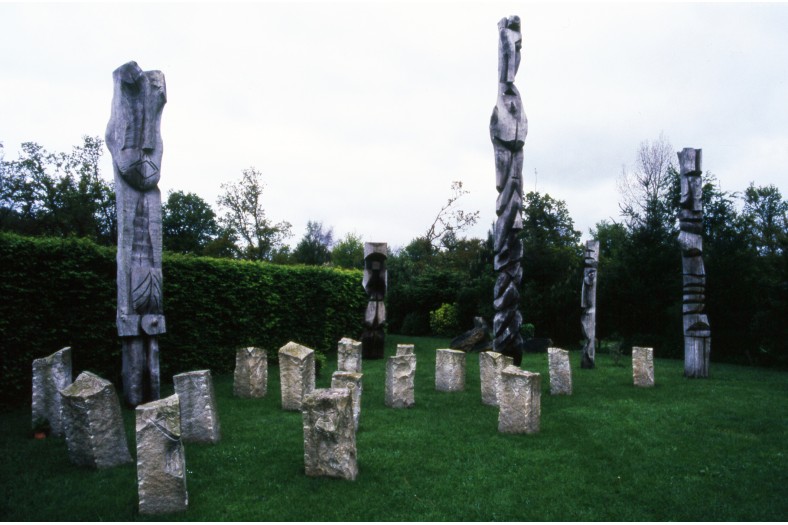 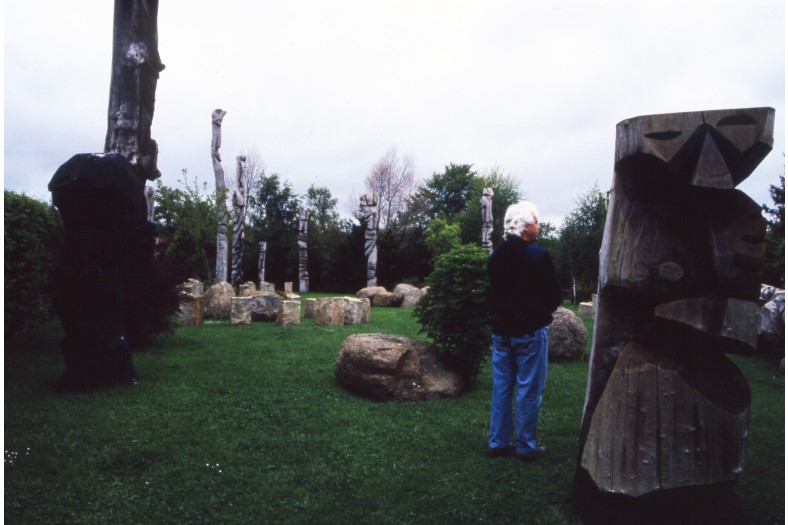 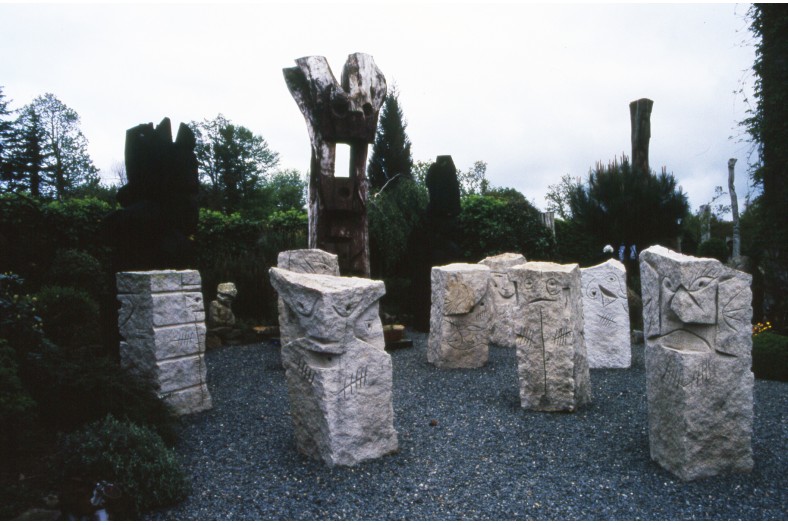 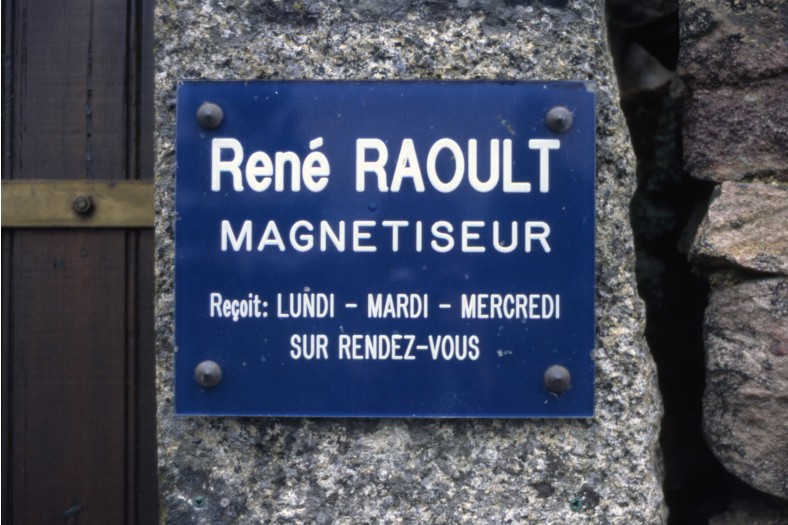 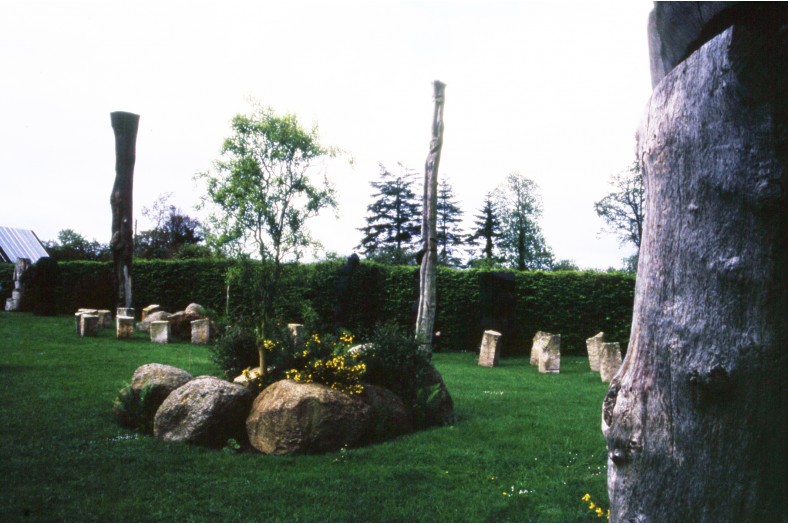 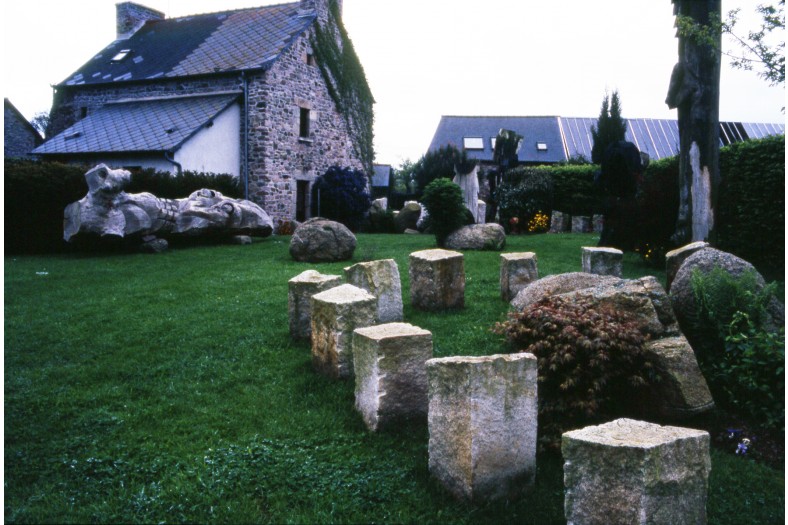 Now known as the Cabanes du Jardin de Pierre (the Cabins of the Stone Garden), it is well-maintained and welcomes visitors; camping is also permitted, for a fee﻿

﻿René Raoult’s church is a church that does not resemble any other. It is a large garden, all green, populated by giant wooden statues that contemplate the world with strength and serenity. They are displayed in an arc, 19 statues, each taller than 6 meters (almost 20 feet), cut with an electric chainsaw out of oak and chestnut trees. Representing the pillar of the church, each carries the name of a Christian or indigenous divinity, as well as Christ, the moon, the holy men, the Mother, the university, the father, the son, the defeated devil, etc.

It is the tall silhouette of Christ that welcomes visitors. It looks at the sunrise and calls the forces of the sky to come and appease the world. Next to it the moon, with eyes half closed, dreams. Further on, the holy men call the forces of the earth so that it shows its hidden treasures. The Mother dominates the church and the sun oversees the relics of the devil that roll at its feet. The features are angular, the looks solemn. Between those wooden divinities a close contact with religious emotion takes place. At the base of these statues lie 18 blocks of granite (completed in 1988), decorated with drawings symbolizing the four elements and engraved with the “inhabitants” of the green church, petrified by the grandiose spectacle of the totem poles. “It would complicate things to add more sculpture,” Raoult commented in 1991.

René Raoult, approximately forty years old at the time of my visit, spoke softly at the base about his church. “Did you have formal training as a sculptor?”

No, none at all. I am a contra person, you know. I was born in a small village. My father was a rag salesman. He used to go to farms and ask for rabbit skins and pieces of metal which he used to resell to larger firms. Life was hard and in the afternoon after school I used to go into the woods.

“What brought you to building this church?”

Each man has a need for a holy place. When I arrived here I understood right away that this old farm with its garden were my sanctuary. On the other hand, I am convinced that a temple, or at least a place of devotion, was once located in this place, perhaps even before the Celts. I came here to give the place new life.

“How did you get started?”

Night and day, I felt totally devoted to my mission to create a spiritual house. I went into the woods all around. One day, I found a chestnut tree lying in the ferns. This was Christ. He was smiling at me. I sculpted it in three days at the home of a friend who was a woodcutter. This was in 1984. After that an inner voice told me to build a green church. I went back into the woods to look at the trees that would become the pillars of the church. It took me nine days, all with an electric chainsaw.

It is the color of grass, the symbol of pure air.

“To whom did you dedicate all these statues?”

To universal intelligence, who smiles, who tells of strength and trust in man who has stayed close to nature and who looks for his immemorial message.

Raoult refers to his Green Church as “an open space for physical and spiritual regeneration,” and while his totems and petroglyphs easily qualify as art, he prefers that his refuge be thought of as a sanctuary. “I never worked as a sculptor, he said.” He quietly explained his iconography and the placement of the sculptures, noting that from ages 5-14 he had a spiritual teacher who inspired him to “see with the hands and touch with the eyes.”

The eagle showed me how to do this in my dreams. This circle represents the inhabitants of the Green Church….When you make a circle, the bad disappears. It’s the same principle that’s involved in the heart, there’s a circulation….

At the time of my visit the local reception of his work was not good, because his neighbors, who are very Catholic, think he is a pagan. Raoult is unfazed: “My religion is very strong,” he said; “I return to the source. In every one of my sculptures there is the hand of God.”

Update: In the early 2010s Raoult sold his property in Pléhédel to Karine and Thierry Raffin and moved to another part of Brittany. The couple were inspired by the site, as Raoult had been, but they proposed changing its character: opening an unusual bed and breakfast hotel, where guests would stay in wooden treehouses perched some their 6-7 meters (20-22 feet) off the ground, surrounded by the giant sculptures. Each cabin is constructed without nails or screws; each is reached by a winding wooden staircase. Now known as the Cabanes du Jardin de Pierre (the Cabins of the Stone Garden), it is well-maintained and welcomes visitors; camping is also permitted, for a fee.

Note: Type “Saint Michel – 22290 Pléhédel” into the GPS rather than the actual address, as the Route de Plouha isn’t currently recognized by GPS systems. This will bring visitors to within 100 meters of the Jardin.