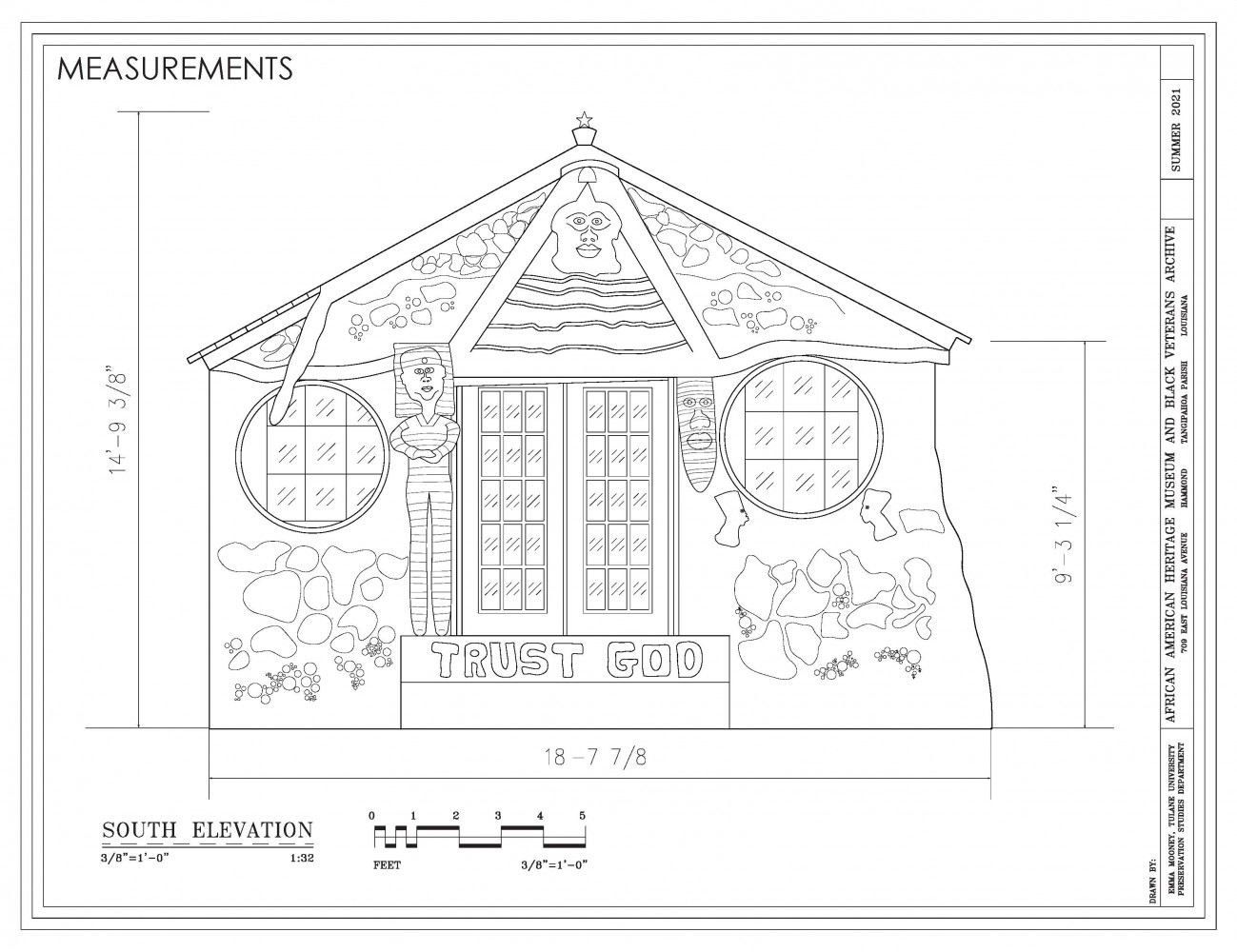 Documentation—the systematic recording of a site’s size, orientation, character-defining features, and overall condition—is arguably the most important element of any preservation project. Particularly if the fate of a site is yet to be determined, having a detailed record of its current state guarantees its preservation, in a way. Whether a site is expected to be preserved in-situ or not, documentation should always be one of the first steps of any attempt in saving or rehabilitating an artist-built environment.

Particularly in a site so dense with sculptures and materials, creating a panoramic photomerge rather than simply taking one photo from afar allows for a clearer view of one particular structure. In this case, stitching together several images taken at closer range in Photoshop (or a similar photo editing software) allows for a more unobstructed view of the elevation of the house that anchors the AAHM & BVA. This type of imagery combined with other types of documentation hopefully allows for a clear record of the site as a whole along with its individual elements. Source: Author.

There are many methods of documentation, some of which have been used for many decades and others that have only recently become popular among students and practitioners of historic preservation/architectural conservation. Likewise, these methods range in specialization, from the more accessible techniques of drawing and photography to the more cost and education-restrictive ones such as 3D digital modeling. The following overview of documentation techniques is not an all-inclusive list, but rather a preliminary guide to the range of technologies that might be implemented during the documentation of an artist-built environment. These reflections are specifically based on my experiences documenting the African American Heritage Museum & Black Veterans Archive, Hammond (AAHM&BVA), Dr. Charles Smith’s artist-built environment in Louisiana.

This document will briefly describe the following documentation techniques:

A simple yet invaluable form of documentation is high quality photography that captures the site from as many perspectives as possible. For building elevations or significant sculptures or landscapes that may not fit into one frame, take several photographs from a consistent, close distance, moving from one side to the other. These images can be stitched together and rectified in photo editing software for effective panoramic imagery.

And though it is true that the more detailed documentation, the better, it is also smart to have broader images that show as much of the site at one time as possible. These images will help to quickly communicate the character and condition of the site to an individual or organization for the first time. Likewise, State Historic Preservation Offices and the National Park Service (NPS) often only allow for a limited number of photographs in their cultural resource inventories or in a National Register of Historic Places application. In the case of a four-sided structure, taking a photograph in three-quarter view from two opposite corners captures all four sides in just two photographs. Please refer to your state’s and the NPS’s specific guidelines for further information.

Likewise, drone photography is becoming an increasingly common form of documentary and promotional imagery, frequently used in the real estate industry. In the field of historic preservation, it can quite literally provide new perspectives of a site. Videography from a drone can also provide valuable media for promotional, fundraising, and advocacy purposes. Drone operators must have received a license from the Federal Aviation Administration (FAA).

The two photographs above were chosen for the Louisiana State Historic Preservation Office’s Historic Resource Inventory/ Historic Standing Structure Survey, for which only two photographs are necessary. They would also be appropriate to use for a National Register of Historic Places application. In this case, the rear elevation alone was chosen based on the physical inaccessibility of certain vantage points and because the sculptures in this area provide important context. Ideally, it would be replaced with a photograph that shows both this rear elevation and the other side elevation. Source: Author. 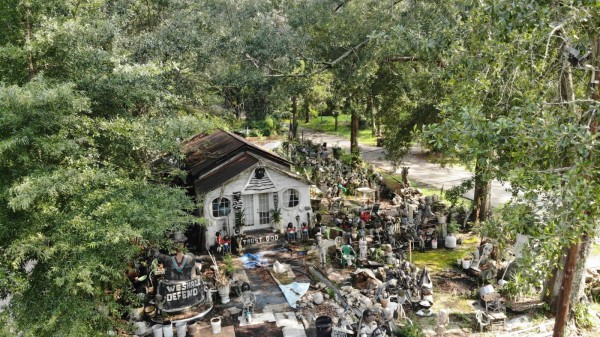 Despite tree coverage preventing access to certain vantage points by a drone camera, in the case of the AAHM & BVA, this vegetation reflects the topography of the region and the character of the neighborhood in which the site exists. Likewise, the image above nicely illustrates the way that the site suddenly reveals itself within the forested street. Source: Nicholas Licausi. 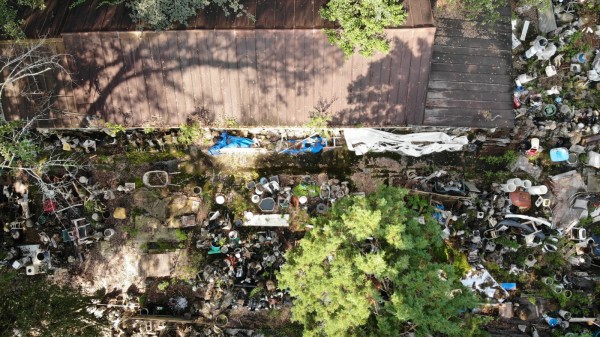 Drone photography from directly above can be more difficult for a site with tree coverage, but images can still be successfully captured from a shorter range. Source: Nicholas Licausi.

To attain more detailed measurements and specifications about a site, particularly if it includes (or is housed within) an architectural element such as a house or barn, measured drawings can be created. If architectural knowledge is present or accessible, then certainly keeping a drawing neat and to scale is helpful. However, any sketch that includes a few primary measurements will be valuable for future research, scholarship, and preservation planning. Likewise, the quality of an impromptu sketch can express the spirit of a place in a way that rigid, scaled drawings sometimes cannot. 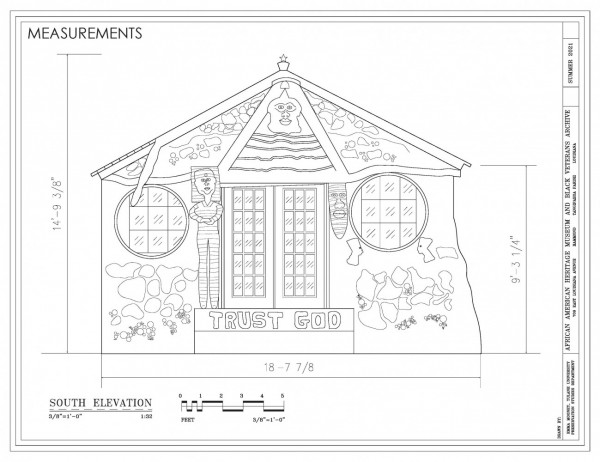 The drawing above was created first by sketching the front elevation of the building and recording measurements (using a conventional measuring tape as well as a laser measuring tool). It was then drawn to scale, digitally, in AutoCAD, a program often used by architects, engineers, and designers. However, Adobe Illustrator or other, less specialized drawing softwares could be used. Source: Author.

A site plan is another crucial, but not necessarily complicated, piece of the documentation puzzle. The goal of a site plan is to help orient the artist-built environment to its immediate surroundings as well as to orient its elements to eachother. Just like measured drawings, this can be done both digitally or by hand, depending on the goals and audience.

Depending on the site at hand, there may be smaller, sculptural elements scattered throughout the property/landscape. Particularly if these elements are unable to be sufficiently captured by overall site photography or 3D digital modeling, it is important to generally document the orientation of each element in a site plan. In such a case, one can divide the site into several sections and use these sections to plan the execution and illustration of the site’s survey, as explained in the next section. 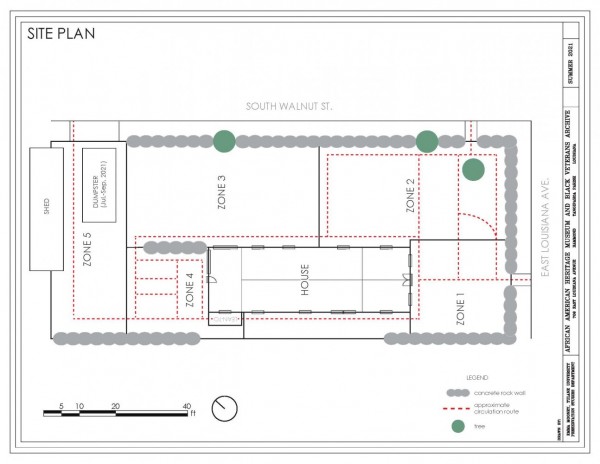 A survey or inventory is the systematic process of collecting data about a set of historic resources. In the case of an art environment made up of many individual elements, a survey can be designed so that none of these elements are excluded from the greater documentation effort. A survey can be as broad or narrow as you’d like, depending on the desired detail and the available time and resources. At the very least, each element should be photographed and located

within the site plan. If time allows, other details might be collected such as measurements, condition issues, materials used, and so on. The type of information collected should directly correspond to the site’s long-term goals and should be determined mindfully. If the environment is large enough to warrant it, collecting GIS coordinates while you survey may also benefit potential end-products.

In the case of the AAHM & BVA, I created a Google web form that could be accessed on a phone, tablet, or computer while on-site. The form included fields for me to input data about each object’s location, materials, colors, condition, and so on while on site. Once I submitted this information through the web form, it would automatically be added to a corresponding Google worksheet. At this point in the process, each object was photographed individually.

A survey’s scope and methodology should account for the unique circumstances and characteristics of the site in question. Once again, the most important thing to establish when planning a survey are the types of data collection that will serve the site’s long term goals. 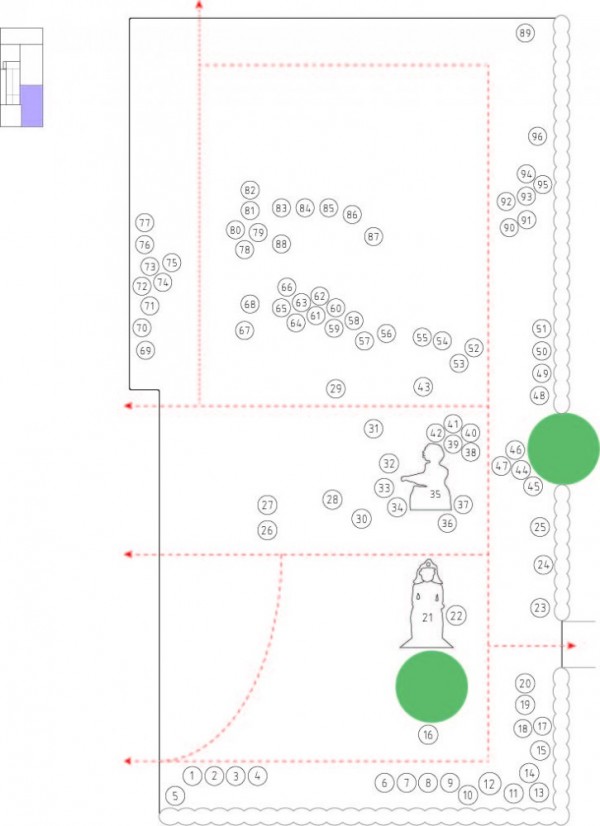 New technologies in the world of 3D digital modeling have allowed for more sophisticated ways of documenting the built environment. The following softwares and technologies offer the chance to go above and beyond the typical documentation strategies, but they admittedly cost restrictive and not easily accessible. If given the chance, however, 3D digital modeling can open doors to drastically new ways of engaging with and documenting an artist-built environment. This brief introduction to digital modeling will compare the two general concepts of laser scanning and photogrammetry.

Despite their drastic differences in accessibility and sophistication, laser scanning and the more manual process of photogrammetry are still grounded in the same principles of stitching together imagery from multiple angles to create a 3-dimensional model. The primary difference between these technologies is that the former uses detailed point cloud data and the latter uses more conventional photography. 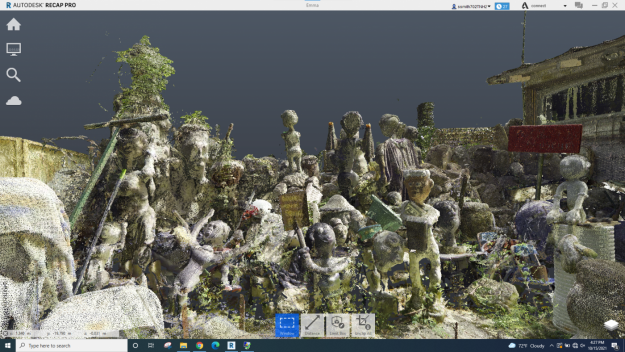 The inclusion of 3D modeling technologies in a project will depend on access, usually dictated by price. Laser scanners from companies like Leica and Faro not only cost upwards of $100,000 just to acquire them, but also necessitate access to, and knowledge of, complementary software such as SCENE, ReCap, and Revit. Of course, the benefit of these products and programs is that they can produce the highest resolution scans, accurately re-creating all details of a site or structure. Likewise, when brought into other architectural drafting programs such as Recap and Revit, these programs are intuitive enough to recognize the measurements of a site and help produce 2-dimensional measured drawings that override any human error. Programs like Matterport and Reality Capture offer the chance for 3-D modeling without the same high prices and specialty knowledge, as they can be accessed using any point and shoot or phone camera. Though these programs are limited to only partially-explorable end products in the case of Matterport (an online viewer can jump from one 360 view to another, rather than “walking” around freely) or lower resolution in the case of Reality Capture, they still offer the opportunity to experiment with 3D modeling and virtual reality that can be used for educational programing, digital interpretation, promotion, and planning.

The concept of documentation, digital or otherwise, includes a wide variety of techniques and approaches. Any documentation is better than no documentation. Basic photography and drawings will always be of value, nomatter the budget of the project or the expertise of its stakeholders. If, however, a project does have access to greater resources, digital documentation opens up greater possibilities for how a site can be preserved, both physically and in memory.

Emma Mooney is an art and architectural historian currently working at the NYC Landmarks Preservation Commission. She first realized her interest in the built environment during an internship with the John Michael Kohler Arts Center in 2014. She holds a Master of Science in Historic Preservation from Tulane University. While living in Louisiana, she researched art environments such as Clementine Hunter’s African House Murals and Dr. Charles Smith's African American Heritage Museum and Black Veterans Archive. Before becoming involved in historic preservation, she worked in museum collections management, most recently at the Cooper Hewitt, Smithsonian Design Museum and the American Folk Art Museum.