In 2000, on his way from Illinois to New Orleans, Dr. Charles Smith stopped in Hammond, Louisiana to grab a bite to eat. Wandering through town he discovered this historical marker under a mammoth live oak, and the monument below.

Incensed by the heartlessness and anonymity of “favorite slave boy” presented as legitimate history, he vowed on the spot to fight back. But this is not a man to write a letter to the mayor. Dr. Smith bought a house and yard in Hammond and dove into work on his second African American Heritage Museum and Black Veterans Archive (AAHM&BBVA). His first was in Aurora, Illinois (see the SPACES entry on this site.)

In January 2013 Don Howlett and I left the pre-Mardi Gras, pre-Super Bowl buzz brewing in New Orleans and drove across the Lake Pontchartrain causeway to Hammond. The Doctor was in. A day with Dr. Smith is like being hit by a force of nature and culture combined. Steeped in Baptist/Gospel traditions he explodes into brilliant, extemporaneous oration, backed up by the ocean of sculptures, bunker-like fixed monuments, and arrangements of found and created objects that illustrate his invectives. 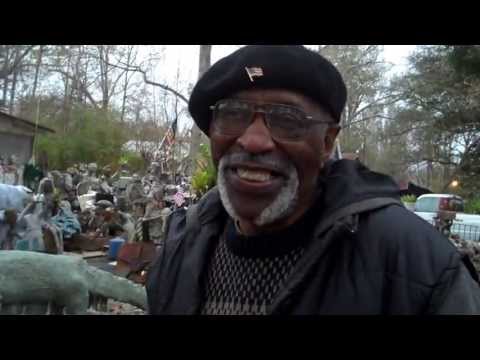 The elements of his environment––the house, fixed features, and sculptures are in continual flux, and their meanings are mutable as well. This is not to suggest that his work is superficial or equivocal––his messages are powerfully consistent, addressing the entire African American experience, from the diaspora to contemporary events, as a real and visceral history that demands expression

A concrete slab over a culvert serves as a bridge from the conventional world to the visually and emotionally charged realm of the AAHM&BVA. One is greeted by a monumental self-portrait bust of Dr. Smith as a proud Marine draped in black, green, and red––colors of the Pan-African flag.

The yard is covered with sections of carpet and other materials, creating pathways through the ever-changing arrangements of many hundreds of figural sculptures and other forms. Still in the “front yard,” we encountered a poignant cluster of child figures in progress, Dr. Smith’s homage to the Sandy Hook school massacre in Connecticut.
Dr. Smith responds to current events immediately, mainly memorializing horrors as they occur, but also the heroes and heroines who make history.

Dr. Smith perceives humanity not as a monolithic abstraction, but as an ocean of individual people, each and every one impacted by history. One wanders through the site knee-deep in his powerfully expressive figures, with occasional life-sized or larger-than-life figures standing out. The smaller figures bring to mind two racist stereotypes from American material culture that are also about knee-high: the step-‘n-fetchit or jockey yard ornament, and the “silent butler” smoking stands. Both represent silent, obedient subservience, and their reduced scale emphasizes their inhumanely reduced stature. Dr. Smith’s figures are complex and filled with seeming contradictions, on one hand referencing racist traditions while, on the other, presenting poignant, respectful representations of individuals, in his ongoing project to conflate past historical notions with his personalized revisions. His sculptures raise more questions than they answer.

A few leitmotifs stand out in the hundreds of sculptures in the AAHM&BVA. There are dozens and dozens of serving figures holding trays. The gesture strongly conveys humble generosity, but the history of forced servitude is embedded within them as well. Sculptures of angry beasts, embodiments of rage, recur throughout.

The site is punctuated with American flags of all sizes, many of which are store-bought cloth flags waving in the breezes. These are not symbols of passive patriotism; they convey Dr. Smith’s powerful sense of owning the flag of the country he served in military combat, and serves as an artist today.

Dr. Smith creates sculptures out of everything at hand. Armatures are made of tree limbs and sticks, dimensional lumber scraps, metal, or discarded objects, then all generally covered with a mixture of plaster and cement, and often incorporating manufactured objects to give them a narrative purpose or identity. When the forms are completed he coats them with thick coats of paint. The sculptures then begin their process of “weatherization.” His Hammond yard is filled with sculptures in various states of being weatherized. Figures made in the early years of his tenure here are poignantly decayed, and others are fresher. Some are covered with plastic bags, so he has a ready supply of works for museum and gallery exhibitions, or for sale to collectors who prefer less weatherized works.

After spending much of the day with Charles and his longtime companion Mary Golden, we all went to have a meal at Don’s, a local fish restaurant. I’ve known Dr. Smith since the mid-1990s and am well aware of the blistering dissatisfaction he’s felt from many sources: the City of Aurora, African-American leadership in America, and elected officials on every level, to name just a few. Driving back from the restaurant we passed a curious site: a brand new building sporting a flashy sign, African American Heritage Museum. It turns out that supposed supporters of his project absconded with the name only, creating a safe and conventional venue to celebrate their version of African American heritage, in their safe and conventional version of a museum. Once again, Dr. Smith’s visceral work and his powerful message have been sidelined by the powers that be.

Back at his African American Heritage Museum and Black Veterans Archive, Dr. Smith shared something extraordinary: he said that he’s truly content. He’s reached a point his life where it’s no longer necessary to fight unwinnable battles. He’s happy to do his work. Yet the pain is still ever present. In a talk to an art history class at the School of the Art Institute of Chicago in spring 2012, he explained that the only way he can deal with the horror of having killed innocent people in the course of his service as a Marine in the Vietnam war, is to focus the negative energy into creative energy, 24/7.

One can’t step into the same African American Heritage Museum and Black Veterans Archive twice—it’s a life/work in progress by an artist of extraordinary powers. It’s continually in the process of being built and of weatherizing. If Dr. Smith is present, visitors experience an original, command performance.