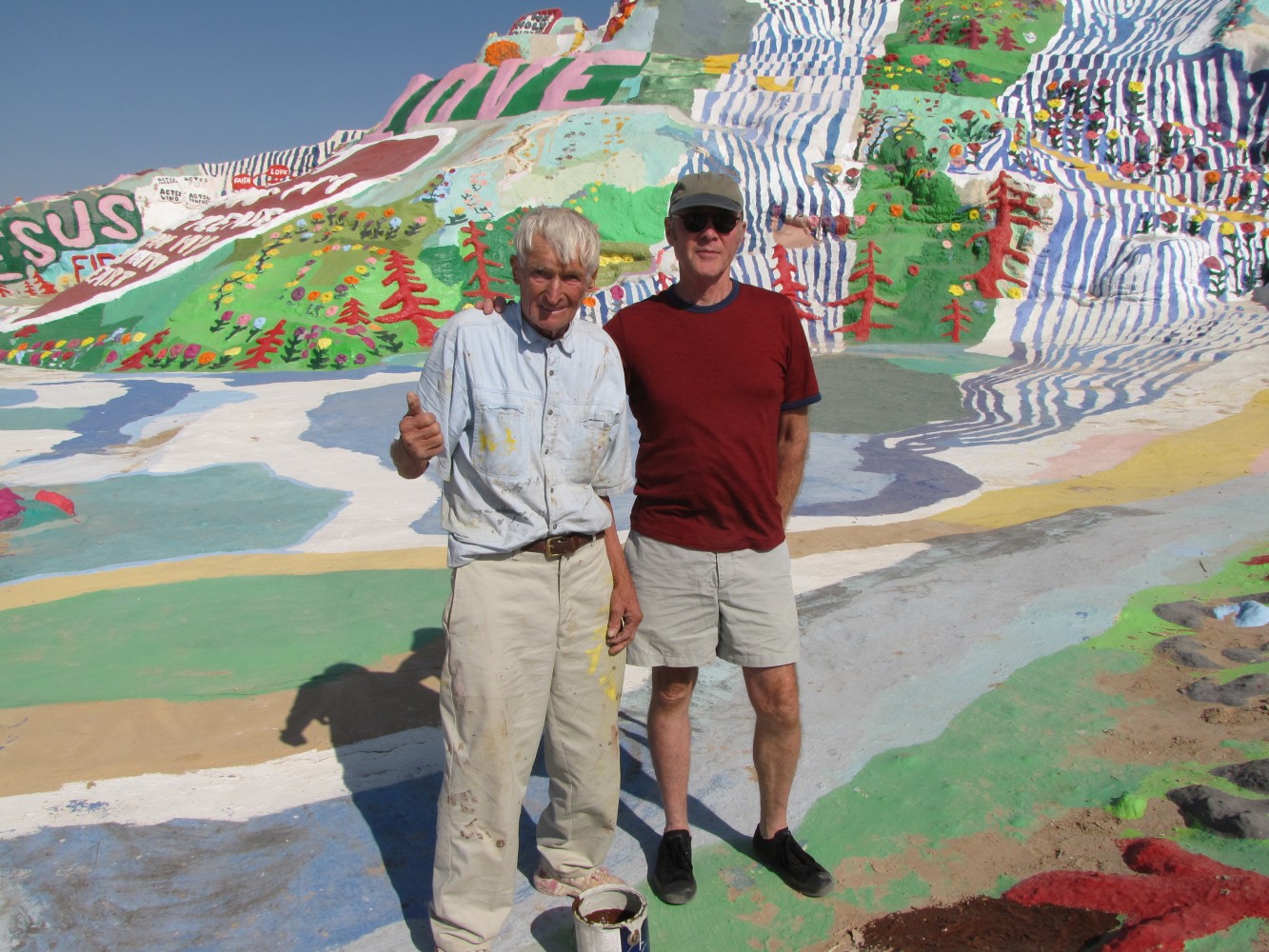 Gregg Blasdel is an artist, curator, and educator. His seminal Art in America article “The Grass Roots Artist” introduced a broad arts audience to artist-built environments in 1968. His curatorial work includes Naives and Visionaries at the Walker Art Center in Minneapolis in 1974, and his photography has been featured in numerous publications, including Fantastic Architecture and Eccentric Visions (1980) and Jesse Howard and Roger Brown; Now Read On (2006).

Blasdel received his BFA in painting from the University of Kansas and his MFA in sculpture and painting from Cornell University. His work has been exhibited in New York and throughout New England. He is a Professor Emeritus at Saint Michael’s College in Colchester, Vermont. Blasdel lives and works as a printmaker in Burlington, Vermont, and continues to travel and document the work of self-taught artists. In 2018 and 2020, Gregg Blasdel made significant contributions to the SPACES Archives by donating his photography collection and archives resulting from his longstanding commitment to the study of art environments. You can see more about those collections here. 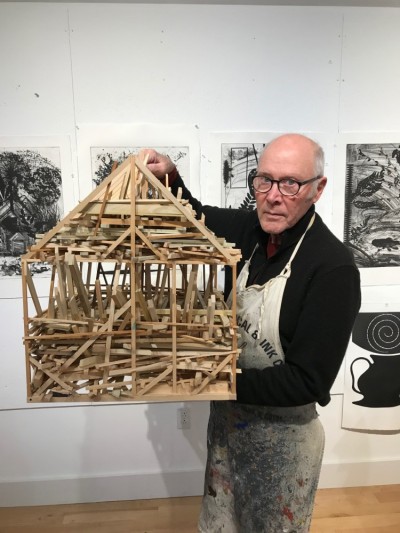 Gregg Blasdel with "Devil's House," a work in progress

As a young boy growing up in Belle Plaine, Kansas my first experience with a self-taught artist was with the work of David Rousseau. He had constructed a small, multi-colored concrete, futuristic looking village over a concrete fish pond in his front yard and populated it with toy cars and small figures. At the time I did not identify it as the work of a self-taught artist but it fascinated me and I visited often.

In 1959, I enrolled at the University of Kansas as an art major. In 1961, I met a fellow art student, Ray Wilber, who two years later in the summer of 1963 would take a trip to Lucas, Kansas, to visit S.P. Dinsmoor’s Garden of Eden. While driving through rural Russell County on his way to the Garden of Eden, Ray came upon the entrance of the lane to Ed Root’s concrete sculpture near Wilson, Kansas. In the fall of 1963, we traveled together to document S. P. Dinsmoor’s concrete Garden of Eden and Ed Roots amazing farmyard filled with concrete and mosaic sculpture. On that same trip, we also discovered Florence Deeble’s concrete sculpture across the street from Dinsmoor’s garden. In many ways, this trip marked the beginning of recognition of a group of artists who had worked in obscurity and out of sight to a broader public audience. I was overwhelmed by the energy and vision of these artists. They inspired me to seek out and document the work of other self-taught artists. I have continued my research to the present day, and I still find it remarkably exciting. 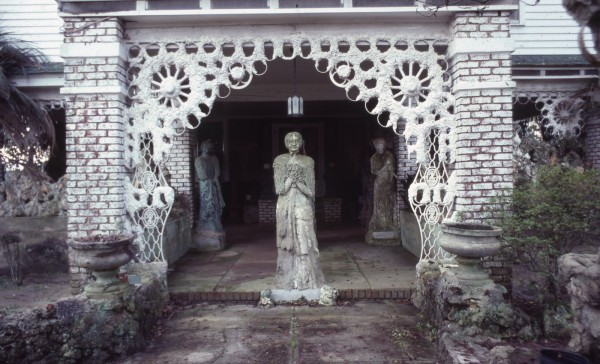 You’ve visited hundreds of art environments throughout the years. Do you have any favorites?

Clarence Schmidt’s House of Mirrors was my favorite site to visit. I spent four years documenting Schmidt’s environment and, in the process, got to know him as a personality and an artist. Schmidt identified as an artist and was acutely aware of his circumstances and the impact that his work had on others. He often spoke of his work and its content with references to current art trends: “I’m the first Pop artist.” He was a tireless worker but would occasionally pause to sing a song or talk about his work and his vision for future work. Throughout my time visiting Woodstock, I witnessed Schmidt creating his own myth. He knew that his creation was in his words, “the eighth wonder of the world.” 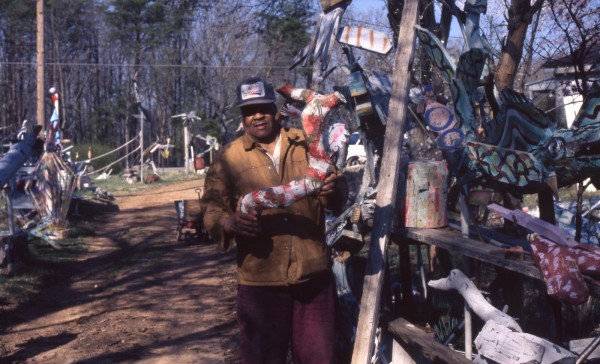 Robert Howell and his yard show. Photo by Gregg Blasdel.

Tell us more about your curatorial practice. What was your experience as one of the first curators to present work by art environment builders?

When I wrote my first article “The Grassroots Artists” for Art in America magazine in 1968, I was excited about the possibility of this exposure creating a broad interest in the work of self-taught artists. To my knowledge at the time, there had been little if any recognition of large art environments created entirely outside of an established art venue. During the same time as the article publication, I had become aware of a parallel art in Europe called Art Brut. The work of self-taught artists in Europe was championed by the French artist Jean Dubuffet and had been collected and displayed in galleries along with the works of established artists. I was encouraged by the work of the European artists as well as new sites in the US and continued my research. With more individuals becoming involved in the research and documentation of this work, increased visibility came about through the publication of numerous magazine articles and books.  Another important event was the groundbreaking exhibition Naives and Visionaries at the Walker Art Center in 1974. The publication of the catalog and the exhibition exposed this work to a much wider audience. Currently, it is safe to say that the work of unschooled/self-taught artists has entered into the arena of contemporary cultural art. 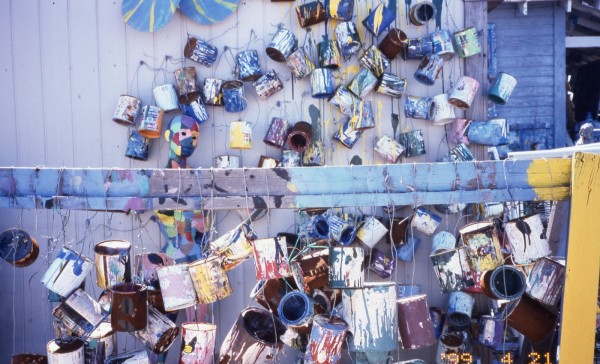 How has the field changed since you first began documenting art environments? What are your hopes for the field going forward?

In my Art in America article, I stated “The Grass-roots artist is a phenomenon of a particular economic and social situation in time that is rapidly approaching its close.” I had based that statement on the expanding encroachment of media and growth in general. In retrospect, I could not have been more mistaken. New discoveries are made frequently throughout the world, and the field of study has grown exponentially. This is an art that has always been a part of the culture and will continue to exist as such. 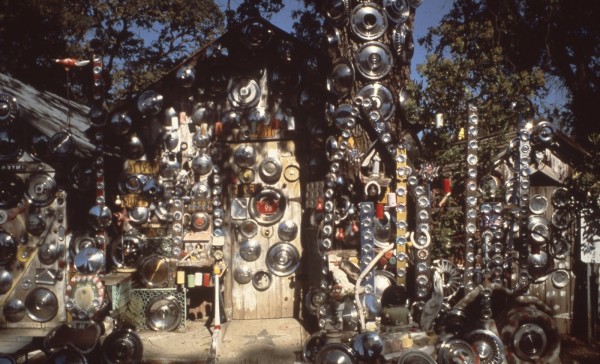 Tell us more about your own studio practice.

My early work as a student at the University of Kansas was as a painter and after entering graduate school at Cornell University, I became interested in object making. I have continued to make objects as part of my studio practice however for the past 9 years my primary focus has been with woodblock printing and aquatint etching. 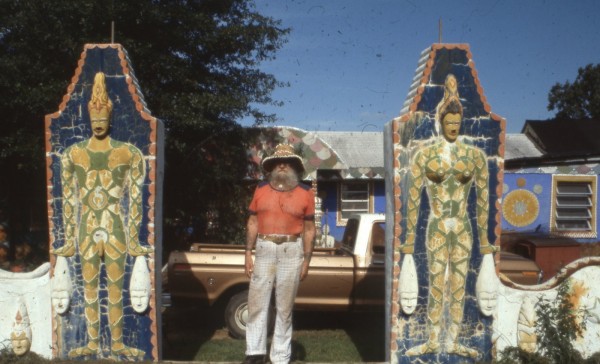 A selection of Blasdel's images of Clarence Schmidt's House of Mirrors will be on view at the John Michael Kohler Arts Center in Sheboygan, Wisconsin, from April 18 to August 14, 2021. Learn more here.