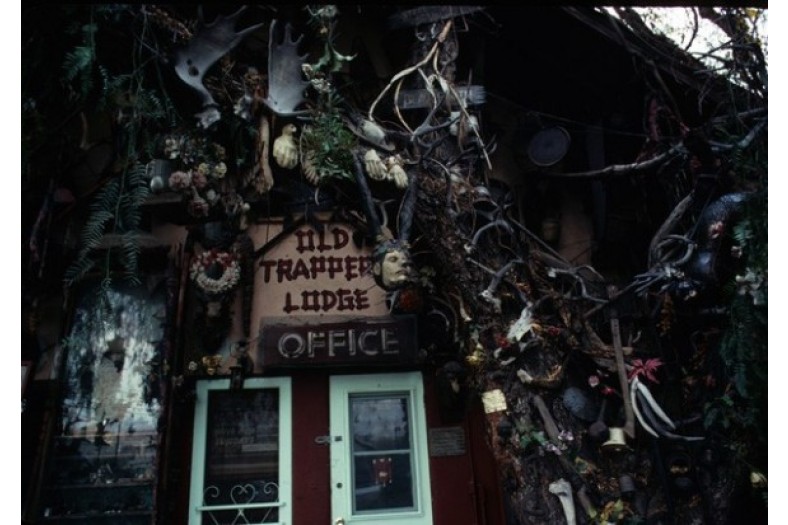 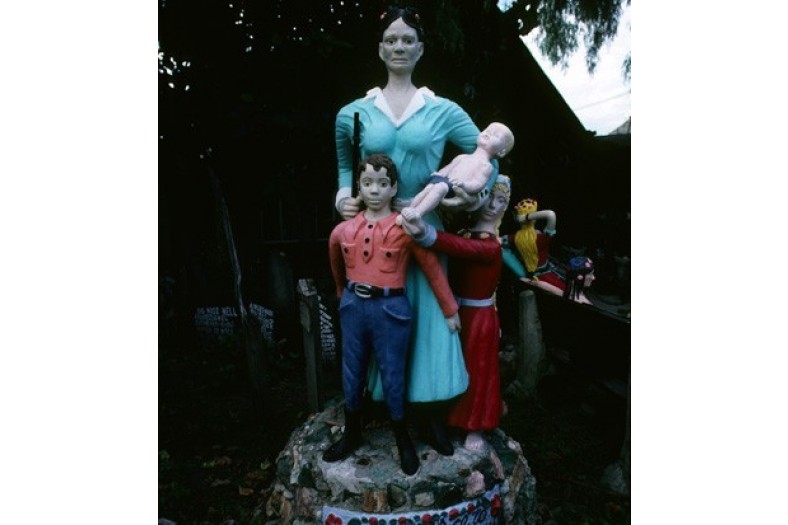 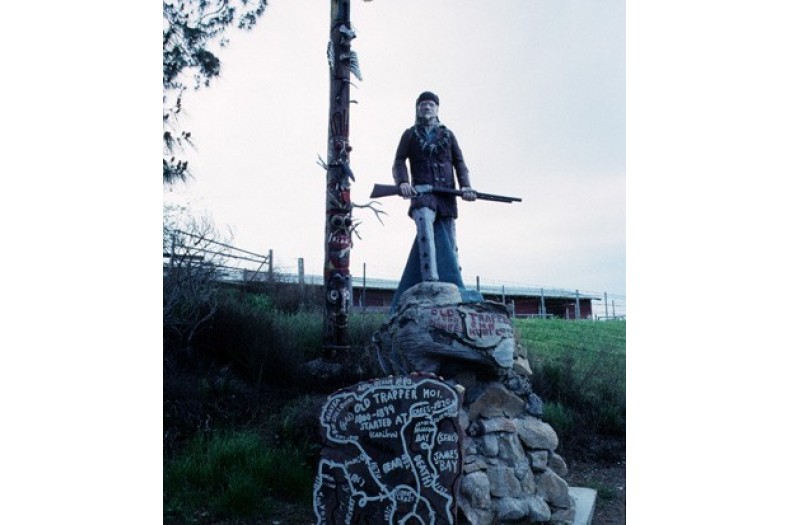 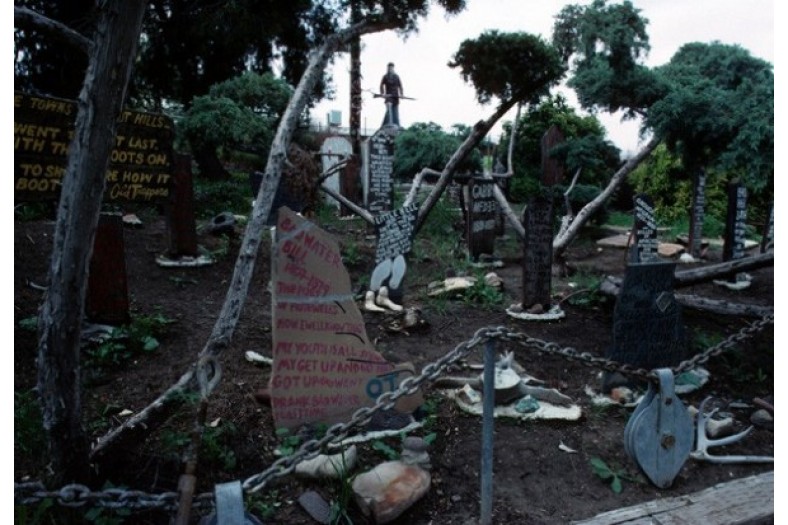 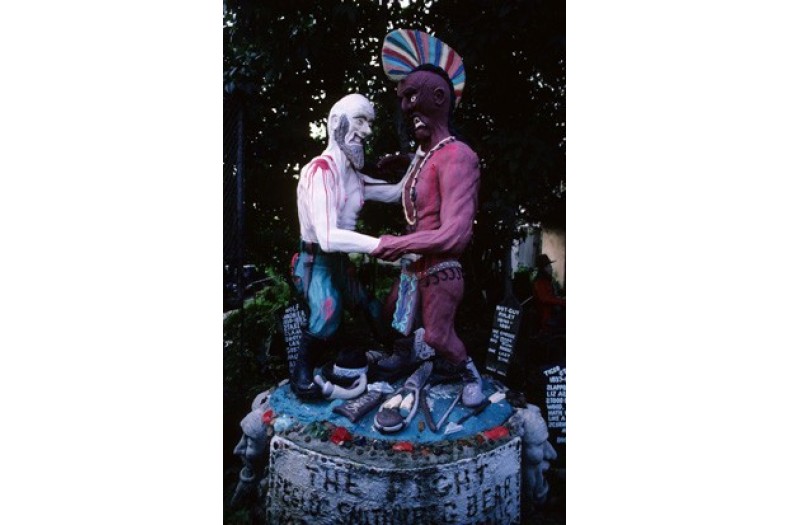 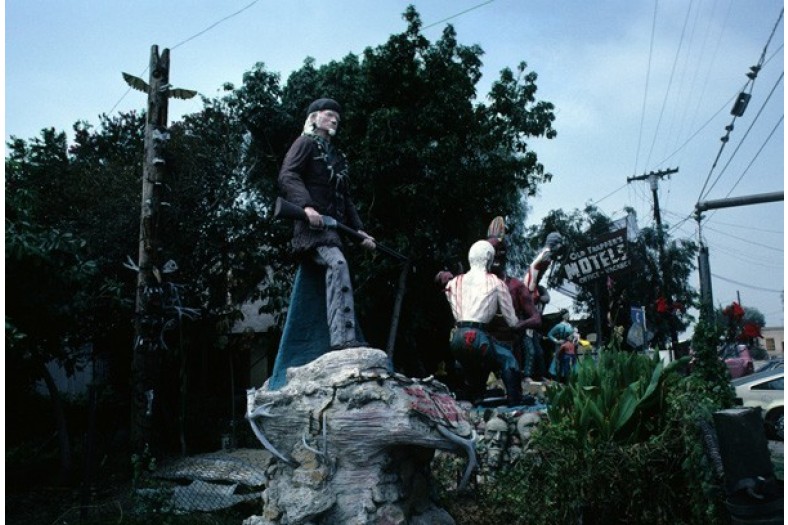 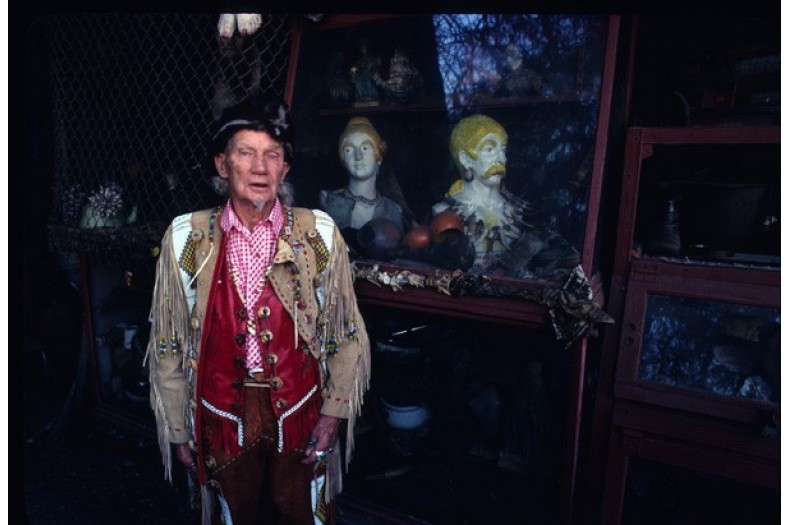 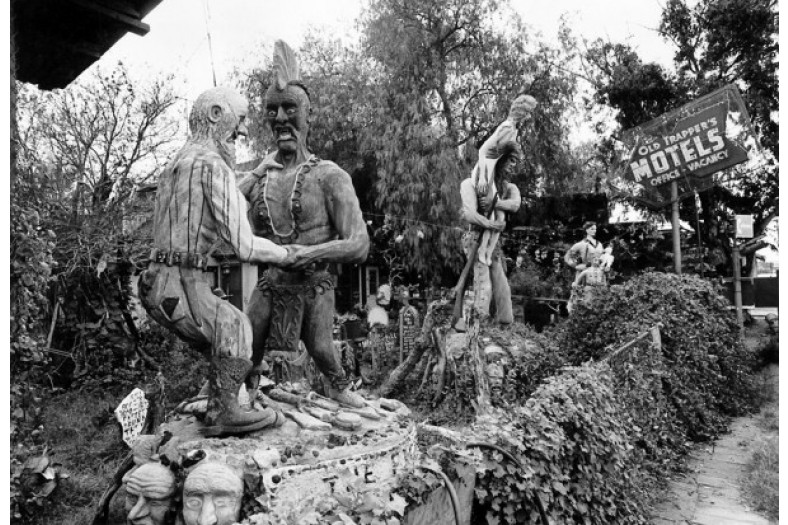 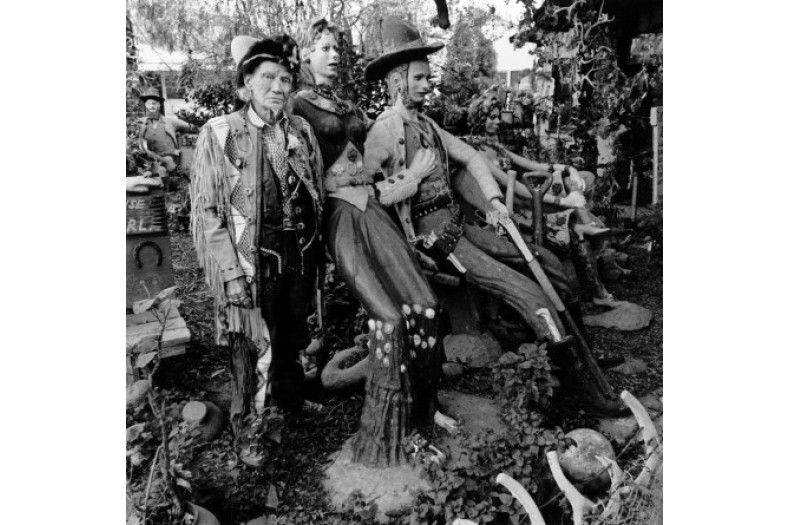 Old Trapper’s Lodge was named a California State Historical Landmark in 1981, the year John Ehn died. In the mid-1980s, to ensure the continued maintenance of his monumental sculptures, several were relocated to the grounds of Pierce College in Woodland Hills, California, where they are available for public viewing. A number of smaller sculptural works can also be seen at the Oakland Museum of California.﻿

Johan Henry (“John”) was born in Violet, a temporary lodging camp near Gould City, Michigan. His ancestors were Finish and Swedish immigrants who worked in the United States as lumbermen, farmers, and commercial fishers. Ehn married in 1921 and worked for the State of Michigan’s Field and Game Department as a game warden. He then moved with his family to Florida; for five years he trapped alligators and snakes, inspiring him to write and to publish How to Snare: The Best Kept Secrets of Trapper John, a series of ten correspondence courses. Ehn would continue to mail his courses, along with scents and trapping supplies, until his death.

In 1940, a spinal inflammation forced Ehn to give up trapping. He moved with his family to Roscoe in Southern California and opened a motel. He later named the property to reflect his former occupation, and dressed the part, wearing Western clothes and sporting a goatee and pierced ears.

After watching sculptor Claude Bell at work at Knott’s Berry Farm, a Buena Park, California theme park, Ehn hired the artist in 1951 to portray him as a trapper in a giant concrete sculpture. After three days, Ehn felt he had learned all the techniques he needed to work alone. Working in the front yard of his motel, he began building a series of sculptures he later called “Boot Hill Cemetery.” Each sculpture began with a strong wire armature he covered with cement, often adding a final application of brightly colored paint.

For the next fifteen years, Ehn constructed the cemetery figures and another series he called the “Old West Mooseum.” A friend occasionally helped with signage, but Ehn built the sculptures alone. His “Boot Hill Cemetery” was intended as a family memorial: he built the faces of his statues around life masks he made of family members. The characters they portrayed were from favorite folksongs and stories. A tombstone epitaph described the alleged demise of each sculpted character.

Ehn also decorated the walls of his motel with a collection of animal skins, tools, and other memorabilia he’d accumulated over a lifetime. His office was filled with trapping paraphernalia, guns, and photomontages.

Old Trapper’s Lodge was named a California State Historical Landmark in 1981, the year John Ehn died. In the mid-1980s, to ensure the continued maintenance of his monumental sculptures, several were relocated to the grounds of Pierce College in Woodland Hills, California, where they are available for public viewing. 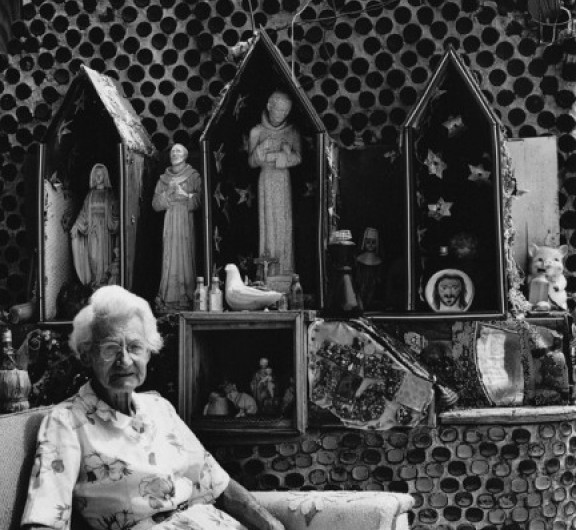 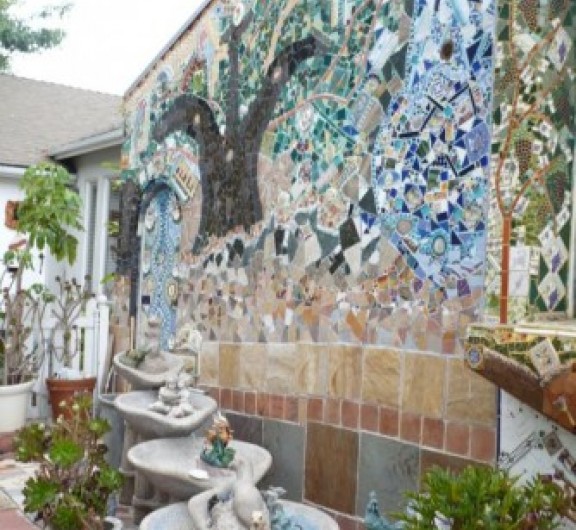 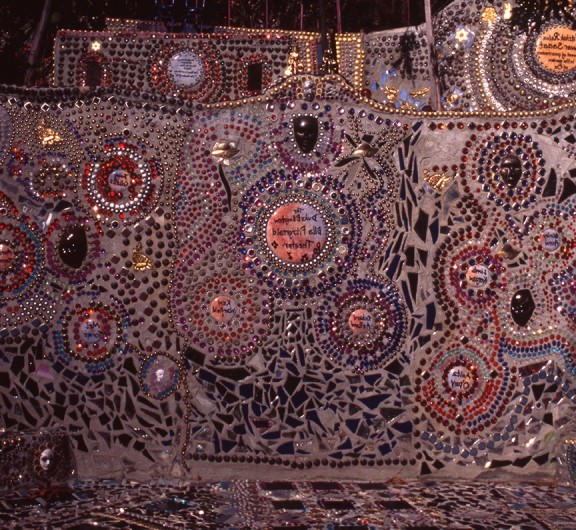 The Garden of Oz 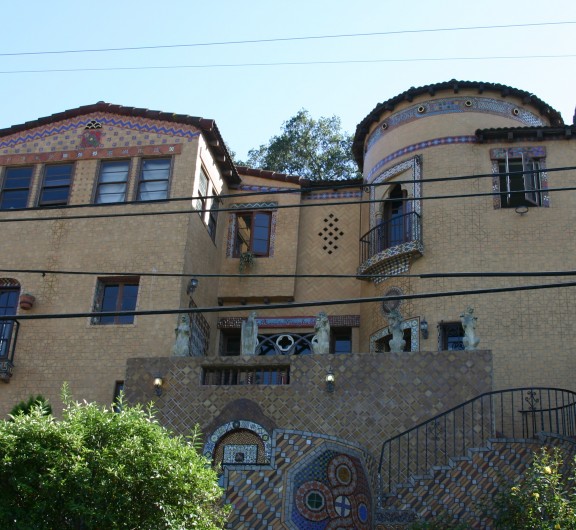 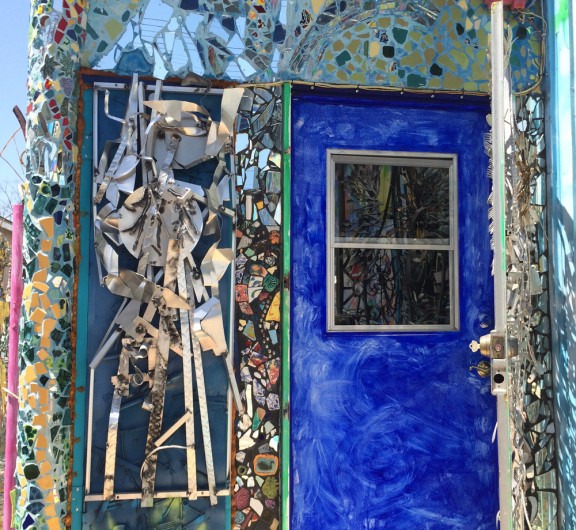 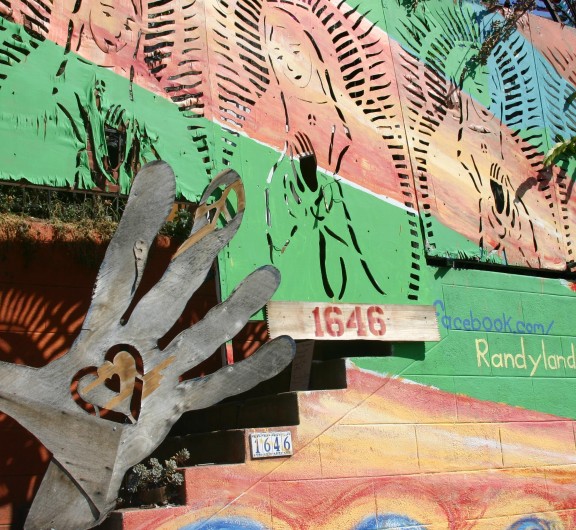